One of the newest IPOs to hit the market is open-sourced database software company MongoDB (NASDAQ:MDB), which went public Oct. 19 at $24 per share and subsequently spiked 34%, before settling back in the $30 range, for roughly a $1.5 billion market capitalization.

MongoDB was founded in 2007 by DoubleClick founders Dwight Merriman, Eliot Horowitz, and Kevin Ryan, who were frustrated by the rigidity and limits of traditional relational databases. The company was backed by many high-profile venture capital firms such as Sequoia Capital (16.9% ownership), Flybridge (11.6%), Union Square (9.7%), and NEA (7.2%). 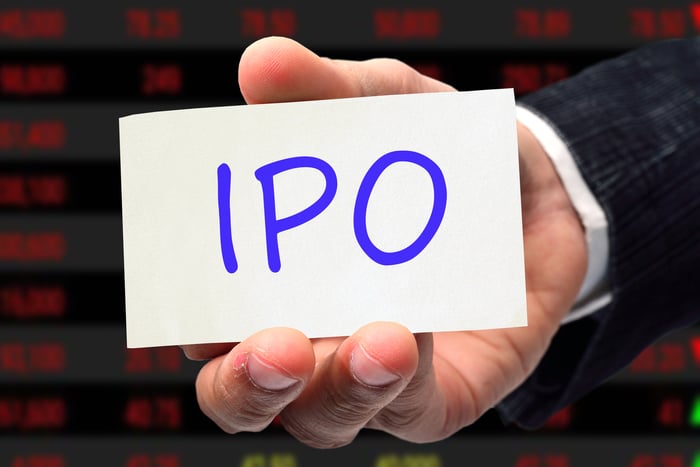 MongoDB claims it's the leading "modern" database platform (meaning built after 2000), combining the best features of relational databases (security, stability) with the flexibility and scalability of NoSQL databases.

In addition, MongoDB has a somewhat unique "freemium" model, whereby it makes the basic platform available for free. This allows potential customers to gain familiarity with the platform and build applications on Mongo before deciding to purchase.

The company seeks to convert these users either to its Enterprise Advanced subscription, a full-service support subscription with security, analytics integration, and technical support, or its newer offering called MongoDb Atlas, its lower-priced database-as-a-service hosted in a public cloud.

The company's free Community Server has been downloaded an impressive 30 million times, leading to 4,300 paying customers, including more than 50% of the Fortune 100. That's up from 3,200 as of Jan. 31, showing extremely rapid growth. Since the company charges customers based on usage, it has also posted a net expansion rate over 120% for each of the past 10 quarters, including 128% for the past six months, meaning existing customers increased payments to MongoDB by 28% from a year ago, without accounting for new customer additions. Here's a graph of the company's expansion per yearly "cohort" from its S-1. 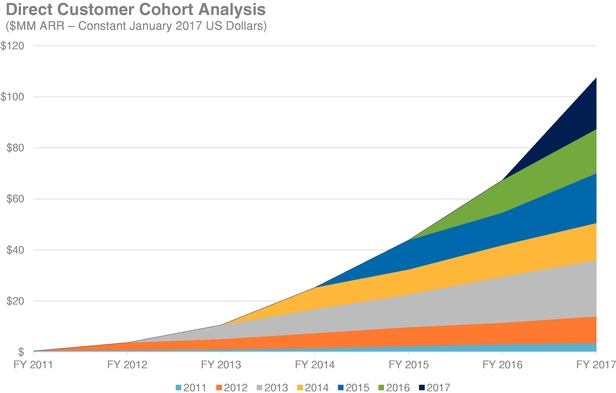 Overall, the company has grown revenues to almost $68 million for the past six months for an average annual run rate of $136 million, an impressive 51% growth over the same period in 2016.

Of course, as with many new tech IPOs, the company loses money, posting over $45 million in losses in just the past six months, for a run rate of over $90 million.

The company claims that its heavy spending is mostly geared toward new customers, and claims older customers are profitable. Mongo offers a graph showing the "contribution margin," which includes specific costs to maintain a particular customer, on its 2015 cohort is actually now 60%: 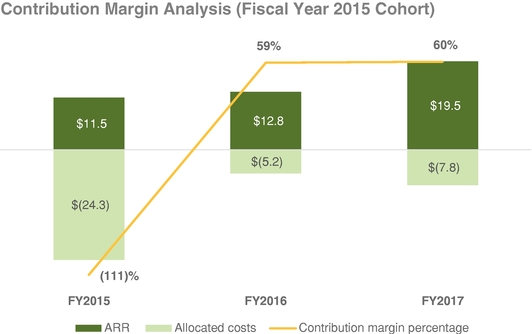 As with many young tech companies, the company will have two classes of common stock, with insiders owning Class B shares, which will have 10 times the voting power as the lowly A shares that you or I can now buy on the public markets. That means common shareholders won't have much say in operations.

In addition, the company's IPO price of $24 per share, or $1.2 billion, is below the company's $1.6 billion valuation in its most recent private funding round in 2015. MongoDB currently trades at an enterprise value-to-sales ratio of roughly 9.1, which is in between other high-growth software IPOs from this year such as Mulesoft, (12) Okta (12.3), and Cloudera (5.62).

MongoDB is also up against strong competition, not only from the 800-pound database gorilla, Oracle, but also cloud vendors  Amazon, Microsoft, Alphabet, IBM, Hadoop distributor MapR, as well as other non-relational upstarts Couchbase and Marklogic. That's a daunting lineup, but MongoDb is widely regarded as a leader of the new crowd of non-relational database vendors, and scores above most others on G2 Crowd, a site that rates enterprise software vendors. Moreover, the company's rapid growth shows the product is being well-received.

It's risky to buy a company on its IPO, especially one that is up against such strong competition and is burning through a lot of money. That being said, as an emerging leader in the massive $44.6 billion database industry -- and one that is growing 8% per year, MongoDB is certainly a name to keep on your watchlist.