Net-lease real estate investment trust Realty Income (NYSE:O) is a favorite among income investors, with monthly dividends that grow steadily over time. However, the stock hasn't done particularly well in 2017. In fact, as of mid-November, Realty Income has declined by 1.6% so far this year and is barely in the black even when factoring in dividends. In contrast, the overall stock market has had a great year so far, with the S&P 500 up by nearly 15%.

Here's why Realty Income hasn't done too well this year, and whether 2018 could be a stronger year for the popular REIT and its investors. 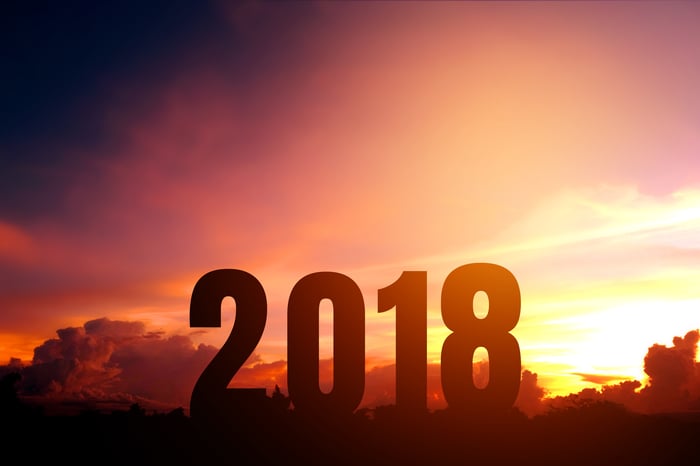 Realty Income's stock has fallen in 2017. But why?

The poor stock performance of Realty Income, as well as most of its peers, can be attributed to a couple of specific factors.

First is the rising-rate environment. The U.S. economy in 2017 has performed better than most experts had predicted, and the Federal Reserve has started a cycle of rate increases that's expected to continue for another couple of years at a minimum.

Rising interest rates, as well as the expectation of rising rates in the near future, are generally negative catalysts for high-dividend stocks such as REITs. In a nutshell, investors expect to get paid a premium over the "risk-free" interest rate for the risk they take with stocks.

Consider this simplified example. If a 10-year Treasury bond pays 2% and a certain REIT pays 5%, it might be worth the extra risk to achieve a higher level of income. On the other hand, if the 10-year Treasury yield spikes to 4%, it may not be worth the added risk of stock ownership to achieve a small increase in income. So this would be likely to put downward pressure on the REIT's price, which would in turn drive the REIT's dividend yield higher.

Another negative catalyst is the headwinds facing the retail sector right now. By the end of the third quarter, there had been 22 major retail bankruptcies in 2017 alone, which understandably makes anything related to the retail sector seem like a high-risk investment.

In fact, the Dow Jones Equity REIT Index has risen by 6.6% in 2017 -- still underperforming the S&P 500 thanks to interest rates, but not a terrible return. On the other hand, the Dow Jones U.S. Retail REITs Index has fallen by 12.3%. So Realty Income has actually held up better than most other retail-focused REITs. 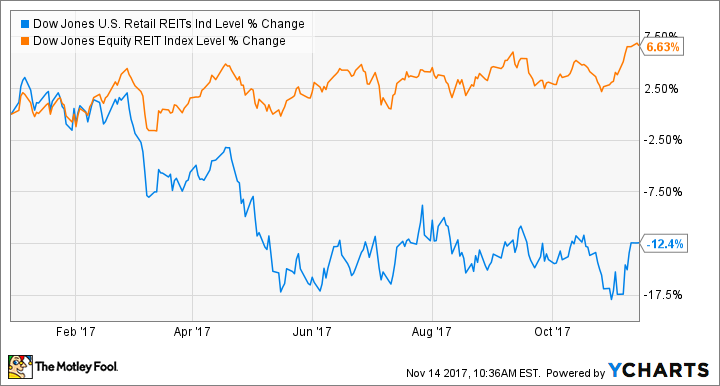 However, the business is doing just fine

Just to name a few highlights from the first nine months of 2017:

What does 2018 hold for Realty Income?

No matter what the economic environment, I'd be hesitant to say that any year could be Realty Income's best ever, simply because the company has a pretty impressive history of delivering strong returns for its shareholders. In fact, the company's annualized total return since 1994 is over 16%, and the stock has delivered total returns in excess of 30% in eight separate years since that time.

Having said that, I think that there's a strong chance that Realty Income's stock will perform better in 2018 than it did in 2017. At this point, I believe the expectation of rising interest rate is mostly priced in to the stock's price, as is the general weakness in the retail sector. In fact, if interest rates end up rising slower than the current ambitious expectations, or if the retail headwinds start to clear up, it could be a nice positive catalyst.

What I can say with a high level of confidence is that Realty Income's business will continue to do well. That's my primary motivation for investing in the stock -- consistent, predictable income and growth over time. There's no way to say with any reliable level of accuracy what Realty Income's stock will do in any given year, but as long as the company keeps doing what it's doing, the long-term returns will continue to be strong.