When evaluating most stocks, the most common metric to assess whether a stock is cheap or expensive, and to compare it to peers, is the price-to-earnings ratio, or P/E. While this is usually a good place to start, it doesn't really work for REITs. Price-to-earnings can make a REIT seem much more expensive than it actually is -- for example, popular retail REIT Realty Income (NYSE:O) has an astronomical P/E ratio of 47.6 based on its TTM earnings or net income.

Here's why P/E doesn't work for REITs, and why you should use P/FFO instead.

Why REIT "earnings" can be misleading

There is one aspect of earnings, or net income, calculations that makes it an inaccurate way to describe REIT profitability: depreciation. Businesses are allowed to deduct a portion of certain assets each year for tax purposes, in order to reflect the fact that things like machinery and equipment deteriorate over time and will eventually need to be replaced. Instead of deducting a new piece of equipment all at once, it is typically beneficial to extend the deduction over time. 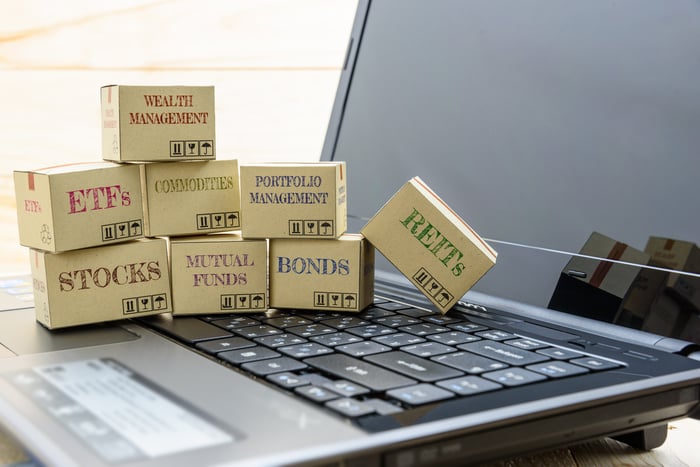 For a REIT, the depreciation deduction is used on the properties the company owns. This is a great tax benefit, but the problem is that in addition to the tax benefit, depreciation is counted against earnings as a "business expense." For most businesses this makes sense – worn-out equipment means that the business' assets are less valuable.

However, as we know, the value of real estate does not usually decrease over time. In fact, the exact opposite is generally true.

In other words, the traditional earnings calculation makes it appear that a REITs properties are losing value and will eventually be worthless, while in reality, the company's assets aren't losing value at all.

Basically, FFO adds back in the depreciation "expense" and makes a few other (smaller) adjustments to better reflect how profitable a REIT was for the quarter or year.

To better illustrate this point, recall that I mentioned Realty Income's P/E ratio of 47.6. Here's how the company's third-quarter 2015 earnings can be translated into FFO:

There is a big difference between net income and FFO. In the chart, the $162.2 million FFO figure gives investors a better idea of how much money is generated that can be used to pay dividends.

It's also worth mentioning that many REITs use adjusted FFO or normalized FFO on their earnings reports as well. These incorporate some company-specific items in order to produce an even more accurate picture of profitability, but keep in mind that the exact calculation methods can vary between companies. So, if FFO is available, it is the best comparative metric. If a company only provides an adjusted FFO, it is usually within a few cents per share of standard FFO and can still be a useful comparison tool.

Using P/FFO to compare REITs
To show how we can use P/FFO to compare the profitability of REITs, consider three REITs that own retail properties -- Realty Income, Simon Property Group (NYSE:SPG), and EPR Properties (NYSE:EPR).

Realty Income owns about 4,400 properties, most of which are free-standing retail buildings. The company's portfolio is mainly made up of retailers with one of three business types:

In other words, the company buys properties that people have to physically go to -- these have little or no competitive threat from online competitors.

Simon Property Group specializes in large-scale malls and is the largest publicly traded REIT in the United States. The company's property count may look small at 228, but keep in mind that these are massive buildings with many tenants in each. Most readers will be familiar with at least one of Simon's "Premium Outlets" or "The Mills" properties. To give you an idea of the diversity of Simon's income stream, consider that the company rents to more than 3,100 different tenants, compared with Realty Income's 235.

I would place Realty Income and Simon Property group in roughly the same risk category, and I recently did a head-to-head comparison of the two.

Finally, EPR properties is more of a smaller, niche REIT. With a market cap of $3.3 billion, the company is several times smaller than either of the others. EPR specializes in three different types of properties:

While the company does have an outstanding 99% occupancy rate, I would put it in a significantly higher risk category than the others because of its lack of diversification and the discretionary nature of its properties. For example, if the economy were to crash, people could stop going to the movies and playing golf to cut back on spending. However, they would still need prescriptions, groceries, and clothing -- needs which the other two REITs' properties could satisfy. Or, what if a law was passed that made it much more difficult to open a new charter school? The point is that EPR's revenue has more potential for vulnerability.

All three companies have strong balance sheets, good dividend and performance histories, and strong occupancy rates. However, when you evaluate the P/FFO of each, it's easy to see that EPR does trade at a significantly cheaper valuation, which is consistent with a higher perceived risk.

Note: P/FFO calculations use the midpoint of each company's FFO guidance. EPR Properties' FFO is reported as "normalized" FFO.

Other valuable REIT metrics
Price-to-FFO is an excellent place to start, but there are several other important REIT-specific metrics to know that can help you make wise investment choices. Here's a slideshow of seven metrics you need to know that can take your REIT investing to the next level.