Fitbit (NYSE:FIT) stock is down over 15% year to date as the company executes on its self-proclaimed "transition year". The most recent quarter wasn't one to write home about either, but looking under the covers, you'll see improvements in the business fundamentals.

Over the past year, the company has upped the quality of its revenue, expanded gross margins, reduced operational expenses, and all the while maintained a solid balance sheet.

Bad news: Fitbit revenue for the quarter was down 22% year over year. On the other hand, 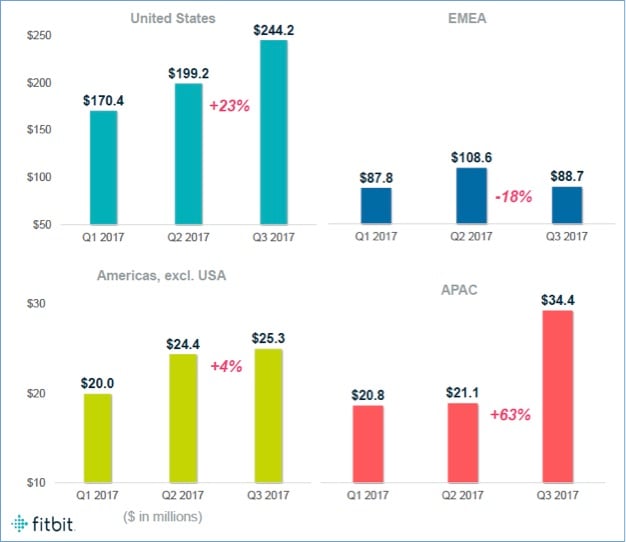 Expanding internationally helps diversify the company's revenue stream, and having more sales flow through a cost-effective online channel helps the bottom line. The company even turned in a record result on the one metric I've said that Fitbit investors should watch closely, its revenue per device sold. 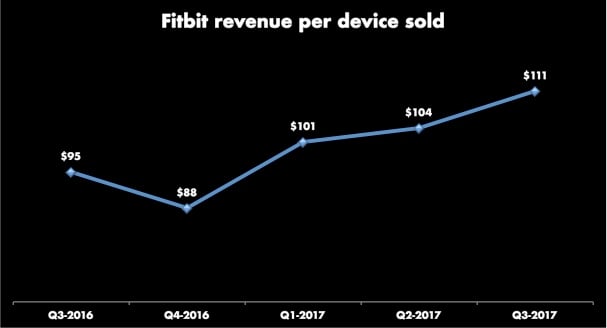 The one metric for Fitbit investors to watch. Graph and calculations by author. Data source: Fitbit earnings reports.

This recent high was driven by accessory revenue of $3.60 per device, premium subscription revenue, and sales of higher-priced trackers. While the quality of revenue improves, the company is also focused on its costs.

Gross margin, an indicator of how well a company is managing its production costs, was down to 44.5%. While trending downward year over year, the figure has improved sequentially. 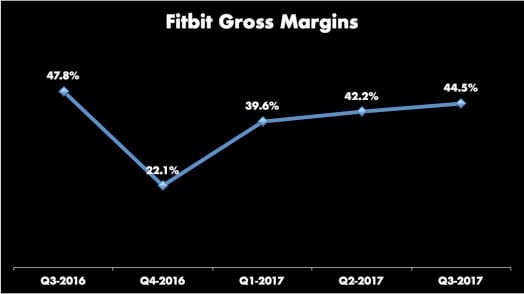 CFO Bill Zarella said the company "improved warranty terms in several countries and changed the replacement policy for our legacy products" -- good for customers but bad for margin. Zarella went on to say they achieved the company's long-term target for non-GAAP gross margin of 45%, which excludes the cost impact of stock-based compensation and intangible assets amortization. 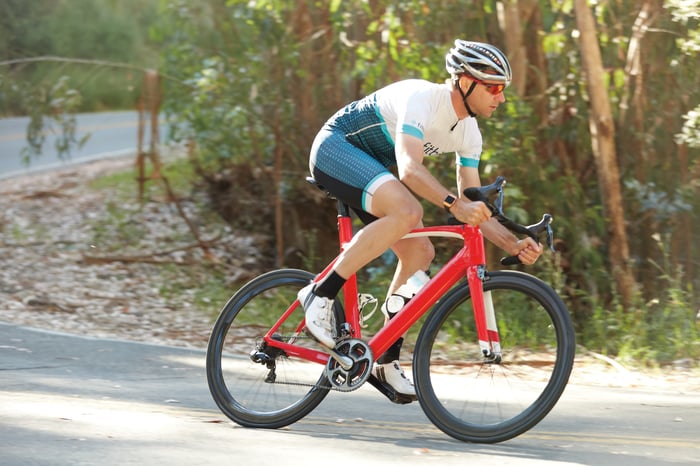 After a disastrous holiday season last year, the company committed to improving its non-GAAP operating expenses by a "run rate" of $200 million for 2017. Despite an $8 million one-time charge for the bankruptcy of a key customer this quarter, the company is on target to reach its goal of $850 million for 2017. While costs declined, the company has been able to keep its R&D spending essentially flat. It has moved more of its development activity to a low-cost Romanian engineering center which has allowed the company to increase its headcount for innovation research. Additional cost reductions were driven by moving to a licensing model for accessories, which also helped revenue.

The combination of growing revenue and falling costs should lead to more profits, but the picture isn't that straightforward for Fitbit.

Quality is helping the bottom line

CEO James Park indicated the company exited "the quarter adjusted EBITDA positive". While that sounds great, GAAP accounting shows the company posted a net loss of $113.4 million. The difference between the two is mainly due to $86.2 million in taxes and $22.8 million in stock-based compensation. Taxes were abnormally high this quarter due to revaluing its deferred tax assets, which shouldn't be a recurring issue. While the bottom line isn't pretty, the company's GAAP operating income (income before taxes and interest expenses) is moving in the right direction.

One reason for this progress is the company's 36% decline in defective parts per million over the last nine months. This was likely driven by Jeff Devine, the company's first executive vice president of operations, who was hired after the company racked up $178 million in quality and supply chain-related costs. Warranty charges during the quarter fell more than $20 million from the previous year.

Despite the ongoing weakness of Fitbit stock, the company's actions so far have had an important impact on the underlying business, and that's what investors want to see during a rebuilding year. With a healthy $656 million in cash and marketable securities on the balance sheet, Fitbit has plenty of flexibility regarding how to proceed going forward.