Please ensure Javascript is enabled for purposes of website accessibility
Log In Help Join The Motley Fool
Free Article Join Over 1 Million Premium Members And Get More In-Depth Stock Guidance and Research
By Harsh Chauhan - Dec 21, 2017 at 11:33AM

Ambarella shares popped recently, but the momentum might not continue for long.

Ambarella (AMBA 0.83%) investors celebrated after the company's third-quarter 2018 earnings performance turned out to be better than expected. Shares of the video processing chip specialist popped over 14% in a day as it met Wall Street's expectations on revenue and delivered a solid bottom-line beat.

But there's more to Ambarella's results than what meets the eye, and investors shouldn't get too excited about its latest quarterly report and guidance. Here's why.

Ambarella's revenue fell 11.4% year over year to $89.1 million in the latest quarter, in line with the company's guidance. But investors shouldn't forget that the chipmaker had reduced its full-year guidance back in September because of weak demand from several quarters.

Therefore, Ambarella met already-muted expectations, and its guidance was nothing to write home about, either. The company calls for $70 million in revenue at the midpoint of its guidance range for the fourth quarter, down almost 20% from the prior-year period.

So, Ambarella's revenue decline is going to get worse, while the company's margins are on the wane as well. Last quarter, the chipmaker's gross margin fell to 64% as compared to 66.3% in the prior-year period. Ambarella expects the weakness to continue as the gross margin is expected to remain between 62% and 63.5% this quarter.

This is probably because the company is being forced to lower the price of its chips to ward off the stiff competition it is facing across several growth markets. For instance, its GoPro-related revenue fell almost 47% year over year to $18.4 million during the quarter, and the 7.2% revenue growth from non-GoPro markets such as auto, IP security cameras, and drones wasn't fast enough. 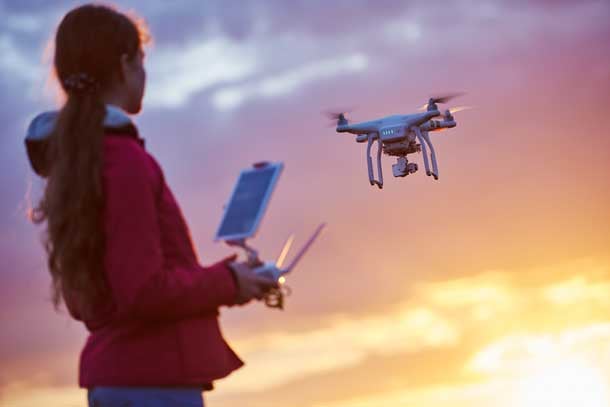 So, it is surprising to see investors getting excited about a tepid quarterly report in which Ambarella met dialed-down expectations. It didn't offer much in terms of forward-looking guidance, either, apart from CEO Fermi Wang's positive commentary about the upcoming CV1 computer vision chip.

However, it is too early for Ambarella investors to start celebrating the potential success of a product that hasn't hit the market yet.

Ambarella is pinning its hope on the adoption of the CV1 chip, which it will demonstrate at the Consumer Electronics Show in January. Wang has already started building up hype around this chip, stating that Ambarella has "solid execution in support of the development and delivery of our next generation of computer vision solutions."

Additionally, the company is meeting its "aggressive goal of demonstrating our CV1 performance to customers and commenced sampling in the security and automotive markets." However, there is a big difference between "sampling" and "shipping." Investors need to understand that the chip will still take time to hit the market as customers will need to evaluate its performance.

By that time, competitors such as Intel (INTC 0.82%) would have further advanced their computer vision technology, hurting Ambarella's prospects. For instance, Ambarella expects the CV1 chip to help it make big gains in the advanced driver assistance systems (ADAS) space. This could be big business for the chipmaker, as ADAS component shipments are expected to rise from 218 million units this year to 1.2 billion units in 2025.

But it will be difficult for Ambarella to crack this market, because Intel's Mobileye (NASDAQOTH:MBBYF) is trying to corner a bigger share of the ADAS market by upgrading its technology. Mobileye recently announced that it is working on a technology that will help autonomous cars avoid situations that put them in danger of a collision.

Its technology will use a mathematical formula that will forbid the autonomous vehicle from making a decision that puts it on a collision course, allowing the car to make faster decisions in real-world scenarios. At present, autonomous vehicles reportedly take six times longerto hit the brakes in an emergency situation when compared to manual driving.

So, Intel's Responsibility-Sensitive Safety technology could help autonomous vehicles anticipate dangerous situations well in advance, thanks to a combination of data from vehicle-mounted cameras, high-definition mapping, radar, and lidar systems. Mobileye is currently in the fifth generation of its computer vision technology, and its EyeQ5 chip could support fully autonomous driving.

More importantly, Mobileye enjoys strong relationships with no fewer than 25 automakers, which puts it well-ahead of Ambarella, whose technology is still to be tested in real-world conditions.

Therefore, investors seem to be bidding up Ambarella despite the lack of concrete catalysts that would help it stage a turnaround. Its business is on the wane, and the non-GoPro business isn't growing fast enough to warrant a turnaround. This is a red flag given that markets such as drones, IP security cameras, and automotive are expected to grow at a fast clip, and Ambarella has been unable to take advantage of the same, as its declining top line suggests.