Tech entrepreneurs are always looking for the next big thing, but as the legendary investor Peter Lynch once wrote, "[T]he next of something never is." First Round Capital recently surveyed 869 tech entrepreneurs to see which hot tech sectors they considered the most "overhyped," and virtual and augmented reality (VR/AR), wearables, and chatbots topped the list. 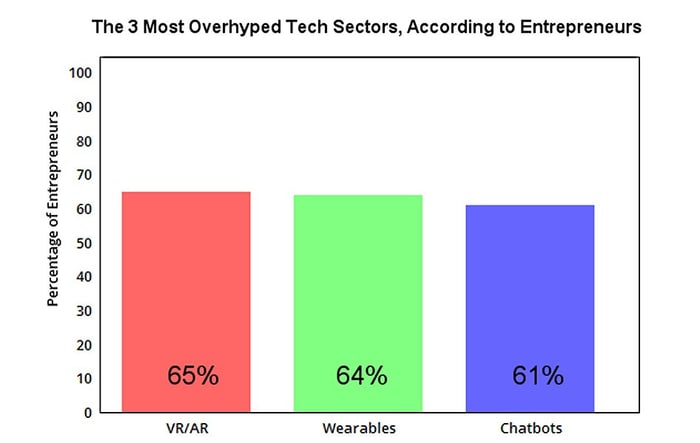 VR was considered the next big thing for decades, but it still has a tiny consumer footprint relative to devices like smartphones and tablets. Major hurdles within that market include high price points for VR headsets, confusing or restrictive hardware setups, weak developer support, and a lack of mainstream appeal. AR devices, like Microsoft's HoloLens, have been used for impressive tech demos, but their adoption remains limited.

The wearables market was on fire for a few years, but seemingly peaked as the it became saturated with fitness trackers and smartwatches. Chatbots also remain a mixed bag, with the limited capabilities of customer support bots deflating the idea that they could completely replace human representatives. Investors should exercise some healthy skepticism regarding new products in these arguably "overhyped" categories.