Were the social network’s chatbot ambitions ahead of their time?

Facebook (FB 1.22%) is reportedly scaling back its chatbot efforts on Messenger after the programs failed to fulfill 70% of users' requests. The Information reports that those requests couldn't be handled without human agents, and bots built by outside developers "had issues" because the "technology to understand human requests wasn't developed enough."

So instead of building a large ecosystem of chatbots, Facebook will train Messenger bots to handle "a narrower set of cases, so users aren't disappointed by the limitations of automation." Let's see what this strategic shift means for Facebook's AI efforts, and whether or not chatbots will ever become meaningful tools for the social network.

That's where Messenger comes in. In 2014, Facebook forced users to download the stand-alone Messenger app to keep chatting. That move -- which clearly mirrored Tencent's (TCEHY -0.23%) WeChat -- laid the foundations for Messenger to become a "platform" which could eventually offer ride hailing, mobile payments, deliveries, games and other services from a single app. 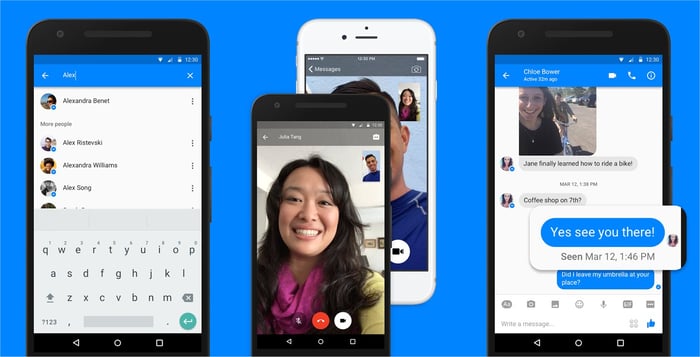 That move would give Facebook an "OS within an OS" to counter the iOS App Store and Alphabet's (GOOG 3.48%) (GOOGL 3.53%) Google Play. Facebook's next step would be to replace apps with Messenger chatbots, which were introduced last April. If that effort works, it could turn the entire mobile app store model upside down.

The premature rise of the chatbots

In theory, a business chatbot could answer questions, make purchase suggestions, process orders, and send shipping updates to customers. For customers, having "conversations" with these bots would feel more natural than scrolling and clicking through a mobile app. Companies could also cut costs by reducing the number of human customer service representatives.

Facebook tethers those bots to Messenger for Business, which provides a live customer service chat channel for a large number of businesses. Businesses can choose to put a human or a chatbot to handle queries on their end. This idea attracted a lot of early adopters -- 30,000 Facebook bots were already active on Messenger as of last September.

But just as Google struggled with low-quality apps over the years, Facebook's ecosystem quickly became bogged down with poorly produced chatbots. Badly made bots could annoy customers and tarnish a company's image -- so the company decided it's a better idea to send the bots back to the drawing board than expand the overall ecosystem.

The limitations of AI-powered bots were already clear when Facebook launched its chatbot APIs last year. For example, Microsoft (MSFT 1.78%) launched its chatbot Tay on Twitter as an experiment last March. Within 24 hours, Tay started tweeting racist and sexist comments, forcing Microsoft to abruptly pull the plug and issue an apology. Tencent has also struggled to purge spam and scam bots on WeChat since it started letting millions of accounts create their own bots.

Facebook's AI tech also wasn't that impressive prior to the arrival of its chatbots. Its News Feed struggled to discern fake news headlines from real ones, and its Messenger-based virtual assistant M hasn't gained much ground against Google Now or Siri.

Edison Investment analyst Richard Windsor -- who recently called Facebook a "laggard in AI" compared to Google -- stated that "when Facebook tries to automate its systems, things always go wrong." He also pointed out that while Facebook has hired plenty of AI talent, it simply hasn't been working on AI "for nearly long enough" to challenge market leaders like Google.

So what's next for Facebook's AI efforts?

Despite those missteps, Facebook probably won't stop investing in chatbots anytime soon. The company is expected to introduce new AI plans at its F8 conference in April, which will likely include ways to boost the quality, not quantity, of its Messenger bots. It could also introduce more ways to tether bots into other Messenger features -- like payments and games -- to increase the app's appeal as a stand-alone platform.