Please ensure Javascript is enabled for purposes of website accessibility
Log In Help Join The Motley Fool
Free Article Join Over 1 Million Premium Members And Get More In-Depth Stock Guidance and Research
By Leo Sun - Apr 18, 2016 at 8:40AM

The failure of Microsoft’s Tay exposes the dangers of using chatbots for business.

In late March, Microsoft (MSFT -1.32%) launched its Millennial-mimicking chatbot Tay on Twitter with disastrous results. Within a few hours, the bot started spewing racist and sexist tweets, forcing Microsoft to pull the plug before the day was done. Microsoft said it was "deeply sorry" for the incident, but noted that Tay was a "machine learning project designed for human engagement," so some of its responses were "inappropriate and indicative of the types of interactions some people (were) having with it."

Although it was clear that Microsoft didn't intend for Tay to devolve into a hateful bot, it clearly underestimated its ability to interact with thousands of humans at once, and naively pushed it into Twitter's rivers of hate without self-censoring capabilities.

It also possibly forced many companies to reconsider replacing human customer service representatives with chat bots. One such company which might be affected is Facebook (META -1.64%), which recently integrated chat bots directly into Messenger. These bots, which were recently revealed at its F8 conference, allow companies to engage customers through automated conversations instead of the use of traditional apps.

Facebook's game plan
Adding bots is just the latest expansion for Messenger, which recently topped 900 million monthly active users. After forcing its mobile users to download the stand-alone Messenger app two years ago, Facebook added stickers, apps, games, and peer-to-peer payments to the platform. That strategy was inspired by monolithic Asian chat apps like Naver's LINE and Tencent's WeChat -- which both bolted on additional apps and services to monetize their user bases.

Last March, Facebook unveiled Messenger for Business, which provides live customer service chat channels for a wide variety of businesses. Businesses could choose whether or not to use a human customer service rep or a bot on their end, while customers can opt in for shipping notifications on incoming orders. 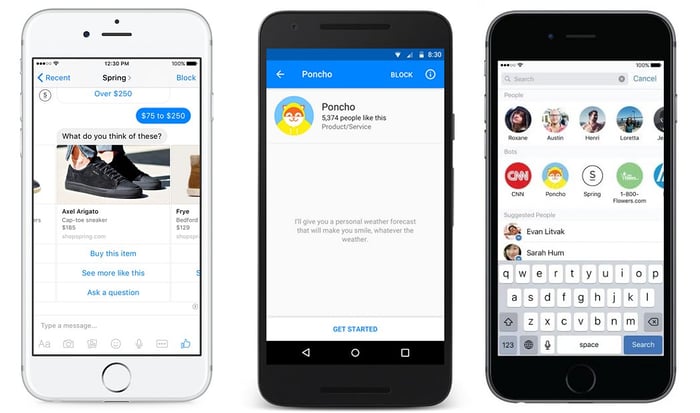 By integrating chat bots directly into Messenger, Facebook will try to disrupt Alphabet (GOOG -2.57%) (GOOGL -2.45%) and Apple's mobile ecosystems by having bots perform app-like actions. For example, 1-800-Flowers.com will allow its Messenger bot to act as "gift concierges" who "answer questions, make gifting suggestions, process orders, send shipping updates and provide an array of other important information such as gift reminders." Time Warner's CNN lets users chat with its bots to "get breaking news or personalized and specific stories" by typing in keywords.

If these bots work as advertised, they could help Facebook build a new bot-based ecosystem within Messenger which reduces the usage of traditional iOS and Android apps. If that happens, Facebook can mine more data from users within Messenger, craft better targeted ads, and generate more ad revenue.

But let's not get ahead of ourselves
Facebook's strategy is ambitious, but it's hardly original. Tencent let companies add bots to WeChat years ago. Russian messaging app Telegram has plenty of bots roaming within its network, while enterprise messaging start-up Slack offers automated services for answering questions or notifying team members about meetings and project updates. Messaging app Kik also recently integrated a Weather Channel bot.

Early reports also indicate that Facebook's Messenger bots aren't as clever as companies hoped they would be. Gizmodo's Darren Orf recently called them "frustrating and useless," and akin to "trying to talk politics with a toddler." The Messenger bots will likely improve over time, but they probably won't overtake mobile apps in usefulness anytime soon.

Since most Messenger bots have fairly limited "intelligence." it's unlikely that they'll experience a grand "social networking/machine learning" meltdown like Microsoft's Tay. However, using an inferior bot could still frustrate instead of help customers and tarnish a company's brand.

The bot battle is just beginning
I doubt that chat bots will fully replace human customer service reps over the next few years. They'll likely handle basic tasks, but I can't see companies replacing their entire customer service departments with algorithm-driven bots just yet. OS-based virtual assistants like Siri and Google Now could also override the importance of Messenger's internal bots by being directly integrated into apps.

Facebook likely knows that this clash is imminent, so it's trying to widen its moat with Messenger bots and its own virtual assistant, Facebook M. But as Microsoft's Tay has revealed, bots could be a very shaky foundation to build an entire ecosystem upon.