Choosing the more profitable of two vices: alcohol and tobacco.

A person could have quite a fun evening with the products made by Anheuser-Busch InBev (BUD -0.49%) and Philip Morris International (PM -1.59%). The two companies are top players in their respective fields of alcoholic beverages -- specifically beer -- and tobacco.

The business of both companies has changed in significant ways recently; in many respects, neither is in the same position it was for many years running. Let's take a look at that, and along the way determine which is the superior investment now. 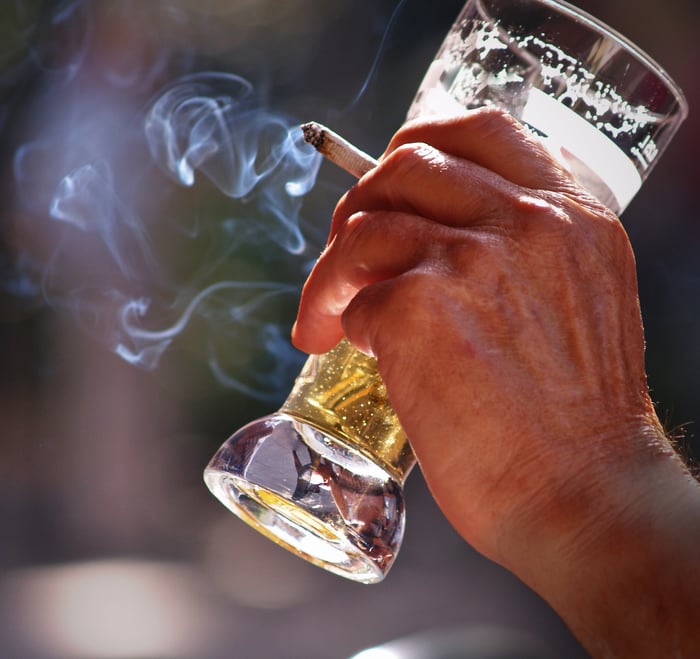 Have you quaffed a beer, anywhere in the world, anytime in the last year or so? If the answer's "yes," you've probably consumed a product sold by Anheuser-Busch.

The company became the global brewer in late 2016 following the close of its massive merger with SABMiller, which gave it a bulging portfolio of international brands.

Anheuser-Busch's marketing savvy, combined with the fatter portfolio, has sparked growth. In its Q3 it squeezed out more revenue in nearly every one of its regions.

Crucially, this included Latin America, which is its largest market in terms of sales. Revenue there rose by 11% year over year to $5.4 billion, helping lift the company's overall top line by almost 4% to $14.7 billion. Synergies from the merger contributed to an 89% increase in net profit to $2.6 billion.

However, the durable popularity of craft beers has affected the company's North American sales. Budweiser and Bud Light sales have declined, to the point where total North American sales fell by 4% during the quarter. The company has gotten into the craft-beer game itself with more exclusive, higher-quality beers, but it's facing more competition than it did in the past.

So North America is probably going to be a tough slog for Anheuser-Busch. Perhaps that's why the stock hasn't been too frothy since those results were announced; it's up only 14% from that time, against the 80% of the S&P 500. This steady and reliable dividend payer has, however, kept up its payout. At the moment, Anheuser-Busch delivers a relatively generous 3.9%.

For tobacco producers, it's better to be outside North America than inside it. The U.S. and Canada have become ever more strict with anti-smoking regulations, which haven't developed as far in other parts of the world.

Still, they're not helping the company's business. Worldwide, growth in cigarette consumption has weakened over the past few decades, and volume isn't doing much better. In fact, worldwide volumes slipped by more than 3% in 2016, according to research company Euromonitor. This figure, Euromonitor says, is "the worst volume loss in cigarettes in recent memory."

Considering that, Philip Morris' operations have held up fairly well. The company's cigarette volumes dropped by only 2% in Q4. Meanwhile, its heat-not-burn tobacco product IQOS is a runaway hit, with unit volume more than quadrupling to almost 16 billion units during the quarter. So the company's fiscal 2017 wasn't bad at all, with reported net revenue climbing 4% higher to over $78 billion, and adjusted EPS rising 20% to $1.32.

Thanks to their relatively modest production costs and the fairly inelastic demand for their product, tobacco producers tend to be very profitable and generate a lot of cash. That's why they're usually high dividend payers, and Philip Morris is no exception. The company's dividend currently yields 4.1%.

Heating up some growth

For me, Anheuser-Busch is basically an income stock these days. North Americans are clearly turning away from mass-market beers. Although the company can probably put up a half-decent fight in this category, it's probably not going to dominate like it did with the mass market in the old days. It should remain profitable, though, with enough cash to support an attractive payout.

Philip Morris has much more potential for growth. IQOS is a product that really has legs, tapping into the youth market's desire for goods that are healthier to consume (or, at least, are perceived that way). The company is only starting to apply the burn to IQOS, which at some point is certain to enter the North American market. It'll be sold there through a deal with ex-corporate sibling Altria.

So in that case, you've got a company looking at both a continued high dividend payout and strong growth prospects for the future. That's why my choice between these two stocks is unambiguously Philip Morris.