If a stock manages to double in a year's time, that's usually a good sign that the underlying business is doing something right. However, yesterday's big wins aren't necessarily an indication of what the future holds, and evaluating whether an investment thesis remains sound in relation to key performance indicators and price movement is a practice that can be hugely rewarding when properly applied.

To get an idea of whether some of 2017's biggest movers are on track to continue their winning streaks, we asked three Motley Fool investors to take a look at a stock that gained at least 100% last year and analyze its potential path ahead. Read on to see if they think Align Technology (NASDAQ:ALGN), Roku (NASDAQ:ROKU), and Take-Two Interactive (NASDAQ:TTWO) are still smart buys after posting explosive gains. 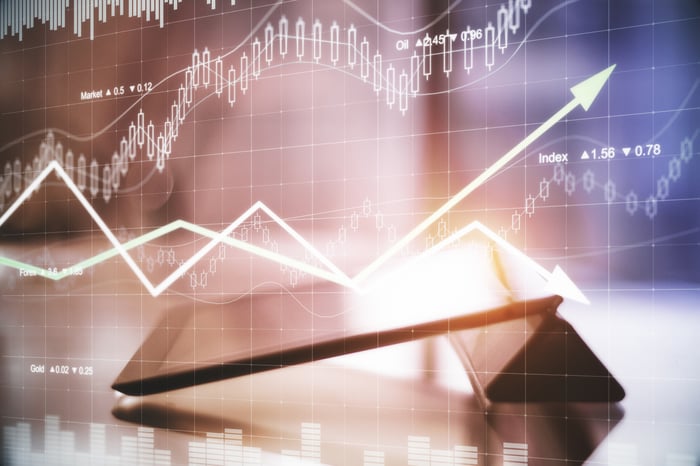 Another year lining up nicely

Keith Speights (Align Technology): The S&P 500 index's best performer of 2017 wasn't even in the index until nearly halfway through last year. Align Technology stock soared more than 130% in 2017, and at one point in late November was up almost 175%.

Align Technology continues to have a lot going for it. Sales for the company's primary product, Invisalign clear dental aligners, continue to soar. I think the momentum will continue. Align only claims around 10% of the current addressable market and only 4% of the teen market. The company is aggressively marketing Invisalign in the U.S. and in other countries. I expect those efforts to pay off.

Align hasn't limited itself to Invisalign, though. The company partnered with and bought a stake in SmileDirectClub (SDC), an at-home program for affordable, cosmetic teeth straightening. SDC sells clear aligners made by Align that aren't under the Invisalign brand. In addition, Align markets intra-oral scanners that are a great fit with its aligner business.

2018 is shaping up to be another great year for the company. I don't know if the stock will double again this year, but I liked Align so much that I bought it a couple of months ago.

That cooldown was caused by several factors. Sales of its streaming devices are declining, due to competition from rival devices. That's why its hardware revenue, which accounted for 55% of its top line, fell 7% annually last quarter. The unit's gross margin also fell 480 basis points annually to 9.5%.

Roku's guidance for 20% to 30% annual revenue growth during the first quarter missed expectations for 32% growth. The midpoint of that guidance, 25%, would represent a slowdown from its 28% growth in the fourth quarter.

However, Roku's platform unit (partnership, licensing, and advertising) revenue, which accounted for 45% of its top line, soared 129% year over year last quarter and offset its hardware declines. The growth of that higher-margin business, which had a gross margin of 74.6% last quarter, helped Roku more than double its earnings before interest, taxes, depreciation, and amortization, and post a profit of $0.06 per share -- which beat expectations by $0.16. Roku's total active accounts and revenue per user also grew 44% and 48%, respectively.

Roku might look tempting, but the stock is still richly valued at eight times sales. There also isn't any guarantee that its platform business will keep offsetting its hardware declines. I'll keep an eye on Roku, but I'm in no hurry to buy.

Keith Noonan (Take-Two Interactive): Video game stocks have been red-hot in recent years, and no major publisher in the space posted bigger gains in 2017 than Take-Two Interactive. The company, most known for its hugely successful Grand Theft Auto franchise, saw its share price climb roughly 120% last year -- fantastic for shareholders but also good cause to reevaluate whether this momentum can be sustained. As with most stocks that post such substantial returns in a relatively short period of time, Take-Two's rapid capital appreciation has created added risk, but I think it's also true that the company's growth prospects have never looked stronger.

The publisher announced in early February that shipments for Grand Theft Auto V had reached more than 90 million copies -- up from 75 million copies shipped by February 2017. That's incredible sales momentum for software that first released back in 2013, and cements the title as one of the most successful games ever. More importantly, it looks like GTA V and its online mode will continue to be high-margin sales drivers for years to come. Take-Two is also ramping up its development efforts in order to release blockbuster games on a more regular basis and improve its position in the fast-growing mobile-games space.

In addition to strengthening its product pipeline, the company is on track to continue benefiting from broader gaming industry tailwinds. Software sales continue to migrate to digital channels, cutting down on the costs associated with physical distribution, and growth for in-game purchases is pushing margins higher and creating more dependable sales streams. The global audience for video games is only getting bigger as well. Take-Two stock isn't a low-risk investment, especially after huge gains in recent years, but I think it's on track to continue thriving and delivering wins for long-term shareholders.

These 3 Stocks Doubled in 2017 -- Are They Still Buys? @themotleyfool #stocks $ALGN $TTWO $ROKU Next Article
Current