The rivalry between Advanced Micro Devices (NASDAQ:AMD) and Intel (NASDAQ:INTC) dates back to the beginning of the PC era. Intel's x86 chipset created the foundation of the PC revolution, but AMD sought to offer an alternative to Intel's near-monopoly with PC chips of its own. Even though AMD long remained No. 2 in the PC chip arena, its move to jump into newer cutting-edge areas like mobile and video gaming has attracted attention from investors once again. Investors looking at the chip space with a new eye toward the industry's prospects want to know whether Intel or AMD is the smarter pick right now. Let's take a look at how AMD and Intel fare on a set of key measures of success.

Intel and AMD have moved in opposite directions over the past year. Intel has gained almost 50% since March 2017, compared to AMD's loss of nearly 25% over the same time frame.

Yet even though Intel has done so much better than AMD recently, the valuation of its shares still looks more attractive, at least by simple earnings-based metrics. Comparing trailing earnings is somewhat difficult right now, and even though Intel's trailing earnings multiple of 26 is far less than AMD's triple-digit figure, the one-time impact of tax reform-related issues has had an influence on the two companies' bottom lines. Yet when you look at near-term future projections, Intel's valuation advantage remains, with a forward earnings multiple of less than 14 comparing favorably to AMD's corresponding figure of nearly 20. On a valuation basis, Intel gets the nod. 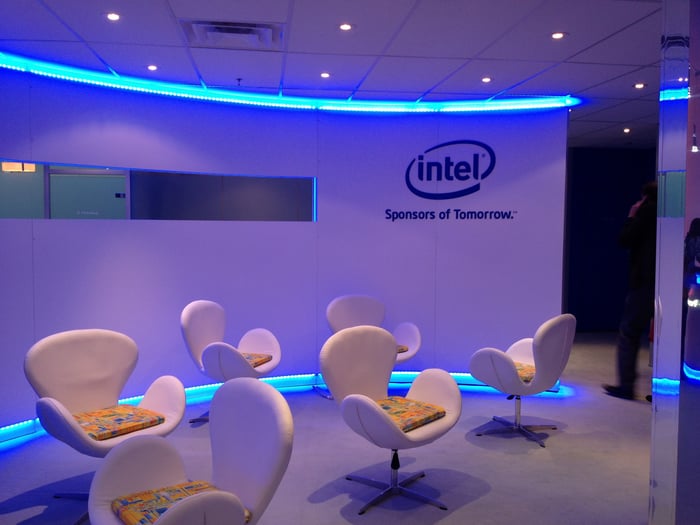 For dividend investors, the decision is even easier. Advanced Micro Devices doesn't pay a dividend. Intel does, and its current yield of 2.3% is above the market's average.

Intel isn't stretching itself to pay a dividend, with a payout ratio of right around 50% of its earnings. Dividend growth has been ample, including a 10% increase in January. The tech giant hasn't been able to make dividend increases each and every year, but it still has lifted its per-share payout consistently, and Intel now pays triple what it did in 2016. With AMD showing no signs of initiating a dividend anytime soon, Intel is the clear choice for dividend investors.

Both AMD and Intel have the ability to grow further from their current levels, but they're pursuing different priorities. AMD has hitched its business to the budding cryptocurrency market, taking advantage of the fact that miners of bitcoin and other crypto assets have high demand for the graphics processing units that AMD makes. That new business helped AMD hold its own throughout 2017, but so far this year, the rise in bitcoin has come to an abrupt halt. Investors increasingly fear that if demand for GPUs from cryptocurrency miners falls sharply, AMD could get left facing a huge downturn. With investors only now getting used to the idea of AMD potentially being able to show a consistent profit, the last thing the company needs is a reversal of fortune in what has become a key business.

Meanwhile, Intel has faced similarly difficult challenges. The company failed to take full advantage of the mobile revolution, leaving it scrambling to try to catch up. Strategically, Intel has sought to play to its strengths, but even there, the company hasn't been able to show unqualified success. For instance, the company's chip manufacturing technology has historically been at the top of the market, but recent data suggest that its 10-nanometer manufacturing facilities aren't yet making products that Intel and its fabrication customers can sell. While the newer Ice Lake chip family could change that for the better, Intel investors have waited a long time for good news and don't want to be disappointed once again.

Both AMD and Intel have risks, but Intel's foundation is stronger than AMD's. If cryptocurrency trends remain depressed, then a lot of negatives could weigh deeply on AMD's ability to build a future successfully. Intel has time to come up with a viable strategic vision, as well as the resources to make it happen. As long as it can find a smart way to move forward, Intel should have the edge.