2017 was a comeback year for Advanced Micro Devices (NASDAQ:AMD). Revenue soared 25% thanks to the introduction of new CPUs and GPUs, and the company turned its first annual profit since 2011. The stock slumped more than 9%, but that came after a nearly 300% surge in 2016.

AMD's success last year was driven in part by the mania surrounding cryptocurrencies. Interest in cryptocurrency mining led to increased demand for graphics cards, pushing up prices and providing a significant tailwind for AMD's graphics business. A quick check on Newegg.com shows AMD's RX Vega 56 graphics card, with an MSRP of $399, selling for as much as $1,000.

This is all good news for AMD -- at least for now. But because a big chunk of AMD's growth last year was tied to cryptocurrency, a crash in the cryptocurrency markets could derail AMD's turnaround. 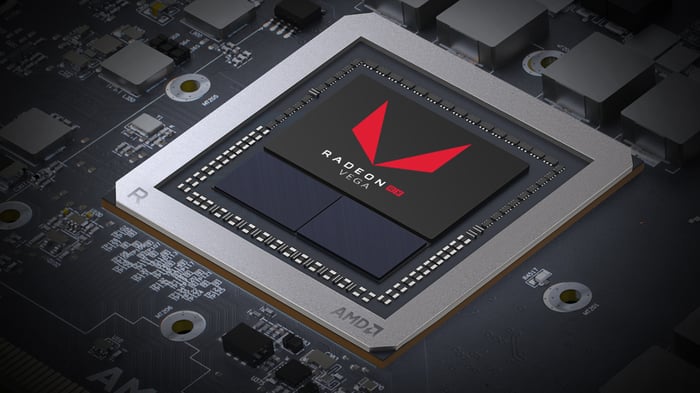 In AMD's latest annual report, filed with the SEC on Feb. 27, the company discussed the risks associated with cryptocurrency. In the risk factors section of the filing, AMD had this to say:

That number may be on the low side. Jon Peddie Research, which tracks GPU sales each quarter, recently put out its fourth-quarter report. Jon Peddie put total GPU sales to cryptocurrency miners in 2017 at $776 million, adding that AMD was the primary benefactor. If you assume AMD captured two-thirds of those sales, cryptocurrency-related sales would be closer to $500 million for the company.

If that $500 million figure is close to the real amount, nearly half of AMD's revenue growth in 2017 came from cryptocurrency-related sales in 2017. If demand from cryptocurrency miners plunged, AMD would take a significant revenue hit.

The mania surrounding cryptocurrencies won't last forever. There's no telling exactly how or when the bubble will burst. It could go on for years, in which case AMD would continue to benefit by selling GPUs into the cryptocurrency market.

But it could also end at any time. According to Su, AMD is ramping its production of GPUs in an effort to keep up with demand. That's a strategy that will work until it doesn't, since so much of that demand could disappear without a trace.

AMD has other products that can drive growth, including its Ryzen PC CPUs and EPYC server CPUs, both of which have put the company in a vastly improved competitive position compared to its previous generation of products. But that may not be enough to fully offset slumping demand for graphics cards in the event of a cryptocurrency crash.