Volkswagen AG's (OTC:VWAGY) U.S. unit is teaming up with four suppliers, including chip powerhouse NVIDIA (NASDAQ:NVDA), to deal with a key technical challenge facing developers of self-driving cars: moving all the data around inside the car.

A new "alliance" plans to create a key standard 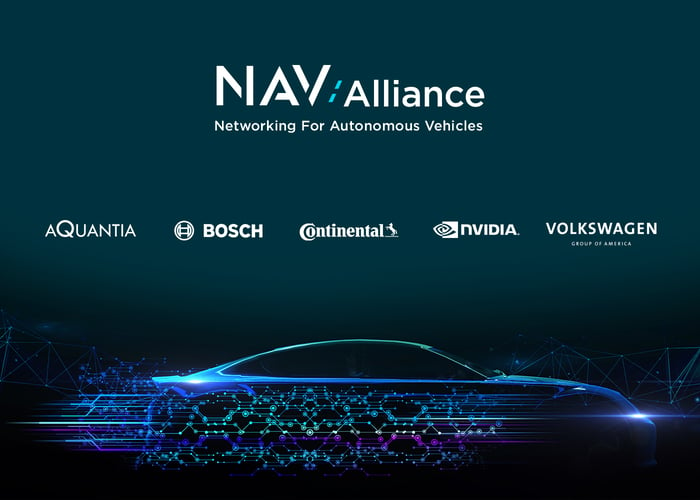 The NAV Alliance said in a statement that it plans to create a new set of standards for high-speed in-vehicle networks. The hope is that the new standards are adopted widely within the auto industry, allowing other companies to create in-car components that are ready to connect over these networks.

The Alliance's statement said it expects other automakers and auto-industry suppliers to join in the coming months.

As you'd expect, the details around the proposed standards themselves are highly technical. For investors, the key things to note are the companies involved -- and more broadly, the fact that the industrywide push to develop self-driving technology has reached the point where this sort of thing is needed.

Who are these companies?

Volkswagen is the German auto giant, of course. Specifically, it's VW's U.S. arm that signed on to this deal. Bosch and Continental are both big suppliers to VW (and many other automakers).

Chip giant NVIDIA has staked out an early leadership position in the race to build hardware "brains" for self-driving vehicles. Its GPU (graphics processing unit) chips turn out to be especially well-suited for the complex calculations needed in artificial-intelligence applications (of which self-driving is one). NVIDIA has been offering its chips in a series of ready-to-go packages for self-driving test vehicles under the Drive PX name.

The latest version of Drive PX, called Drive PX Pegasus, is effectively an on-board supercomputer packaged to meet auto-industry standards for safety and durability. It's expected to begin shipping in the second half of 2018.

Last but certainly not least, Aquantia is the company that might be key to this new alliance. Aquantia is a Silicon Valley company that specializes in super-fast Ethernet connectivity solutions. It has developed a 10-gigabit-per-second automotive-grade networking solution that it is positioning as ideal for the huge in-car data-shuffling needs of Level 4 and Level 5 autonomous vehicles.

Significantly, NVIDIA integrated Aquantia's high-speed automotive Ethernet into Drive PX Pegasus -- giving both companies an incentive to push it as the industry standard.

What's next for the NAV Alliance

It'll be interesting to see how NVIDIA's chief rival in this space, Intel (NASDAQ:INTC), responds to this development. Intel, via its subsidiary Mobileye, has also staked out a substantial position in the self-driving race. Will it choose to join the NAV Alliance, making Aquantia the de facto in-car networking standard -- or will it push a competing solution?

Of course, Intel's decision might depend on whether other major automakers with advanced self-driving programs, like General Motors (NYSE:GM), choose to join the Alliance. We'll see how this plays out -- but either way, if you're eyeing investment opportunities in and around the race to deploy self-driving vehicles, I think it's worth putting Aquantia on your radar.