The chip giant unveiled the new system, called Drive PX Pegasus, at its GPU Technology Conference in Munich on Tuesday. When it begins shipping next year, the Pegasus will replace NVIDIA's current automotive "brain," the Drive PX 2 AI platform. Drive PX 2 is being used by many of the companies working on autonomous-vehicle systems, including automakers Volkswagen AG (OTC:VWAGY), Mercedes-Benz parent Daimler AG (OTC:DDAI.F), and giant Toyota (NYSE:TM). It's also shipping in several production vehicles that come with advanced driver-assist technology.

Simply put, Pegasus will be a huge upgrade from PX 2. It's capable of handling more than 320 trillion operations per second, making it 10 times more powerful than PX 2. That's enough, NVIDIA said, to power a full-blown "Level 5" self-driving vehicle, one that can operate under any conditions a human driver could.

On a technical level, the Pegasus is powered by four of NVIDIA's artificial-intelligence processors. It combines two Xavier system-on-a-chip processors with two graphical processing units (GPUs), along with hardware created specifically to accelerate deep-learning and machine-vision algorithms, the company said. The whole thing is packaged to meet the strictest auto-industry certifications for safety and durability. Best of all: Pegasus is small (about the size of a large book) -- a big leap from the trunkful of processors used in some self-driving development vehicles now.

NVIDIA pointed out that the computational power required for a fully self-driving vehicle is a huge leap from that offered in even the most advanced production vehicles today. Pegasus is the product it will offer to meet that need.

"Creating a fully self-driving car is one of society's most important endeavors -- and one of the most challenging to deliver," said CEO Jensen Huang in a statement."The breakthrough AI computing performance and efficiency of Pegasus is crucial for the industry to realize this vision."

NVIDIA will begin shipping the Drive PX Pegasus platform to its automotive partners in the second half of 2018.

What it means: The driverless-car supply chain is taking shape

Automakers depend on a long and complex global supply chain to build their vehicles in mass-production quantities. There are companies that specialize in supplying specific automotive components, from seats to engine parts to rearview mirrors. 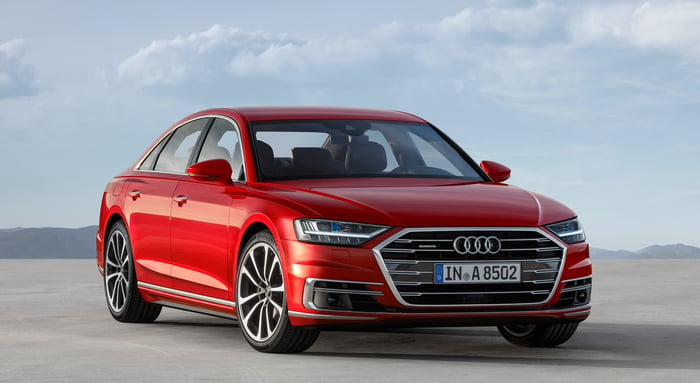 The new Audi A8 has advanced driver-assist systems powered by the NVIDIA Drive PX 2 platform. Audi is a likely early customer for the new Pegasus system. Image source: Audi AG.

Over the last couple of years, NVIDIA has made a strong bid to be the industry's supplier of choice when it comes to the powerful computer processors that will serve as the "brains" of those vehicles. With the Pegasus platform, NVIDIA is announcing that it's ready (or will be in the second half of 2018) to supply anyone wishing to develop and manufacture a Level 5 self-driving vehicle.

It's likely that NVIDIA will have competition, of course. For starters, Intel (NASDAQ:INTC) has signaled that it plans to seriously contest the self-driving space through its newly acquired Mobileye subsidiary, which has already carved out a big niche in the machine-vision portion of the emerging segment.

NVIDIA's deep expertise with GPUs, which are ideally suited for machine-learning applications, is thought to give it a substantial advantage over Intel in this space. But it's possible that Intel could close the gap over the next few years -- it will certainly try.

The upshot: NVIDIA is staking an early claim to a huge potential market

That's a big market, one that's worth fighting over. There's no question that the new Pegasus platform will draw serious interest from automakers and others developing self-driving systems, and will probably capture a big portion of the market (such as it is right now) right out of the gate.

But it seems a safe bet that Intel, and perhaps others, will gear up to mount a serious challenge to NVIDIA and Pegasus -- possibly even before Pegasus begins shipping next year. Stay tuned.