Tuesday was another tough day for the stock market, which chose the last week of a strong month to go through at least a small correction. The Dow Jones Industrials were down as much as 400 points during the session before recovering somewhat, but major benchmarks were generally lower by about 1% as rising bond rates and concerns about the sustainability of the bull market rally started to gain traction. Even though the indexes fell sharply, some stocks managed to buck the trend and post solid gains. Aquantia (NYSE:AQ), Thomson Reuters (NYSE:TRI), and Madrigal Pharmaceuticals (NASDAQ:MDGL) were among the best performers on the day. Below, we'll look more closely at these stocks to tell you why they did so well.

Shares of Aquantia jumped 12% after the company announced that it would enter into a partnership with chip giant NVIDIA (NASDAQ:NVDA) in connection with its autonomous vehicle program. Aquantia specializes in Ethernet connectivity solutions, and it said that NVIDA had chosen Aquantia's 10-gigabit-per-second solution as a key component of the Drive Xavier and Drive Pegasus platforms. Aquantia just went public last fall amid uncertainty about whether it could make enough of a splash in the industry. But the company just put those concerns to rest, and adding artificial intelligence to its list of focus areas could bode even better for the stock in the future. 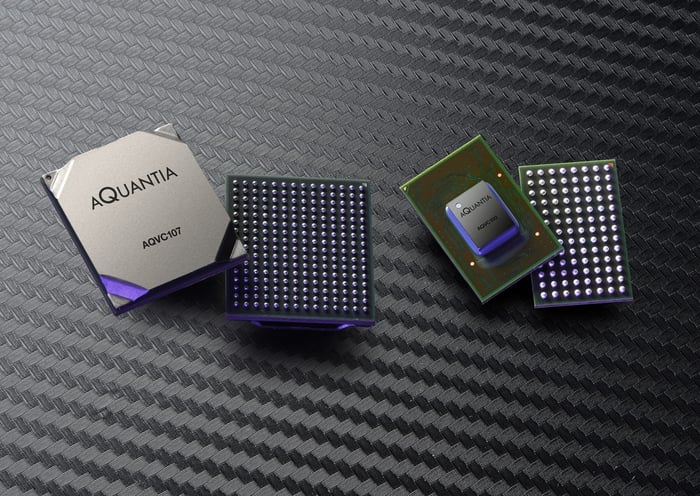 Extra! Read all about Thomson Reuters

Thomson Reuters stock climbed 7% in the wake of an expression of interest in one of its business units from private equity giant Blackstone Group (NYSE:BX). Blackstone reportedly wants to take a roughly 55% position in Thomson Reuters' financial data business, with payment structured as a roughly $325 million annuity for 30 years, adding up to nearly $10 billion. The move would refocus Thomson Reuters on its traditional news business, but it would also leave the company with a 45% stake in the financial data division to sustain some level of diversification.

Finally, shares of Madrigal Pharmaceuticals gained nearly 11%. The biopharmaceutical company said that it would present phase 2 results from its trial involving liver-directed thyroid hormone receptor agonist MGL-3196 at an upcoming conference. The European Association for the Study of the Liver is scheduled to hold its International Liver Congress in mid-April in Paris, and Madrigal intends to discuss further the encouraging results that MGL-3196 had in reducing fat levels. The biopharma has already gotten a nice boost from that news, but investors hope that further discussions could show even more promise for the treatment for nonalcoholic steatohepatitis going forward.