These partnerships are centered on NVIDIA's new DRIVE Xavier autonomous-machine processor, which Huang called "the most complex system on a chip ever created." 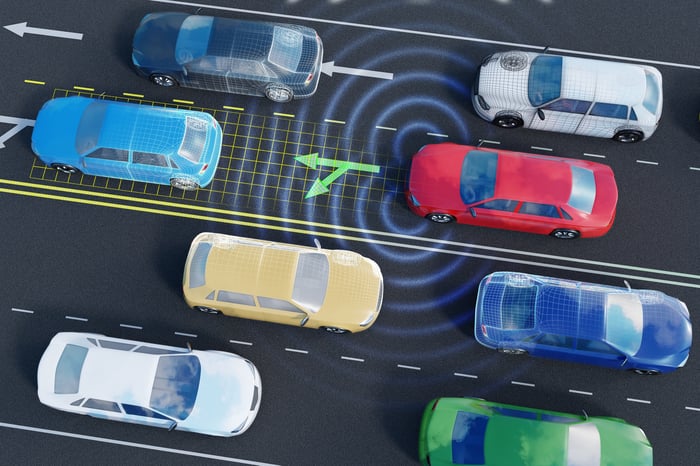 NVIDIA's partnership with Volkswagen involves developing an AI co-pilot for the new VW I.D. Buzz, which is an updated electric version of the automaker's iconic MicroBus. VW will use NVIDIA's new DRIVE IX software development kit to create "intelligent co-pilot" applications that will include convenience and assistance systems based on sensor data that is processed from both inside and outside of the car. DRIVE IX can be used to create such cool AI-enabled applications as gesture recognition for user controls. This teaming has loads of potential for NVIDIA because VW is the world's largest automaker.

The second partnership involves ride-sharing giant Uber using NVIDIA's technology for the AI computing system in its fleet of self-driving cars and freight trucks. This is another major win, as Uber is the biggest ride-sharing service in the United States and one of the largest in the world. Moreover, it provides NVIDIA with additional exposure to the driverless truck space. The third big collaboration is with Chinese tech giant Baidu -- "the Google of China" -- and ZF, one of the world's largest automotive suppliers. The trio is creating the first production-ready AI autonomous vehicle platform for China, based on NVIDIA's DRIVE Xavier, ZF's new ProAI car computer, and Baidu's Apollo Pilot. This teaming provides NVIDIA with an opportunity to profit from what promises to be a massive self-driving vehicle market in the world's largest auto market.

Lastly, NVIDIA is partnering with Silicon Valley-based start-up Aurora Innovation, which recently announced that it's teaming with Volkswagen and Hyundai to build self-driving vehicle platforms. Aurora's pedigree makes it likely to be on the fast track to becoming a major player in driverless vehicles: It was founded and is led by the former leaders of autonomous vehicles at Google and Tesla, Chris Urmson and Sterling Anderson, respectively, and Drew Bagnell, who helped found Uber's autonomous car group in Pittsburgh.

As for NVIDIA's Xavier, Huang said that the processor "can do deep learning, computer vision and high performance computing at highly efficient levels," and will be available to select customers in the first quarter of this year. (Deep learning is a category of AI that involves training a machine to think -- or make inferences from data -- like we humans do. NVIDIA's graphics processing unit (GPU)-based approach to AI is a deep learning tech.) Xavier represents the work of more than 2,000 NVIDIA engineers over a four-year period, and an investment of $2 billion in research and development, noted Huang. 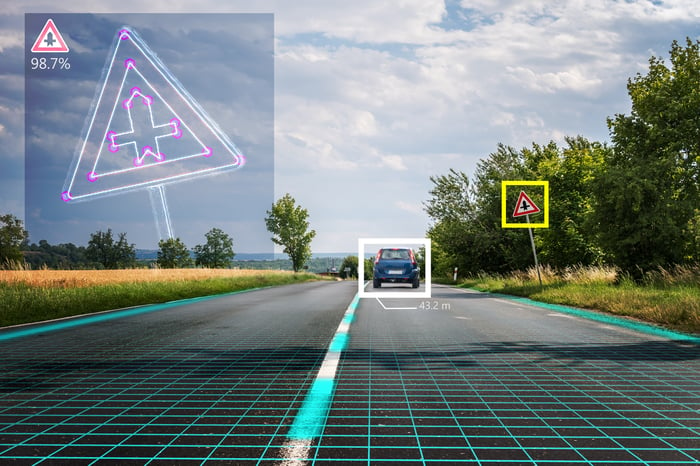 NVIDIA's new partnerships have the potential to power the company ahead -- or further ahead, depending upon your perspective -- of chip behemoth Intel (NASDAQ:INTC) in the race to win the leadership position in supplying the "brains," or AI, to power autonomous vehicles.

Intel is partnering with BMW and Fiat Chrysler in self-driving vehicles. In September, the chipmaker revealed that it's been collaborating with Alphabet's Waymo subsidiary -- formerly known as Google's driverless car project -- on autonomous vehicle tech. This revelation has led some to opine that Intel -- which ratcheted up its driverless vehicle tech capabilities when it acquired computer vision leader Mobileye for $15.3 billion in August -- is leading NVIDIA in this space. Granted, Waymo is the esteemed first-mover in driverless cars -- from a testing standpoint. But I don't agree with this take, as NVIDIA has inked a wide range of partnerships with top companies. This was true before Huang's CES announcement, and is even more true now.

More than 320 car and truck makers and others are developing with NVIDIA's autonomous vehicle AI computing platform, DRIVE PX. This platform is used in all of Tesla's vehicles and in Audi's new 2018 A8. Toyota -- the world's second largest automaker -- and Mercedes-Benz have adopted it for vehicles that are planned for launch within the next several years. (Tesla CEO Elon Musk last month confirmed rumors that the electric vehicle specialist is developing a custom AI chip for autonomous driving, so NVIDIA's Tesla business could potentially end at some point.)

Competition from Intel -- along with others -- promises to heat up and shouldn't be taken lightly, given that the chip behemoth has very deep pockets. However, there's a new factor that has the potential to tip the scales in NVIDIA's favor: quality concerns. Last week, it was revealed that there is a widespread security flaw going back up to two decades affecting many of Intel's central processing units (CPUs) used in consumer electronic devices and servers that make these machines vulnerable to hacking. It's possible that this issue could cause some companies to hesitate to use Intel's chips in their driverless vehicle initiatives.