Graphics and mobile computing specialist NVIDIA Corporation's (NASDAQ:NVDA) core gaming market continues to perform wonderfully, and its emerging markets are growing fast. The company has the potential to hitch a ride on the growth trains of many technologies widely expected to explode in the coming years, from artificial intelligence to virtual reality (VR) to driverless cars.

Reflecting its superb financial results and immense growth opportunities, NVIDIA's stock has returned a whopping 169% over the last year through Monday, Aug. 14, 2017, versus the S&P 500's 15.3% return.

Here are 10 reasons to buy NVIDIA stock and hold on for the long ride:

1. NVIDIA is in the right business

Over the last few decades, technology has become an increasingly large part of our world. Numerous emerging technologies promise to further "tech up" the consumer and industrial spaces. This dynamic has led to increasingly strong sales in the semiconductor industry.

As to NVIDIA's specific business, the company operates in two main segments: graphics processing units (GPUs) and Tegra processors. In fiscal 2017, these businesses accounted for 84.3% and 11.9% of total revenue, respectively. (There's also a small "other" category.)

NVIDIA's flagship GPU segment's main processor product lines include the GeForce for gaming, Quadro for design professionals, and Tesla for cloud computing. End markets for the Tegra business, which produces processors that integrate a computer onto a single chip, are things that are mobile, from consumer gadgets to autos and drones.

NVIDIA gets high marks on leadership. CEO Jensen Huang is a co-founder of the company, so he knows it intimately. He also has a lot of skin in the game: He owned 1,751,179 million NVIDIA shares as of March 15, 2017, valued at $294.9 million based on the closing price Aug. 14, 2017, of $168.40 per share. Huang, who has a master's degree in electrical engineering from Stanford, worked as a microprocessor designer at Advanced Micro Devices, or AMD, before founding NVIDIA in 1993.

As of Aug. 14, 2017, Huang gets a thumbs-up from 97% of the 479 Glassdoor CEO ratings from current or former employees, with the company itself garnering 4.5 stars (out of a total of 5). Huang is 54 years old, so investors probably don't need to be concerned that he'll retire soon. 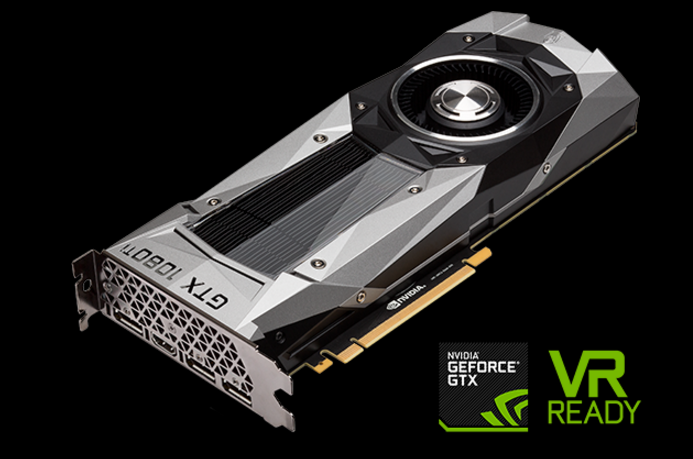 In early March, the first batch of what NVIDIA touts as its most powerful GeForce card ever, the $700 GTX 1080 Ti, sold out in 30 minutes, even with a two-card-per-customer limit. Image source: NVIDIA.

3. It dominates in discrete GPUs

NVIDIA is the dominant player in discrete GPUs, which is its core business. In the first quarter of 2017, NVIDIA held a 72.5% share of the market for discrete GPUs, with competitor AMD holding a 27.5% share, according to industry monitoring and analysis firm Jon Peddie Research.

4. Its financial performance proves it can execute 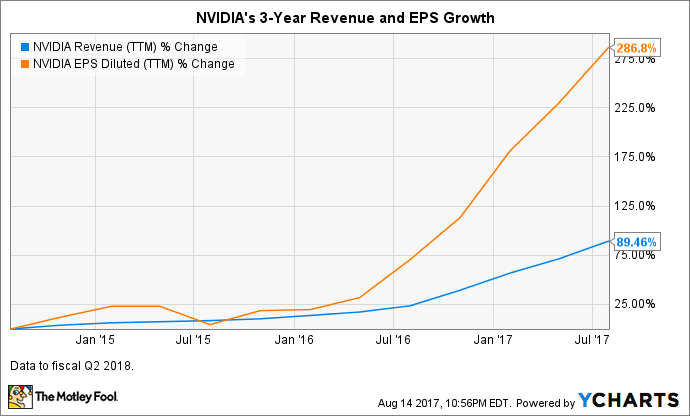 5. It's been whipping Wall Street's estimates

In the last four quarters, through the second quarter of fiscal 2018, NVIDIA has beat Wall Street's EPS estimates by anywhere from 19% to 46%. This supports the belief among some, myself included, that analysts' future estimates will also prove too conservative.

If this premise proves true, the stock's valuation may not be as pricey as it seems at first glance. 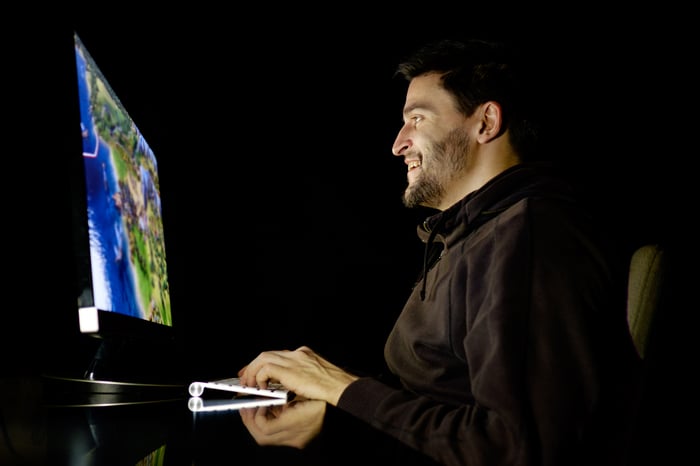 6. It has great performance in its core computer gaming market

The company predicts continued solid growth in its core gaming market due to growth drivers like virtual reality, esports, and the adoption of broadband in emerging markets.

7. & 8. It's had phenomenal growth in data center and auto markets

9. Its commitment to shareholders shines

NVIDIA's commitment to returning value to shareholders is evidenced by its dividend and stock buyback programs. 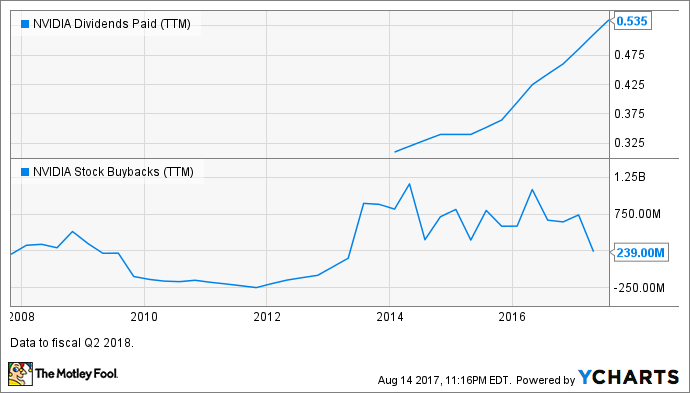 It's quite rare for fast-growing tech companies that have considerable growth opportunities to pay dividends. Granted, NVIDIA's dividend is modest, with a current yield of 0.34%. However, the dividend has increased considerably over the last few years. The fact that NVIDIA pays a dividend at all suggests that management is extremely confident of the company's continued success and resultant strong free cash flow.

10. It has explosive growth opportunities

Laying out NVIDIA's current market sizes with the company's estimated total addressable market (TAM) sizes -- the annual revenue opportunity available for it to capture -- we can clearly see its phenomenal growth opportunities:

NVIDIA's customer and partner list reads like a Who's Who of the corporate world. Here's just one example of its growth opportunities: Tesla Motors has long used NVIDIA's Tegra processors to power its vehicles' standout infotainment systems and instrument clusters. In October, Tesla began using NVIDIA's DRIVE PX 2 AI-computing platform to power its Autopilot on all new Model S and Model X vehicles. The more affordable Model 3, which started shipping in July, is similarly equipped.

This isn't to say NVIDIA's road to growth in its various markets will be speed-bump-free. Tesla, for instance, had been working with Israeli company Mobileye on its Autopilot efforts before the companies' ugly public parting. In mid-March, chip giant Intel announced a $15.3 billion deal to buy Mobileye, so NVIDIA is in for some stiffer competition in the emerging driverless car market.

Huang's statement in NVIDIA's fiscal Q4 and full-year 2017 earnings release provides a great summary of what I believe to be the primary bull case for NVIDIA stock:

Our GPU computing platform is enjoying rapid adoption in artificial intelligence, cloud computing, gaming, and autonomous vehicles.‎ Deep learning on NVIDIA GPUs, a breakthrough approach to AI, is helping to tackle challenges such as self-driving cars, early cancer detection and weather prediction. We can now see that ‎GPU-based deep learning will revolutionize major industries, from consumer internet and transportation to healthcare and manufacturing.