Autonomous trucks are coming -- and the graphics-chip specialist just made another move to position itself to profit.

NVIDIA (NVDA 0.15%) said last week that it participated in a more than $20 million funding round into TuSimple, a Chinese start-up that's developing self-driving technology for long-haul trucks.

The graphics-chip specialist is well known for its self-driving car initiatives and partnerships with automakers Tesla, Toyota, Daimler's Mercedes-Benz, Volkswagen's Audi, Volvo, and others. However, it seems to fly under many investors' radars that the artificial intelligence player is plunking down its chips (literally and figuratively) on the driverless trucking space, too. 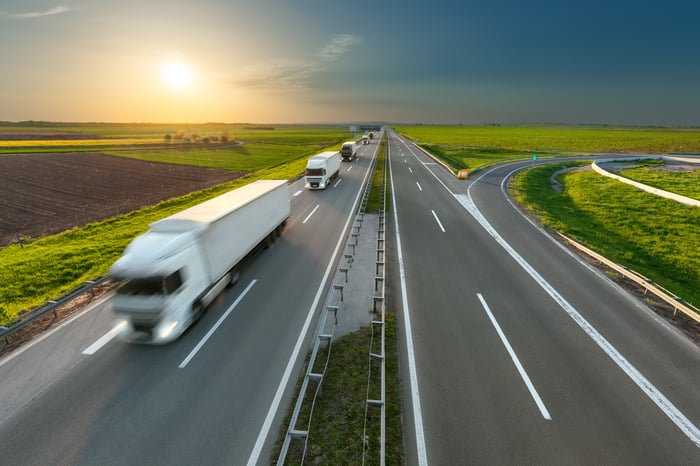 TuSimple, which was founded in 2015, uses its expertise in computer vision and artificial intelligence (AI) to develop autonomous driving systems for trucks. The company's self-driving tech uses eight cameras, three millimeter-wave radar units, computer vision algorithms, and high-definition (HD) mapping. It incorporates several of NVIDIA's technologies, including its graphics processing units (GPUs) and DRIVE PX 2 AI platform, a supercomputer for making sense out of the gads of data taken in by the various sensors about the surroundings of a semi-autonomous or fully autonomous vehicle.

TuSimple claims its "platform's camera and millimeter-​wave radar array allows for sensing distances of up to 200 meters from the vehicle, compared to the standard 80 meters using Lidar arrays." Sensors on autonomous trucks must be more powerful than those on cars because trucks have longer stopping times.

The company has more than 100 employees at its two locations in Beijing and San Diego. Its business model is similar to that of United States-based autonomous truck company Otto, which was acquired by Uber last year: It mostly teams with transportation companies to customize autonomous driving algorithms and solutions.

In June, TuSimple successfully completed a 200-mile Level 4 test drive from San Diego to Yuma, Arizona, using cameras as the primary sensor. Level 4 refers to the five-level classification for autonomous vehicle systems that the National Highway Traffic Safety Administration (NHTSA) has adopted. Level 4 vehicles are fully autonomous, but only within their "operational design domain" -- in this case, on highways -- not in every driving scenario. 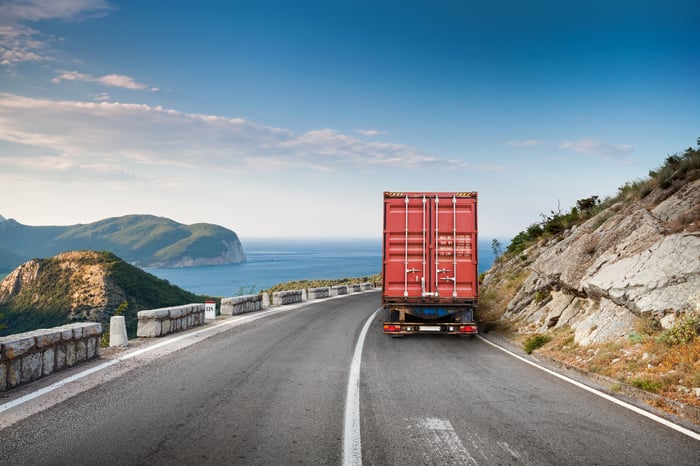 The potential market size for self-driving trucks is humongous: There are about 300 million trucks worldwide, driving more than 1.2 trillion miles annually. In the U.S. in 2016, there were 33.8 million trucks registered for business purposes, including 3.68 million heavy-duty Class 8 trucks. Trucking is the lifeblood of the U.S. economy: Last year, trucks moved nearly 71% of all domestic freight tonnage, generating revenue of $676.2 billion, according to the American Trucking Associations.

Transportation companies and other businesses with large delivery trucks are likely to embrace autonomous trucks, as there is a major shortage of truck drivers in both the U.S. and Europe. Moreover, self-driving trucks should help a company's bottom line, as they promise to be cost-effective in the not-too-distant future. Trucking companies will essentially be forced, in my opinion, to adopt the technology in order to stay competitive with their peers that embrace the tech.

NVIDIA has been positioning itself to profit from this budding market. In January, leading auto and truck parts supplier ZF and NVIDIA announced the launch of ZF ProAI self-driving systems, based on NVIDIA's DRIVE PX 2 AI platform, for cars, trucks, and other commercial vehicles. In March, the company announced that it's working with global truck maker PACCAR -- which manufactures the Kenworth, Peterbilt, and DAF truck brands -- on developing automated driving systems for trucks.

Other truck manufacturers working in the driverless truck space include Daimler and Volvo. Moreover, an exciting new entrant is on the horizon: Tesla. CEO Elon Musk said in April that the company plans to unveil an electric semi truck in September. The truck is slated to have some autonomous driving features. Daimler, Volvo, and Tesla are all partnering with NVIDIA on self-driving cars, so it seems likely NVIDIA will be part of their self-driving truck initiatives, too.

In its most recently reported quarter, NVIDIA's auto platform's revenue grew 19% year over year to $142 million, accounting for 6.4% of its total revenue of $2.23 billion. This platform appears poised for robust growth, thanks to the strong position the company is carving out in the burgeoning autonomous car and truck markets.