Dividend investors are always on the hunt for companies that offer generous yields. But income investors know that in order to find great stocks, they need to also pick companies with the financial stability to continue paying dividends for decades to come.

To help you track down some of the best dividend stocks that should pay you for the rest of your life, we asked three Motley Fool investors for some of their best suggestions. They came back with Hormel Foods Corp. (NYSE:HRL), Intel (NASDAQ:INTC), and Apple (NASDAQ:AAPL). Read on to find out why. 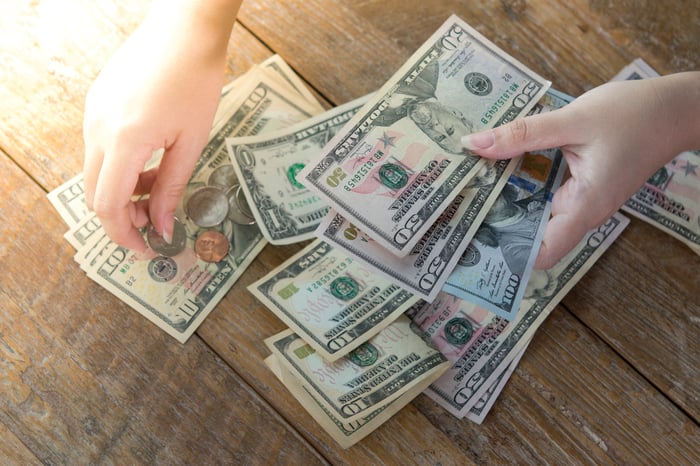 Reuben Gregg Brewer (Hormel Foods Corporation): Hormel's roughly 2% yield may not impress you, since you can get a similar yield via an S&P 500 index fund. However, the protein-focused food maker's 52 annual dividend increases is a record that few can match. And the dividend has grown at a compound annual rate of 16% over the past decade. (That's more than five times faster than the historical growth rate of inflation.) Put simply, Hormel has made sure to pay investors well in good years and bad.

What's interesting is that Hormel is working through a rough patch right now, as customer tastes shift toward fresher and healthier fare. Organic sales were only up 1% in the most recent quarter and, perhaps justifiably, the stock is 17% off its early 2016 highs. But that drop has pushed the dividend yield toward the high end of the company's historical range. A 2% yield isn't large on an absolute basis, but the level relative to the company's own history suggests a buying opportunity. 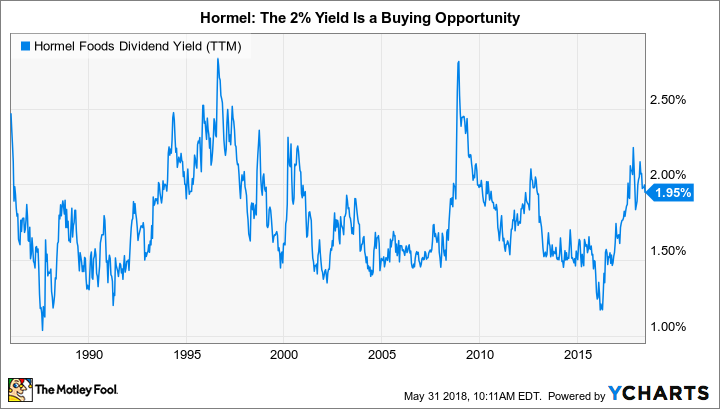 Hormel, meanwhile, isn't sitting still waiting for customers to come back, it's adjusting with the times. That includes selling noncore assets like Diamond Salt and buying brands that resonate with customers, like Wholly Guacamole (singled out for strong quarterly growth). More recently, Hormel has been building its offering in the deli space, an area of the grocery store that's growing four times faster than the grocery store as a whole.

To be honest, Hormel isn't an exciting company. However, it has a long history of shifting with the times and paying investors well along the way. I doubt it plans to stop doing that anytime soon.

Ashraf Eassa (Intel): Although chip giant Intel currently faces its share of challenges, ranging from manufacturing technology readiness issues as well as uncertainty around who will be its next leader (its CEO resigned on June 21 ), it's still extremely profitable and pays a solid dividend.

If Intel's profitability does start to erode in the coming years as it begins to face significant business challenges, its current quarterly dividend of $0.30 per share ($1.20 on an annualized basis) will probably be sustainable as it represents just a fraction of the non-GAAP earnings per share of $4 that analysts expect the company to generate this year.

Even if things get really bad for Intel for a while, it should be able to continue to pay out its current dividend for the foreseeable future.

Moreover, looking out into the future, the demand for computing power in the data center isn't showing signs of slowing down, and Intel is working aggressively to expand into new markets such as self-driving cars and data center memory technologies. These efforts could eventually be significant positive contributors to the company's business results.

Of course, the size of its dividend will almost certainly correlate with the company's financial performance (CFO Bob Swan said back in early 2017 that Intel aims to grow its dividend in line with non-GAAP earnings per share), but I don't think investors have to worry too much about the dividend getting cut to zero in the foreseeable future.

If it's good enough for Warren Buffett...

Chris Neiger (Apple): Warren Buffett, the famed billionaire investor and advocate of buy-and-hold investing, has made several large purchases of Apple stock through his Berkshire Hathaway company. That should make investors with a bent toward holding stocks for the long term sit up and take notice.

Getting Buffett's stamp of approval is just one indicator that Apple's stock could continue to be a great investment over the long term, but there are plenty more. First, Apple recently proved its commitment to its shareholders when it announced a massive $100 billion stock repurchase program that begins in the current quarter. This repurchase comes after the company just finished up $210 billion worth of buybacks over the past couple of years.

Dividend investors will also be pleased to know that the company increased its dividend by 16% in the most recent quarter, to $0.73. Apple has boosted its dividend for five consecutive years now, and its forward yield sits at about 1.55%. Of course, there's no need to worry about Apple's ability to keep the payments coming, either. Its payout ratio (the percentage of its earnings that are used for dividends) is just under 25%.

Yes, you can get a much higher yield elsewhere, but Apple offers a compelling mixture of stability, strong management, and a knack for finding new ways to grow its businesses. While Apple still makes the vast majority of its top line from its iPhone sales, the company has also been busy building out its services segment. In the most recent quarter, Apple's services sales (including its Apple Music, Apple Pay, and App Store) grew by 31% and brought $9.2 billion in revenue. With that growth, the services segment now accounts for 15% of the company's total sales.

Some investors may believe that Apple's best days are behind it, but the growth in its services division proves that this company still knows how to find new ways to make money -- even if it's not from a flashy new device. Investors should also remember that Apple is still the leading smartphone maker by profits and that it's the dominant company in the burgeoning wearable tech segment. When you add all of that to its recent commitment to share buybacks, it's easy to see that this tech behemoth is more than worthy of finding its way into anyone's list for dividend stocks to hold for years to come.