Despite ongoing investor concerns regarding iPhone X demand, Apple (NASDAQ:AAPL) just enjoyed a stellar quarter thanks in large part to the new flagship device. Meanwhile, the company keeps making steady progress with its services business, marching toward its goal of doubling revenue by fiscal 2020 relative to fiscal 2016 levels. Greater China continues its strong rebound, too.

There was a lot to like about Apple's fiscal second-quarter results, which set several new records for the March quarter.

Total revenue came in at $61.1 billion, close to the midpoint of the company's guidance issued in February. That translated into net income of $13.8 billion, or $2.73 per share.

Apple sold 52.2 million iPhones, a modest 3% increase in unit sales. But thanks to iPhone X's $999 starting price, iPhone revenue jumped 14% to $38 billion. iPhone average selling prices (ASPs) were $728, down from the prior quarter but a notable increase from a year ago ($655). iPhone X remains the most popular model, which CEO Tim Cook noted was the first time that the most expensive model has also been the most popular.

Services revenue skyrocketed 31% to $9.2 billion -- an all-time record -- which makes it a $33.4 billion business on a trailing-12-month basis. That's nearly three times the size of Netflix's top line and approaching Facebook's ad business for Apple's services segment alone. All of the services within that segment are performing well, with Apple Music recently hitting 40 million paid subscribers and iCloud storage revenue up over 50%. There are now 270 million paid subscriptions running through Apple's digital platforms, adding more than 100 million over the past year. 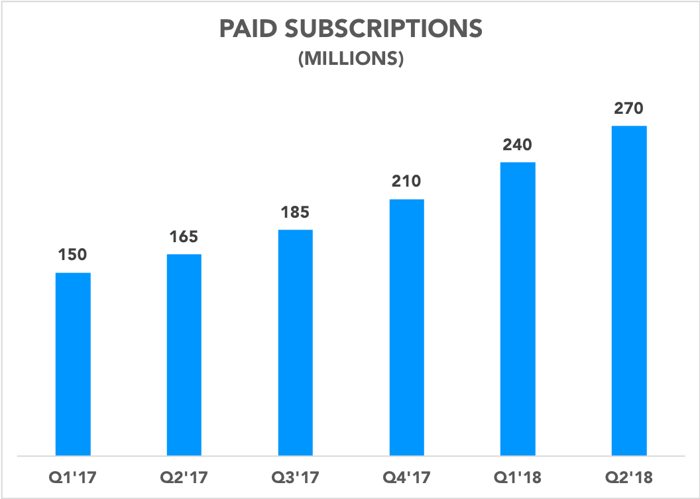 The wearables business -- which includes Apple Watch, wireless Beats, and AirPods -- is now the size of a Fortune 300 company. That's Apple's preferred (and roundabout) way of saying its wearables segment has now brought in at least $9.3 billion in sales over the past year. Two quarters ago, this business was the size of a Fortune 400 company (at least $6.7 billion in revenue).

With the headline metrics out of the way, the real story was buybacks. Following tax reform, investors knew to expect significant activity in this department, and Apple did not disappoint. The company repurchased a mind-boggling $23.5 billion in stock last quarter, all in open market purchases. Apple also completed an accelerated share repurchase (ASR) program during the quarter. Here's how last quarter compares: 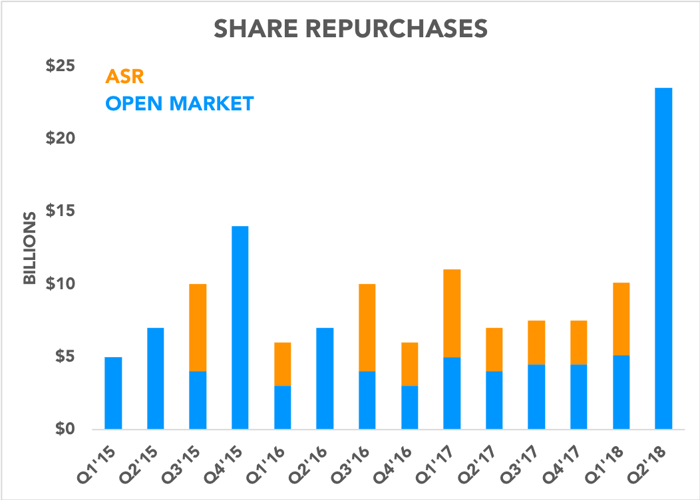 That leaves just over $10 billion remaining of the $210 billion repurchase authorization, which means it's time for a new program. The board has authorized a massive new $100 billion repurchase program. Apple intends to finish out the last program and start on the new authorization in the June quarter. Management continues to believe that Apple shares are undervalued; Maestri admits that "we have a bias toward the buyback." Yeah, we can tell.

What's less clear is exactly how much Apple actually repatriated thus far. CFO Luca Maestri neglected to mention how much cash remains overseas, but this figure will be disclosed in the forthcoming 10-Q. Apple wants to work toward a "more optical capital structure" now that it has much more flexibility regarding its cash position, and Maestri reaffirmed Apple's goal of getting to "net cash neutral" in the long term. Apple's net cash position is currently $145 billion, comprised of $267 billion in gross cash and $122 billion in debt.

Apple is guiding for revenue in the fiscal third quarter to be $51.5 billion to $53.5 billion. Gross margin is forecast to be about flat sequentially, in the range of 38% to 38.5% (gross margin was 38.3% in the March quarter). Operating expenses should be $7.7 billion to $7.8 billion, while other income and expense is expected to be $400 million. The tax rate next quarter should be about 14.5%.

Overall, it was a solid quarter. Apple is executing across all aspects of its business. And as if the company's stock buybacks weren't already aggressive enough, there's plenty more where that came from.