The only official metric that Apple (AAPL 0.96%) disclosed about Apple Watch during last quarter's earnings release was that the smartwatch enjoyed "unit growth of over 50% for the third consecutive quarter." Lacking a base figure for that growth, investors remain largely in the dark regarding Watch sales and have to rely on third-party estimates.

Market researcher Canalys has put out its most recent estimates for the wearable band market, and says that Apple Watch Series 3 helped the company regain the No. 1 spot in the third quarter. Apple shipped 3.9 million Apple Watches last quarter, according to Canalys. 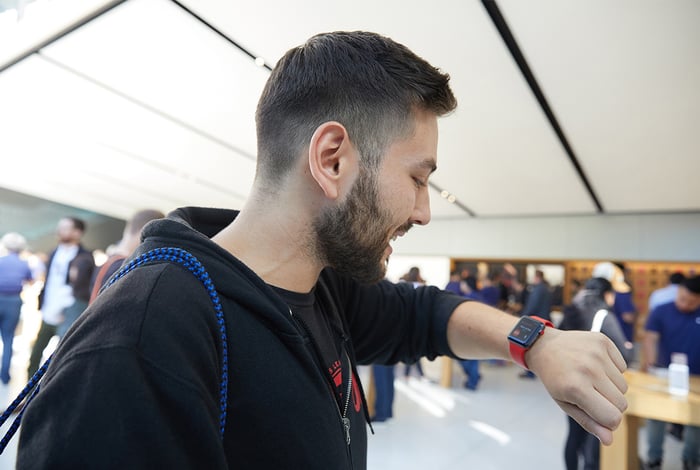 China's Xiaomi, which was the No. 1 vendor in the second quarter, fell to the No. 2 spot with 3.6 million units, while Fitbit (FIT) came in at No. 3 with 3.5 million units shipped. The overall market contracted modestly, falling 2% to 17.3 million units as consumer preferences continue to shift away from basic trackers and toward full-featured devices like smartwatches. That trend has been unfolding for a while now, but accelerated this year, as seen in Fitbit's unit volumes.

Canalys analyst Jason Low notes that cellular connectivity appears to be driving demand, which is mitigating concerns at wireless carriers that consumers aren't interested in cellular smartwatches (a concern that I shared previously). The researcher estimates that approximately 800,000 Apple Watches shipped during the quarter -- about a fifth -- included cellular connectivity. Domestic carriers are charging $10 per month to add a data plan for Apple Watch, which could be rather profitable, as actual data usage will probably be quite low. Nobody's streaming video to such a small screen.

The device suffered from some modest supply constraints in several important markets like China, as Series 3 launched with just days left in the third quarter alongside the iPhone 8 and 8 Plus.

More broadly, Apple says its total wearables business grew 75% last quarter as well as throughout fiscal 2017, and is now the size of a Fortune 400 company. No. 400 on the Fortune 500 for 2017 was Calpine, with $6.7 billion in revenue, so we can say Apple's wearables business is at least that large and represents over half of the company's "Other Products" segment, which generated $12.9 billion in revenue in fiscal 2017.

The Mac maker uses a unique definition for wearables and includes wireless headphones like AirPods and BeatsX as well as Apple Watch. In contrast, market researchers like IDC do not include wireless headphones in the wearables category unless they include other additional features, such as health/fitness tracking, integrated artificial intelligence (AI) that isn't just coming through a paired smartphone, augmented audio, or real-time translation.

With an augmented reality (AR) headset in the works that would inevitably be considered a wearable as well, it could be just a matter of time before Apple officially breaks out wearables into a distinct reportable product segment.