Apple (NASDAQ:AAPL) may have just figured out the key to unlocking iPad unit sales, but the Mac maker is still trying to discover what will finally spur mainstream adoption for Apple Watch. It should be clear by now that a heavy emphasis on fitness and health is not sufficient (although that won't stop Fitbit from trying), mostly because average consumers are ultimately lazier than they'd like to be.

Will cellular connectivity do the trick? 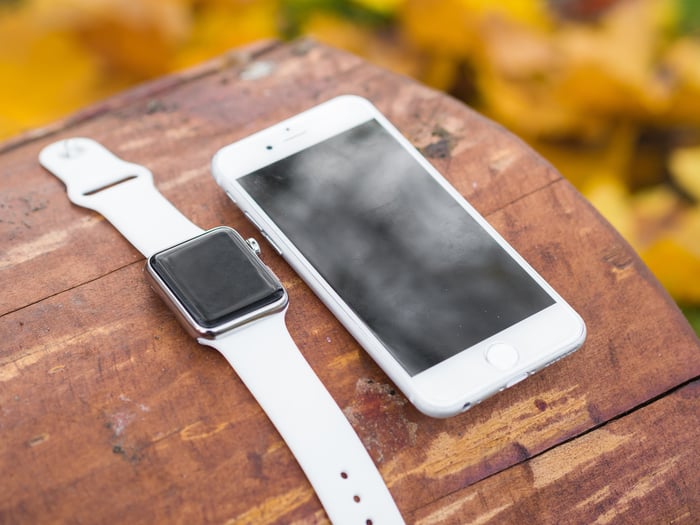 Bloomberg reports that the forthcoming version of Apple Watch -- Series 3 -- is expected to include LTE connectivity. That should free the device from relying on an iPhone for full functionality, including downloading content and software updates, among others. Considering Apple's ongoing legal battle with Qualcomm, it should come as no surprise that Intel will reportedly be supplying the baseband modems that will enable connectivity.

Apple had initially planned on including LTE connectivity in Apple Watch Series 2, but delayed those plans. The company added stand-alone GPS functionality in Series 2, evidence that Apple does want Apple Watch to become an independent device over time, even as cross-platform support is unlikely.

There are two primary concerns that could undermine an LTE-equipped Apple Watch.

First, battery life is already barely sufficient in current iterations, and baseband modems consume quite a bit of energy. Concerns around battery life were reportedly why Apple chose to wait on including LTE in Series 2. The current lineup typically requires daily charging, and is already borderline insufficient for most average consumers that aren't behaviorally accustomed to charging a timepiece every night. Hopefully, Apple's engineering team has made some progress on this front.

Second, and perhaps more importantly, it's unclear what LTE connectivity would cost. That includes the possibility of an upfront premium in the price of the device (Apple charges a $130 premium for cellular connectivity in iPads) as well as a possible data plan through wireless carriers. All four of the major U.S. carriers intend on carrying the new version, according to the report. It's unclear how much cellular data such a device would actually consume under real-world conditions, raising the question of how much consumers would be willing to pay for yet another data plan.

The most viable approach would likely be shared data plans, which most carriers (other than T-Mobile) have been shifting to in recent years. Under such plans, devices like tablets and wearables often have lower fees to access the shared bucket of data compared to smartphones.

It hasn't worked yet

Perhaps ironically, the whole reason why many carriers already have pricing tiers for wearables on shared data plans is because other companies have already tried offering cellular connectivity on smartwatches, such as the Samsung Gear S3 or the LG Watch Urbane 2nd Edition.

Adding LTE is a natural progression, but is unlikely to be the silver bullet that Apple is looking for. It will help as costs come down over time, but LTE connectivity still won't be the killer feature that catalyzes mainstream adoption.