Fitbit (NYSE:FIT) reported second-quarter earnings on Tuesday, and investors cheered the results, sending shares up 15%. The company isn't quite out of the woods yet, but it's making some undeniable signs of progress in its turnaround.

In case it wasn't clear by now, Fitbit desperately needs its forthcoming smartwatch to be a hit. Device unit sales fell 40% year over year to 3.4 million, which led to a painful 40% drop in total revenue to $353.3 million. Fitbit's core U.S. market was hit particularly hard, with revenue falling 55% to $199 million. That top line came in better than expected, which encouraged investors, but perhaps more meaningfully Fitbit confirmed that its smartwatch is "on track for delivery ahead of the holiday season and will drive a strong second half of the year." This all comes amid reports earlier this year that Fitbit has been struggling with smartwatch development. Investors appear optimistic that those challenges are now in the rearview mirror. 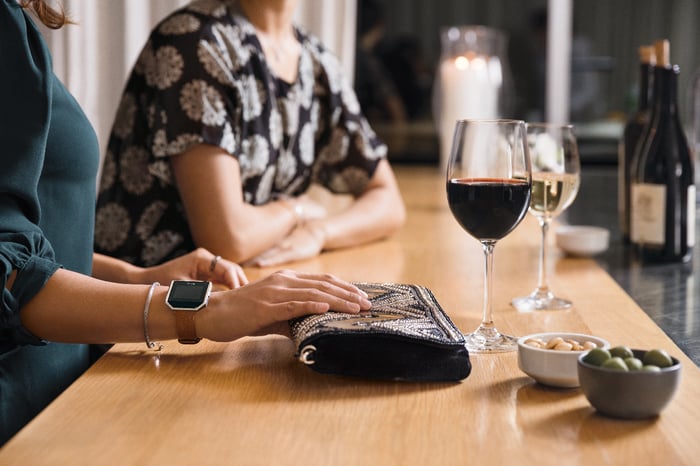 Blaze is the closest thing to a smartwatch that Fitbit currently offers. Image source: Fitbit.

On the earnings call, CEO James Park discussed the company's upcoming device. Following Fitbit's overall emphasis on fitness, its smartwatch will primarily be geared toward helping users improve their health:

And it is no surprise that health and fitness has emerged as a killer application for smartwatches. This plays directly to our strengths. Health and fitness is what we stand for and is in our core DNA.

I have great confidence in our ability to understand consumer needs and deliver health and fitness experiences that consumers love and believe that when we do enter the $10-billion-plus smartwatch market this holiday season, we can successfully drive incremental growth.

Our upcoming smartwatch device will deliver a combination of features that consumers have not yet seen in a smartwatch, including a health- and fitness-first focus, cross-platform compatibility, water resistance to 50 meters, industry-leading GPS tracking, and an easy-to-use software developer kit that will enable innovation and deeper connections to the healthcare system.

CFO Bill Zerella said that sales and marketing expenses are expected to rise in the second half as Fitbit prepares to launch the smartwatch, and Fitbit will be investing in inventory to ship into distribution channels. When asked if third-quarter guidance included any smartwatch shipments, Zerella said "the vast majority of our revenue in Q3" would be from legacy products, suggesting that a Q3 launch is possible, but likely at the end of the quarter (if at all). Management didn't disclose much about pricing other than to say it will be priced above Fitbit's current products.

Apple already offers most of that

Some of Park's comments are peculiar, since nearly all of the proposed features are already a big part of the smartwatch market. A focus on fitness, water resistance to 50 meters, GPS tracking, third-party developer kits, and integrations across other health platforms are all hallmarks of Apple Watch. Apple Watch lacks cross-platform compatibility, but that's hardly a killer feature.

More to the point, none of that has been good enough to really catalyze mainstream consumer adoption of smartwatches, and Apple is a much larger and more capable company than Fitbit (Apple's net income last quarter was over six times Fitbit's current market cap). The Mac maker vaguely noted that Apple Watch sales were up 50% last quarter, but investors have no context for that since the company has never disclosed unit sales.

It's true that Fitbit's goal should not be beating Apple, but rather to supplement it in expanding the market and offering smartwatch consumers more choices. Fitbit also doesn't really have much of a choice. Facing declining sales of single-purpose fitness trackers, it has to do something, and moving upmarket into smartwatches is the only logical path. But judging by how many other companies are abandoning the smartwatch market right now, Fitbit's odds of success don't look very good.