Shares of Fitbit (NYSE:FIT) soared on Thursday following the release of the fitness wearables company's better-than-expected second-quarter report. Despite steep year-over-year revenue and earnings declines, Fitbit beat analyst estimates and reassured investors that its much-anticipated smartwatch was set to launch before the end of the year. As of 12:00 p.m. EDT, the stock was up 14.8%.

Fitbit reported second-quarter revenue of $353.3 million, down 39.8% year over year but nearly $12 million higher than the average analyst estimate. Fitbit sold 3.4 million devices during the quarter, down from 5.7 million during the prior-year period, but up 14% compared to the first quarter. 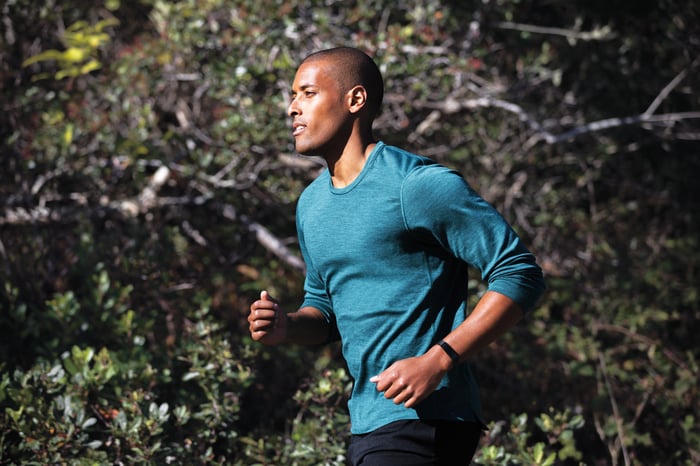 Average selling price improved 4% sequentially and 2% year over year, rising to $100.76 per device. Accessory sales added another $3.98 of revenue per device. The U.S. was the weakest market, with sales slumping 55% to $199 million. The company fared better in other regions: Europe, the Middle East, and Africa revenue jumped 9% to $109 million, and Asia-Pacific revenue soared 46% to $21 million.

Non-GAAP EPS came in at a loss of $0.08, down from a gain of $0.12 during the prior-year period but $0.07 better than analysts were expecting. Non-GAAP gross margin improved by 1 percentage point, driven by an improved product mix, an increase in average selling price, and lower warranty expense.

Fitbit CEO James Park commented: "Consumer demand in the second quarter was better than anticipated, enabling Fitbit to reduce channel inventory and generate better sales. We are executing according to our transition plan and have increased confidence in achieving our full year results."

Fitbit expects a stronger second half, driven by the launch of its upcoming smartwatch. Park said that the new product is on track to launch before the holiday season, despite reported development and software issues. A successful launch could prove to investors that the company's turnaround is for real, but a failure would create a roadblock that the company may not be able to overcome.