A period of transition at Honeywell International (NASDAQ:HON) that has included a CEO change, pressure from activists, and more recently, a series of spinoffs is nearing completion, with the company set to enter 2019 leaner and more focused.

The new Honeywell hopes to combine its industrial expertise with new technologies. CEO Darius Adamczyk, who took over for Dave Cote in April 2017, wants the company to develop emerging areas such as additive manufacturing, 3D printing, and warehouse automation to capture more business from its roster of industrial customers. 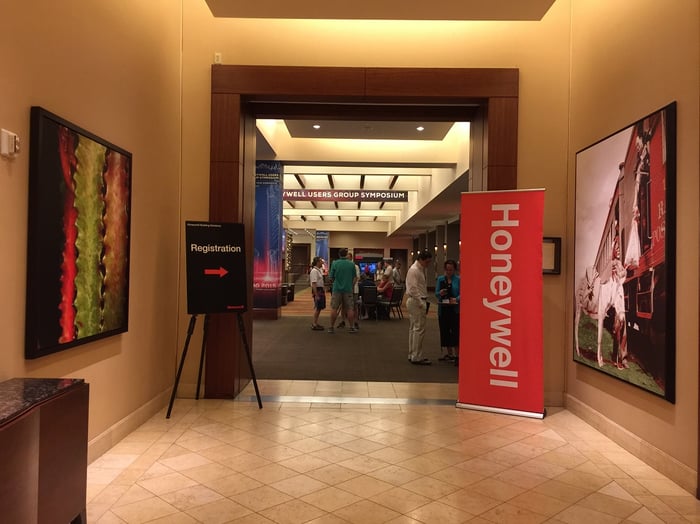 Investors have bought in, with shares of Honeywell up 18.59% over the past 12 months compared to a 16.27% gain for the S&P 500. But is there still room for further price appreciation? Here's a look at where Honeywell stands to try to determine if the company is a buy.

Honeywell resisted activist calls for an outright breakup but is in the process of spinning off its auto-turbocharger business Garrett Motion and its Resideo Technologies home-products business. Those spinoffs are nearing completion, with Garrett having hit the market Oct. 1 and Resideo to follow before year-end, allowing the company to shed two lower-growth units and redeploy capital in other directions.

Adjusted EBITDA margins at Garrett and Resideo, at 19% and 13%, respectively, trail Honeywell's 20.8% overall margin, meaning profitability should improve once those divisions are no longer included.

The spinoffs also will give Honeywell more flexibility to seek out deals in areas including aerospace and industrial automation, where it sees opportunities for extended growth. Honeywell generated free cash flow of $1.662 billion in the second quarter, up 42% from the year prior, giving it ample firepower to continue to do deals like its recently announced 425 million euro purchase of German warehouse-automation company Transnorm.

The two spinoffs comprise about 15% of total Honeywell 2017 EBITDA and about $7.6 billion in annual revenue. Honeywell will backfill some of what is lost, with the two new companies agreeing to pay up to $315 million annually toward asbestos and other legacy liabilities. There's also $3 billion in one-time dividends to the former parent that will be used for buybacks and to pay down debt and reduce interest expense. But investors should be aware that results could be choppy for a few quarters as the separated businesses come off the books.

The criticism of Honeywell going into 2018 was a lack of top-line growth despite strong operating environments in key end markets, including aerospace and construction. Honeywell so far this year has eased some of those concerns, with the company recording 6% organic sales growth and modest margin expansion in the second quarter. Earnings were up 18% year over year in the quarter, and as mentioned above, free cash flow is improving.

Honeywell's plan is to focus on manufacturing specialty components in which it either has proprietary technology or some other competitive advantage for markets like aerospace, where customers tend to weigh quality along with price instead of simply focusing on getting the cheapest option available. The company also is trying to fold in automation and industrial software that tends to come with higher margins -- for example, distribution and smart-conveyor technology from Honeywell-owned Intelligrated (bought in 2016 for $1.5 billion) that's deployed by Amazon and other large shippers.

Trading at more than three times sales and 20 times forward earnings, Honeywell shares are not cheap. But the company's financials suggest it can continue the upswing, with 11% long-cycle order growth and 14% backlog growth in the second quarter. The long-cycle businesses account for nearly half of the Honeywell portfolio, providing some level of visibility into what is looking like continued strong performance into 2019.

In April, Honeywell CEO Adamczyk called the company's shares a "steal" at $165, just about its current price, and the company's results and clarity about its future have only improved in the months since.

The company today increasingly reminds me of what investors thought they were getting in General Electric in the 1990s -- an industrial heavyweight with exposure to a number of important end markets and a grasp on the technology and software that figures to disrupt those markets in the decades to come. Of course, GE's predicament of late is a reminder that no investment is a sure thing, but Honeywell doesn't have the debt load or business concentration that has caused GE's woes.

Honeywell coming out of these splits is an intriguing mix of complex manufacturing know-how and high-tech automation tools and software capable of delivering revenue and margin expansion into the foreseeable future. It might take some time to play out, but my bet is that the newly streamlined company will succeed in generating higher growth and deploy its capital to expand its tech know-how.

Honeywell is one of the more attractive large industrials to buy today.