Another strong set of earnings from Honeywell International moved CEO Darius Adamczyk to describe the company's stock as a "steal" at $165 and an "absolute no-brainer" in the low $140s. I agree with him, and the recent earnings report supported the idea that Honeywell is a good value at its current price. Here's why. 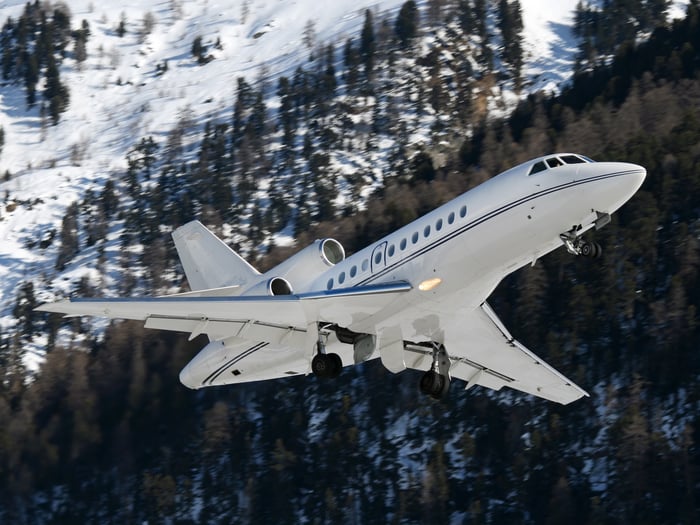 Why Honeywell International stock is a good value

The key argument is that Honeywell's valuation, which is based on free cash flow (FCF), makes it a good value on both an absolute and a relative basis -- and, notably, compared to peers like General Electric Company. Its FCF is being driven by a better earnings outlook: Recent earnings came in ahead of expectations, and management raised full-year guidance on strong aerospace trends.

Honeywell's hike in guidance was driven by an improving end market in original equipment for commercial aviation. Management now sees full-year aerospace segment organic sales up 3% to 5%, compared to previous guidance of 1% to 3% -- notably in business jets and defense. Moreover, there could be more to come if rising energy prices spur investment in helicopters for use in exploration and development.

In addition, a lot of Honeywell's growth in the coming years will come from its self-help initiatives emanating from previous investments. This fact gives confidence that the company will hit its earnings expectations.

Discussing FCF generation at megacap industrials is very much in vogue, not least because of the difficulties GE has had in the last year. GE's first-quarter earnings saw the company guiding toward the low end of full-year earnings guidance, and it's fair to assume the company will track toward the low end of its full-year adjusted industrial FCF guidance range of $6 billion to $7 billion.

It's a completely different story at Honeywell. As you can see below, the company raised full-year guidance across the board, and raised the low end of its FCF range by $100 million:

What the FCF guidance means to investors

The new FCF guidance range of $5.3 billion to $5.9 billion implies growth of 7% to 20% for 2017, but there's reason to believe the figure could come in above the high end of the range. For example, speaking on the earnings call, CFO Tom Szlosek said Honeywell would "continue to target free cash flow growth of more than 20%, driven by higher net income, lower capex [capital expenditures], and better working capital performance in all of our businesses."

Vertical Research Partners analyst Jeffrey Sprague picked up the point on the earnings conference call, asking what the company needed to do to get to the upper end of the range. Szlosek replied: "I think we are on that trajectory that you referred to."

By way of comparison, I've tabulated Honeywell against GE below. While the FCF yield (FCF/market cap) ranges look similar, recall that Honeywell is trending for the high end while GE looks set for the low end of its range (those numbers are in bold so you can see them more clearly).

Moreover, as previously noted, Honeywell is coming out of a period of heavy capital investment, so FCF conversion from net income was lower than the 100% that Adamczyk is aiming for in the coming years. 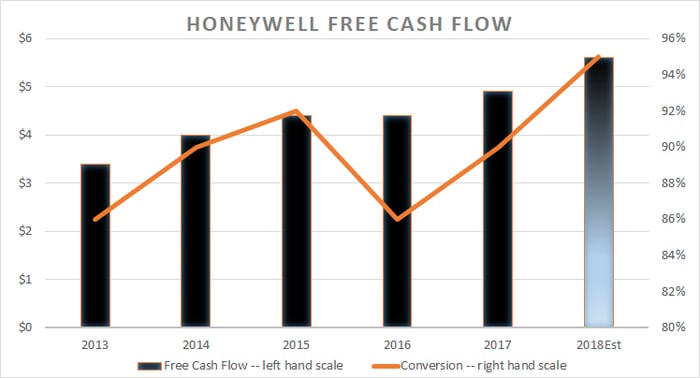 Data source: Honeywell International presentations. Chart by author. FCF data is in billions of U.S. dollars. FCF 2018 estimate is at the midpoint of guidance.

Putting all this together, it's not hard to make the case that Honeywell will generate around $6.5 billion in FCF in 2019, putting it on a forward FCF yield of 5.9% for 2019 -- in other words, the company could theoretically pay a dividend yield of near 5.9% to investors.

If you buy Honeywell's stock it isn't likely to shoot the lights out in terms of returns, but that doesn't mean it isn't a "no-brainer" when it trades with a $140 handle. Adamczyk thinks the stock was a "steal" at $165. If it can get back there in a year while providing a useful 2% dividend, then investors are looking at a return in the mid-teens for the next year.