Please ensure Javascript is enabled for purposes of website accessibility
Log In Help Join The Motley Fool
Free Article Join Over 1 Million Premium Members And Get More In-Depth Stock Guidance and Research
By Lee Samaha - Feb 28, 2018 at 8:04AM

The industrial giant is worth picking up for long-term investors.

With the market in a period of volatility, it's a good idea to start looking at entry points into stocks worth holding for the long haul. One such stock is Honeywell International (HON 1.40%). The company's recent results and guidance served notice of the stock's potential in 2018, so here's a look at five reasons to add Honeywell stock to your portfolio. 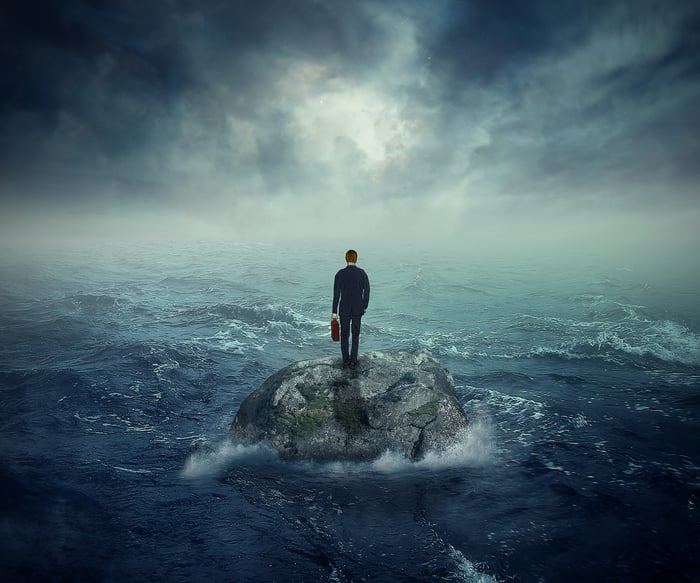 Management reiterated guidance for full-year free cash flow (FCF) in the range of $5.2 billion to $5.9 billion. To put this into context, the midpoint of guidance ($5.55 billion) represents more than 4.9% of Honeywell's current market cap of around $112.4 billion. That's a good value for a stock set to grow earnings at a compound annual growth rate of 10% in the next couple of years.

Moreover, as you can see below, FCF conversion from net income continues to rise as Honeywell is exiting a period of high investment and concurrently growing earnings. CEO Darius Adamczyk thinks there's more to come: "We told you we're trying to move toward a 100% [free cash flow conversion rate], we hit 90% in 2017. And we think prospects are good to drive that further in '18." 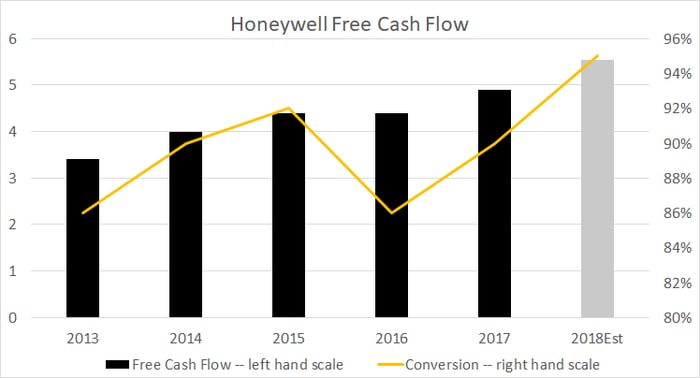 One of the criticisms leveled against Honeywell is a lack of top-line growth -- reported revenue increased at an average rate of just 1.5% per annum over the last five years. Boosting earnings by increasing productivity is always valuable, but it can't go on forever. As such, Adamczyk's stated aim is to improve organic sales growth and be more aggressive on capital deployment.

More cash flow generation (see above) will give management more firepower to do mergers and acquisitions (M&A) in order to buy growth, and so will the planned spinoffs of its transportation systems (turbochargers for the automotive industry) and home and global distribution business (climate and security controls and fire and security distributor). The spinoffs are expected to be complete by the fall, and with $3 billion from them, management will have more cash to deploy.

President Trump's Tax Cuts and Jobs Act has created a more favorable environment for repatriation of assets held overseas by U.S. corporations. For example, a one-time tax of 8% will now be applied to illiquid assets and 15.5% for cash held overseas. As such, Honeywell is one of many companies planning to repatriate cash in order to invest in its own business, return to shareholders or make M&A.

According to CFO Tom Szlosek, "Preliminarily we expect that at least $7 billion of the $10 billion in cash held by our foreign subsidiaries can be repatriated in the next two years," and the plan is "to more aggressively seek out M&A, particularly in the U.S."

All told, a combination of increased FCF generation, some $3 billion from spinoffs, and at least $7 billion from repatriation suggests Honeywell will have significant firepower for deals in the next few years.

Around 60% of Honeywell's business is "short cycle versus longer cycle," according to Szlosek on the earnings call. In a nutshell, this means Honeywell doesn't have a lot of visibility regarding the majority of its sales. Coincidentally, Honeywell's sales can pick up quickly in response to an improvement in the economy. Szlosek outlined that "It's best to be prudent and just really a little bit more on the caution side to really see how the business evolves" while giving guidance, so it's possible that Honeywell could surprise on the upside.

As you can see below, Honeywell's last two quarters have seen 5% and 6% organic sales growth, and management is only forecasting 2% to 4% for the first quarter and full year of 2018. Although the comparisons with 2017 will be much harder to beat than those of 2017 versus 2016, it's hard not to think that Honeywell might be a bit conservative with guidance, particularly as GDP growth looks set to receive a boost this year following the tax act. 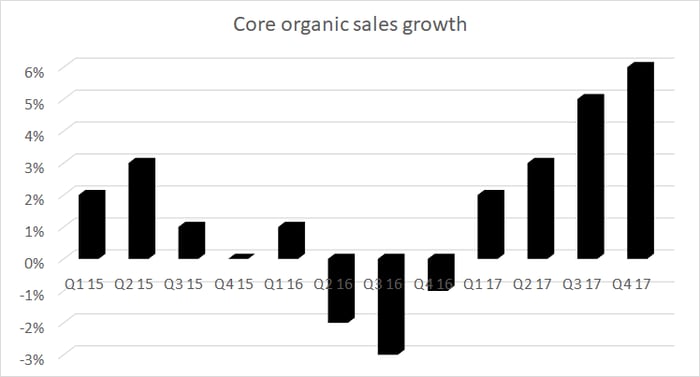 Moreover, it's worth remembering that management started 2017 forecasting 1% to 3% organic sales growth, only to hit 4% -- suggesting a tendency to be cautious with guidance.

Honeywell isn't a ragingly cheap stock, but even a fairly valued stock has the potential to grow its stock price in line with its earnings -- so it will be fairly valued in a year's time, too. On this basis, Honeywell is capable of delivering double-digit returns for investors.

Throw in a good chance of better-than-expected growth from an improving economy, conservative guidance or some earnings-enhancing acquisitions, and the stock is attractive for investors.