Ford Motor Company's (NYSE:F) rolling global restructuring has arrived in South America. The Blue Oval said on Tuesday that it will close a truck factory in Brazil and discontinue sales of heavy trucks in the region, the latest step in its ongoing effort to improve profitability in its operations around the world.

What Ford said: Another unprofitable product line is cut

Ford said after "months of pursuing viable alternatives," it has decided to stop selling heavy commercial trucks in South America, and to close the factory in Sao Bernardo do Campo, Brazil, that builds the trucks, because it sees no clear path to sustainable profitability in the business. 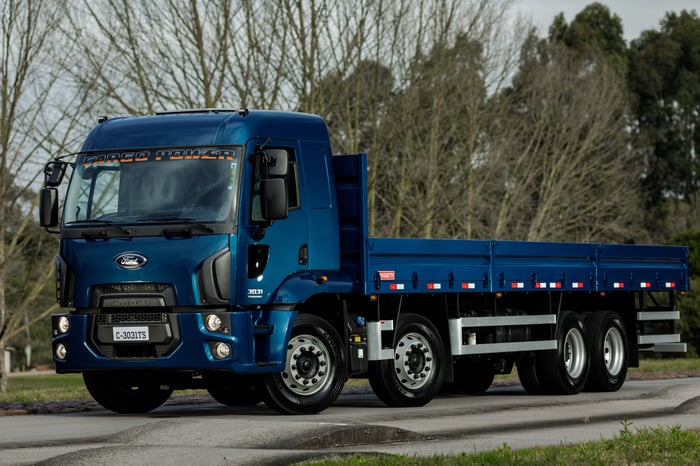 Ford will end production of its Cargo line of commercial trucks when it idles a Brazilian factory later this year. Image source: Ford Motor Company.

Ford's Sao Bernardo Assembly Plant employs about 2,800 people. In addition to commercial trucks -- the Ford Cargo line, the F-4000, and an older version of the F-350 Super Duty that is sold as a work truck -- the factory also builds the subcompact Fiesta for the South American market. Production of all of those vehicles will end later this year, Ford said, and sales of those models in South America will cease once inventories are sold.

Ford said that it explored alternatives that would have kept the plant open, including partnerships with other automakers and an outright sale of the operation. But, the company said, it concluded that it would have to make significant investments in its heavy-truck business to keep pace with the market, and those investments would not have made the business profitable.

In a statement, Ford South America chief Lyle Watters emphasized that the decision does not mean that Ford is leaving the South American market.

"Ford is committed to the South American region by building a sustainable and profitable business with strengthened product offerings, outstanding customer experience, and a leaner more agile business model," Watters said. "We know this action will have a major impact on our employees in Sao Bernardo and we will be working closely with all our stakeholders on the next steps."

Watters said that Ford will continue to provide parts and service in the region for the models that are being discontinued. Ford said that it will cut the Fiesta from its South American lineup as well. Image source: Ford Motor Company.

What it means: The "redesign" is underway

Ford CEO Jim Hackett has been working to "redesign" the company to make it leaner, more nimble, and more profitable. As part of that effort, Ford has already begun rolling out major changes to its operations in North America, China, and Europe.

It has been clear for at least several months now that Ford would give its South American operation a similar overhaul. Ford lost $678 million in the region in 2018, despite significant cost reductions and pricing gains -- a clear sign that more action was needed.

In a presentation to investors in January, Ford global markets chief Jim Farley said that Ford's business model in the region "needs to fundamentally change." He said that a "redesign" of Ford's South American operation was already in progress.

"We have been very focused on reducing structural cost and improving efficiency [in South America]," Farley said, noting that Ford South America reduced its headcount by 20% in 2018, and that it will move ahead with plans to discontinue the compact Focus in the region this year. "You can expect further news from us in South America over the course of this year," he said.

The decisions to close the Sao Bernardo Assembly Plant, to exit the commercial-truck business, and to discontinue the Fiesta all count as major moves. But Ford isn't done revamping its South American business: As Farley said, expect further news as the year unfolds.