To paraphrase an old saying, value is in the eye of the beholder. That said, with the stock market still near all-time highs, it's hard to find anything resembling a cheap stock. But it isn't impossible. Here's the proof.

Biotech Clovis Oncology (NASDAQ:CLVS) has been killed in the market, but there's a huge opportunity for one of its key drugs. Axon Enterprise (NASDAQ:AXON) is shifting into a new business and using a software-as-a-service offering to keep customers in its ecosystem. And energy major ExxonMobil (NYSE:XOM) is showing signs that it's starting to turn its energy business around. Take a look and you'll probably find at least one of these stock has a place in your portfolio right now.

George Budwell (Clovis Oncology): Clovis Oncology, a biotech that has lost a staggering two-thirds of its value over the preceding 12 months, could turn out to be absurdly undervalued at current levels. This beaten-down biotech, after all, is trading at a ridiculous 0.66 times its projected 2025 revenue haul. 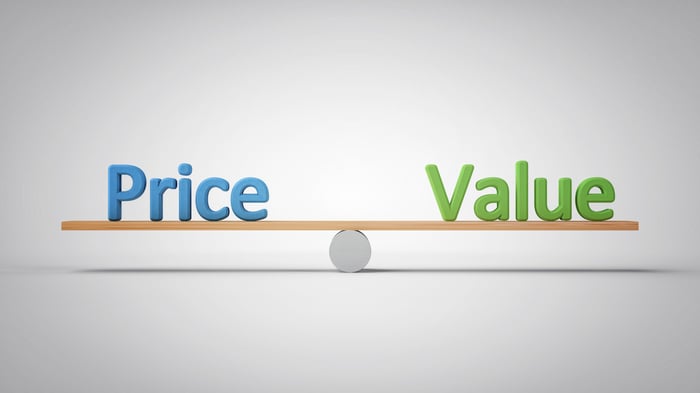 Clovis has two inter-related problems that have weighed heavily on its shares of late. First, the drugmaker's ovarian cancer drug Rubraca has lagged well behind its chief competitors from AstraZeneca and GlaxoSmithKline. Rubraca's second-quarter sales came in at a mere $33 million. That's a seriously disappointing revenue figure for a drug that was once forecast to be a potential blockbuster. Second, Rubraca's underwhelming sales haven't been able to cover the company's rather costly clinical program. Clovis, in fact, posted an unsightly $120 million net loss in the second quarter of 2019.

The good news is that Clovis might be nearing an inflection point. Before the end of the year, the drugmaker plans on approaching the Food and Drug Administration (FDA) about expanding Rubraca's label to include BRCA-mutated metastatic castration-resistant prostate cancer. This high-value indication has the potential to significantly beef up the drug's flagging sales in the years ahead.

Keeping with this theme, the top industry research firm EvaluatePharma thinks that Rubraca's sales could rise to a noteworthy $634 million by 2023 with a successful label expansion into prostate cancer. That's a noteworthy revenue forecast, especially for a biotech with a market cap currently hovering around $500 million.

Focus on the market capitalization

Brian Stoffel (Axon Enterprise): It's nearly impossible for me to recommend an "absurdly" cheap stock from the ones I personally own based on traditional metrics -- like price-to-earnings (P/E) or price-to-free-cash-flow (P/FCF) ratios. There is one, however, that I believe has massive room to grow in the decade ahead based on market cap, or the overall value of the company: Axon Enterprises.

For those unfamiliar, the company used to be known as TASER International. It changed its name in 2017 to highlight the fact that it now has virtual monopolies in two industries: stun guns and body cameras.

While the monopolies are nice, it's the burgeoning software-as-a-service segment that really has me excited. When police departments start paying monthly fees for storage and analysis of their footage, they are normally with the company for life. The introduction of new services -- like a records management system that promises to cut paperwork immensely -- only makes the service stickier.

But for all this, the company is valued at just $3.8 billion. Part of this is likely because the company is giving away many of its services at little cost -- for a while. But once users are in Axon's ecosystem, they're likely there to stay. Which makes me believe the stock's market cap -- and, thus, price -- is absurdly low.

Reuben Gregg Brewer (ExxonMobil): Global integrated energy giant ExxonMobil is trading with a huge 4.8% yield, the highest it has been since the 1990s. Its price to tangible book value, meanwhile, is lower than it has been since the late 1980s! One of the best-run oil majors in the world is looking very cheap today. 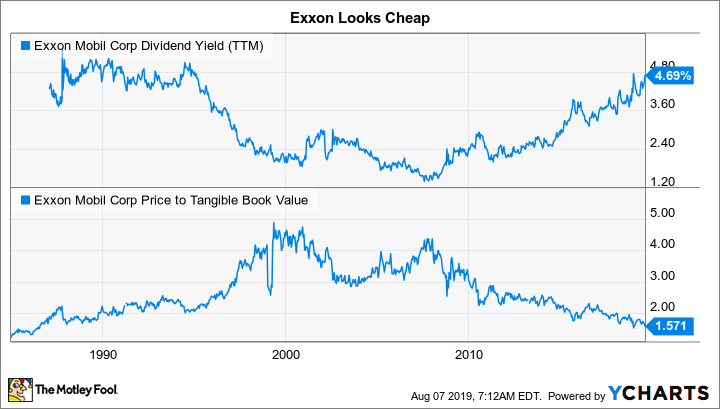 Exxon, with an over $300 billion market cap, is a conservatively run and giant ship that tends to turn slowly. But -- here's the key -- it has the financial strength to take its time because debt makes up only about 10% of its capital structure. That's among the lowest debt levels of its peer group and gives it ample room to fund its dividend and execute its growth plans even if oil prices were to fall.

And while Exxon is a little behind the curve on production (its production volume has been falling in recent years, while many peers have been expanding their output), it has big plans to fix the issue. More important, its efforts are starting to produce results on the strength of just one of several major growth projects that will come on line by 2025. It wouldn't be fair to say that Exxon is hitting on all cylinders, but it's moving in the right direction. And the time to act is now, while investors are still reluctant to give the oil giant credit for its recent successes.