Please ensure Javascript is enabled for purposes of website accessibility
Log In Help Join The Motley Fool
Free Article Join Over 1 Million Premium Members And Get More In-Depth Stock Guidance and Research
By Brian Stoffel – Nov 13, 2018 at 6:04AM

These two facts were seen as weaknesses. I disagree.

On November 6th, Axon Enterprises (AXON -1.32%) -- maker of police equipment like stun guns and body cameras -- released its third-quarter earnings report. After reading through the release and conference call, I thought there was a lot to be excited about.

The market disagreed, however, sending shares down by as much as 17%.

As a long-term investor in the company, I wasted no time adding shares. My conviction in the company is so high that it is now my family's third-biggest holding, accounting for 8% of our real-life portfolio. There were two tid-bits in particular that sent shares reeling, which I believe was very short-sighted. 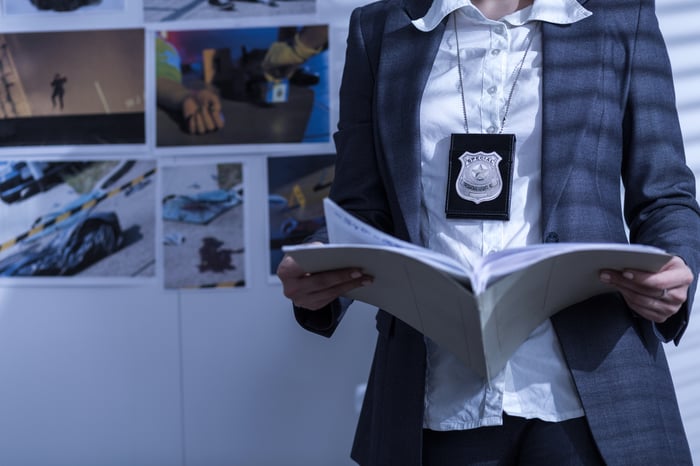 My thesis for investing in Axon centers on its pivot to a software-as-a-service (SaaS) company. All of the footage from Axon body cameras go on Evidence.com, the company's platform. Police stations pay a monthly subscription to store, analyze, and learn from that footage. That creates very sticky revenue, and a wide moat with high switching costs.

But sales of the company's eponymous TASER stun guns still make up roughly three-quarters of revenue. During the third quarter, sales of those weapons slowed dramatically, which likely spooked Wall Street. 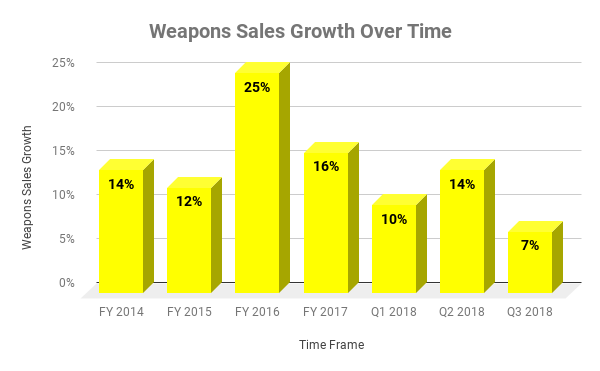 It's worth noting that the last three data points are for the first three quarters of this year, while the rest are annual. That's because it's important to see the trend that investors are worried about. Even if Evidence.com is the thesis, if TASER sales start stagnating Axon might have trouble investing in its burgeoning cloud ambitions.

But there was a perfectly logical, if not exciting, reason for the shortfall. Police departments were simply putting off their purchases until the newest non-lethal weapon -- the TASER 7 -- is released.

Said founder and CEO Rick Smith on the conference call:

I have not seen as much excitement about our new TASER weapon since the X26, which we introduced back in 2003. Customers who've seen it absolutely love the new TASER 7. I believe TASER 7 creates a super compelling upgrade proposition for every existing TASER customer, which effectively resets our ability to drive a whole new upgrade cycle.

But while the reception has been positive, management only expects a modest contribution from the TASER 7 in the fourth quarter. Much more of the gain will come in 2019. I have no problem waiting for that -- and no long-term investor should.

Giving it all away for free

The other major announcement was progress with Axon Record, the company's records management system (RMS). In plain English, it's a program that's designed to take the data that Axon body cameras collect -- both audio and visual -- to help make paper-work less laborious for officers. That will free them up, the thinking goes, so they can spend less time behind the desk and more time connecting with the community.

Axon Record is expected to be rolled out in the second half of next year, but don't expect any major revenue to come from it for a long time. Here's why, in Smith's own words:

There will be add-on functionality that departments can sign up and pay for before that five-year window passes, but it means waiting until 2024 -- at the earliest -- for the company to realize the full benefit.

That might sound like a hefty price to pay for revenue long down the road. But it's the exact same blueprint the company used for Evidence.com: It gave its Axon body cameras and one year of Evidence.com away for free to drive adoption.

I can't blame Axon bears for being worried. Axon currently trades at 63 times trailing (non-GAAP) earnings, and 60 times trailing free cash flow. Revenue is only expected to grow 20% at the high-end in the fourth quarter.

But think about owning this stock in 2030! Axon already has a monopoly on non-lethal stun guns. Once departments have all of their footage stored and analyzed on Evidence.com -- and all of their paperwork is handled with Axon Record -- the switching costs will be through the roof. That means little competition, with stable, recurring revenue coming in month after month.

We might have to wait longer than we'd like for that day to come, but with over 25 years until my own retirement arrives that's a bet I'm willing to take.

Is This Red-Hot Growth Stock the Apple of Law Enforcement?