Axon Enterprises (NASDAQ:AAXN) -- better known by its former name, TASER International -- is on fire. Shares are up 250% in just eight months, leading many to believe the stock is too expensive.

I'm not among those naysayers, though. In fact, Axon is now my fourth-largest holding, making up 7% of my real-life stock portfolio. And I have no intention of selling any time soon. The value that Axon brings to law enforcement and the ubiquity of its stun guns and body cameras lead me to believe there's still lots of room for this company to grow. 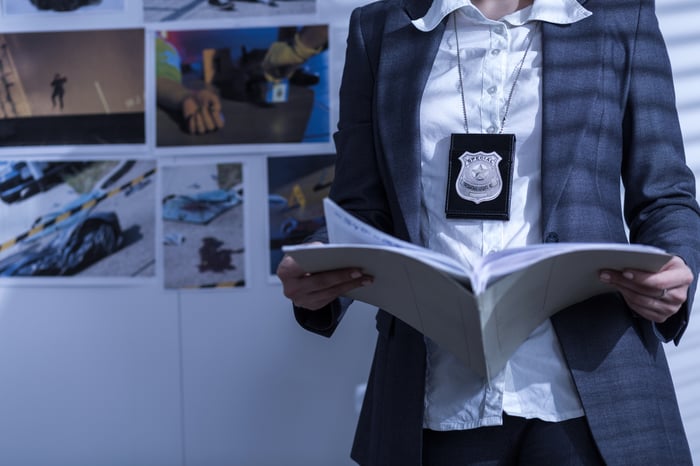 Here are ten reasons why I am so bullish on the stock's potential moving forward.

1) It has a compelling mission

2) Axon has shown it can pivot to capture opportunities

Those "other ways" of protecting life include police body cameras. Over the past five years, we have seen -- time and again -- that body camera footage has been a crucial piece of evidence in holding both police and criminals accountable. Their presence has been shown to reduce violent interactions involving police officers.

The key here is that Axon is not content to rest on its laurels. That's why it changed its name and pivoted toward body cameras -- it was another profitable way to protect life.

While the Axon body cameras the company manufactures are important, the real measure of success in this division is Evidence.com. Police departments pay monthly subscription fees for their officers to download, store, and analyze body camera footage on its platform.

Since the company began reporting the number of seats booked on the Evidence.com platform, results have been promising. 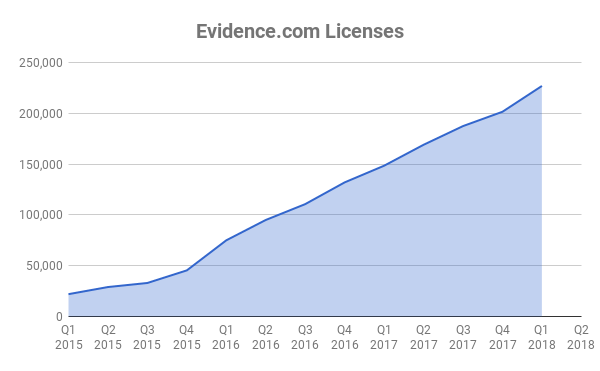 4) New products are on the horizon

As with its pivot toward body cameras, however, Axon isn't content to rest on its laurels. Over the next twelve months, we'll start getting results from a number of new services and products the company is offering, including:

5) The competition has been acquired

In late 2016, there was rumbling in the body-camera business when New York City decided to award its body camera business to Vievu over Axon. Though that represented a major loss for the company at the time, that's no longer the case: Vievu has since been acquired by Axon.

6) There's a huge and growing moat

But even if Axon hadn't been able to nab Vievu, it still has two powerful moats -- or sustainable competitive advantages -- that are protecting it business.

The first are high switching costs. Once a police department starts loading and analyzing all of its body camera footage on a single site, switching costs become high. Not only would migrating all of that data to a different provider be expensive, it would also be a headache to retrain entire work forces on a new platform and risk losing mission critical data in the process.

The second major moat comes from the network effect. Each additional user of Evidence.com makes the overall platform more valuable to current and future users thanks to the company's artificial intelligence (AI) initiatives. As more departments store data on Axon's servers, its AI machines have more to feed into its algorithms -- making them more accurate in analyzing data and in helping manage records. Over time, that data advantage can make a huge -- and insurmountable -- difference.

7) Don't forget about the Tasers

But let's not forget what got Axon this far in the first place: stun guns. The company hasn't abandoned that line of business. In fact, it provided two-thirds of gross profit last year. Coming into 2018, in fact, sales from weapons -- which are buoyed by the fact that stun guns have consumable parts that need to be continuously reordered -- grew by 17% per year since 2013. 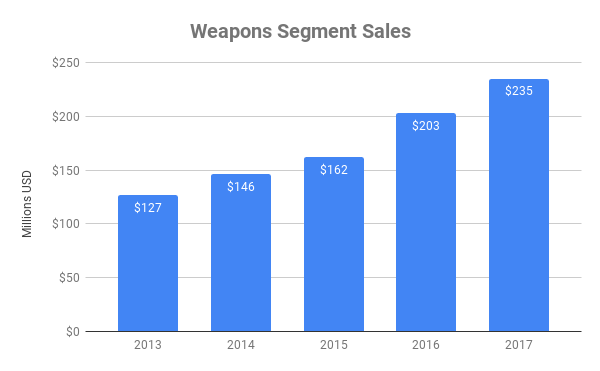 8) Management with skin and soul in the game

Axon is still run by Patrick Smith, the founder who started the company from his garage over twenty years ago. I consider this to be a huge positive: Founders often view their companies as extensions of themselves, and are motivated to build lasting value in them.

Smith also has a compensation package that pays him almost nothing in yearly salary, but will reward him handsomely if the company can meet certain goals -- one of which includes reaching a market cap of $13.5 billion. That's over three times what the company is worth now.

One of the biggest concerns when I initially invested in Axon was the fact that the company was spending heavily on its body cameras, giving them away for free while relying heavily on the weapons segment to pay the bills. If tough financial times hit, I thought, the company would be in trouble.

But that's not as much of a concern now. Not only does Axon sport cash and investments of $97 million with absolutely no long-term debt, it has also generated positive free cash flows of $34 million over the past twelve months. That means the company is on solid footing and can fund its growth moving forward.

Finally, while it might be discouraging to see that you've missed out on a stock that's tripled in such a short time, it's important to take the long view. Axon is still worth just $4 billion -- a "small cap" stock in investing lingo.

Axon believes that the total addressable market (TAM) for all of its solutions has grown to $6.5 billion with the addition of Records Management Systems (TAM of $2 billion) and in-car cameras (TAM of $475 million). To put this in perspective, Axon has  sales of just $366 million over the last twelve months. If the company were to eventually capture just half of the TAM, it would represent a nine-fold increase in sales!

Patrick Smith and his board obviously believe Axon can reach $13.5 billion over the next decade. And when you consider the reliable income that subscription revenue to Evidence.com creates -- combined with a solid weapons business -- it's not hard to believe there's still lots of room for growth.

As I said at the outset, Axon already accounts for 7% of my real-life holdings. At that level, I won't be adding any more to my portfolio, but I also have no intention of selling. If you're looking for a small cap stock with a wide and growing moat -- as well as several new products to catalyze further gains -- Axon is worthy of your consideration.