Please ensure Javascript is enabled for purposes of website accessibility
Log In Help Join The Motley Fool
Free Article Join Over 1 Million Premium Members And Get More In-Depth Stock Guidance and Research
By Travis Hoium - Feb 7, 2018 at 8:34AM

Body cameras may just be the beginning for Axon.

When taser and body camera maker Axon (AXON -1.15%) announced on Monday that it had hired a "team of world-renowned imaging and VR/AR experts," it came as a bit of a surprise. Virtual reality might not be the first thing you think of in connection with law enforcement, but it may become an important technology that police can use to increase their effectiveness.

By investing in virtual and augmented reality, Axon is also showing a willingness to experiment with new products that could help it to maintain its leading market position in the future. 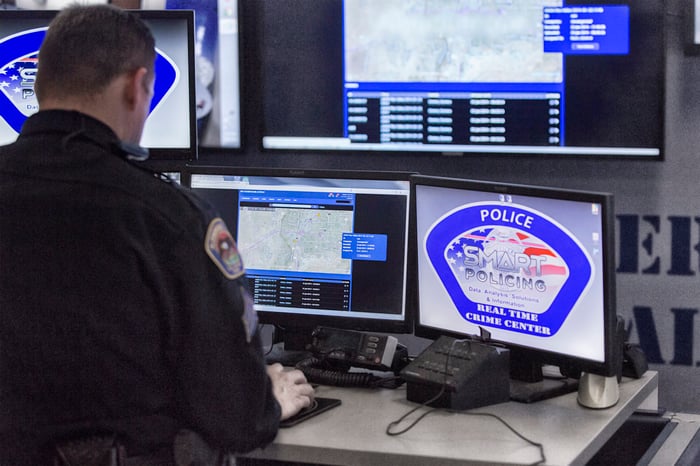 What Axon is doing

Axon said it had opened a new R&D facility in Tampere, Finland, that will lead the charge into VR and AR. The press release described the mission this way:

This group will focus on enhancing the capabilities of Axon's future wearable and in-car cameras and developing a platform for future advancements that leverage Augmented Reality (AR), Virtual Reality (VR) and Artificial Intelligence (AI).

The team had been part of Nokia, and then Microsoft, gaining industry expertise in the imaging market. But with Microsoft shutting down Nokia, the respected team of imaging engineers needed a home for their talents, which is where Axon stepped in.

How Axon views VR and AR

You see Axon's vision for its next-generation products starting to form. It invested in artificial intelligence capabilities last year, and is now adding virtual and augmented reality. Long term, I could see the company being able to create fully immersive views of incidents using the feeds from multiple Axon cameras. It's also likely their content will be searchable using artificial intelligence, meaning law enforcement would be able to find a person or item, then follow it through the video stream.

It'll likely be years before we see virtual reality cameras in police officers' cars, but it may happen. And that would be truly revolutionary for all of law enforcement.

Axon has stayed a step ahead of competitors by bringing together leading-edge technologies in one simple-to-use package. It started with body cameras, then expanded into the cloud, and in 2018 will tie its products more closely together with a holster that turns body cameras on when a gun is drawn, and a records management system. Advancing into virtual or augmented reality is the next step in the product line.

If Axon continues to push the technology envelope, it'll entrench itself more completely with law enforcement around the world. This week's announcement may sound crazy on the surface, but if you look at it as a way to bring valuable technology to police that will help them do their jobs better, while simultaneously keeping the company ahead of its rivals, it appears to be a great move for its shareholders.