In April 2017, TASER International -- maker of the well-known stun guns -- went all-in on its new business strategy by renaming itself Axon Enterprise (NASDAQ:AAXN). "Axon" is the name of the body cameras that the company sells to law enforcement agencies, and the change highlighted the shifting focus with the company.

But while the body cameras themselves are in the spotlight, they aren't actually that important as far as investors are concerned. Instead, the main drivers for long-term growth and profitability are the Taser weapons and -- more importantly -- the Evidence.com platform where all of that body camera footage is stored and analyzed. 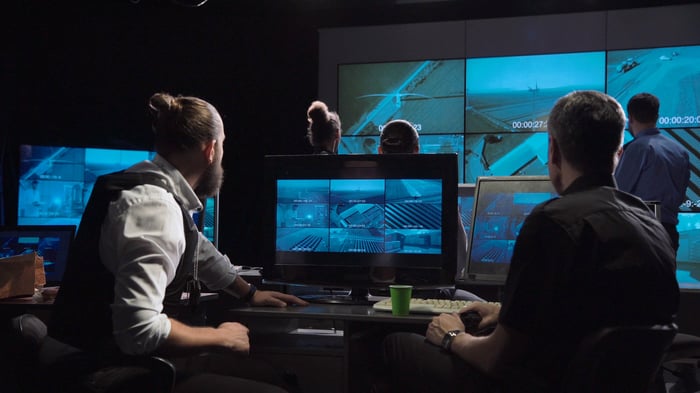 To give you an idea for what I mean, let's look at sales for each of the company's three main segments -- Taser weapons, Axon body cameras, and Evidence.com -- over time.

The last two columns are the most important for our purposes. They show that Tasers account for 65% of the company's revenue, and they are growing at a 19% clip. The segment relies on a razor-and-blades model for profitability, with the stun guns sold at lower margins, but consumables sold at much higher ones. As a unit, the weapons segment enjoys gross margin of 67.7%.

The Axon body cameras, on the other hand, account for just 16% of sales, but are growing at an even better 50% per year. But here's the thing: There's nothing inherently special about Axon's cameras. Any technology company with a substantial R&D budget can manufacture a rival. Because of this, gross margin is much lower, coming in at 31.9%. Perhaps that's why the company was willing to give away the cameras for free to any law enforcement department that asked for them.

The real star here is the Evidence.com platform. Not only is it growing the fastest -- more than doubling every year -- but it has the highest margins: 78.7% during the first quarter of this year. The company invests up front in the platform and then each additional subscription adds money that flows directly into Axon's coffers.

When we add all of this together, the contribution to the company's gross margin looks like this. 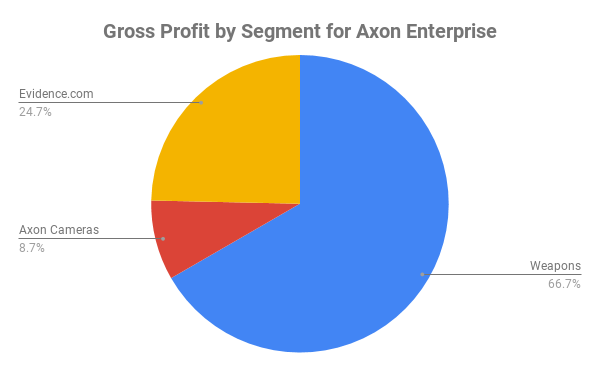 This chart should put to bed any confusion about where the important moving pieces are for Axon.

How to view the company moving forward

Obviously, selling Axon cameras is still important to the company: Without them, there's no way police departments would be interested in Evidence.com. That said, the money the devices bring in isn't terribly important to investors.

Already, advantages that come with having multiple revenue streams are starting to show up. Axon's main competition in the body camera business -- VieVu -- just agreed to merge with Axon. One of the chief reasons was that VieVu simply didn't have the capital necessary to invest in a software platform to rival Evidence.com.

And Axon has a number of different services related to Evidence.com coming out in the next year. Chief among them is a records management system (RMS), which is going to use artificial intelligence (AI) to help take footage from Axon cameras and translate that footage into completed paperwork for officers. Not only will this streamline paperwork for police officers, but it will free them up to spend more time on the streets.

While the stock isn't cheap by traditional metrics -- it trades for well over 200 times trailing earnings -- this type of growth potential has me excited. That's why I have over 6% of my real-life portfolio invested in the company. If you have a long-term time horizon and can stand the ups and downs that come with a volatile growth stock, I think you should consider buying shares, too.