Companies that have a razor-and-blade model use a pricing strategy that involves selling a durable product, or "razor," at a low profit margin (sometimes even giving it away) to help drive sales of the higher-margin proprietary consumable or disposable products, or "blades."

The goal of companies that have this type of business model, which reportedly owes its name to Gillette's introduction of safety razors with disposable blades in the early 1900s, is to sell as many "razors" as possible in order to generate an increasing stream of recurring income from "blade" sales over the life of the "razor."

Here are some diverse examples of companies that use a razor-and-blade strategy to varying degrees.

Let's examine the first four of the above companies.

The razor-and-blade model owes its thanks to Gillette for its name. Image source: Getty Images.

Global consumer products titan Procter & Gamble uses a razor-and-blade pricing strategy to sell its Gillette-brand razor handles and disposable blades. In 2015, the company had 18 brands that generated at least a billion dollars in sales each, with Gillette being just one of them. So the company is not a pure razor-and-blades play, or even close to one.

Keurig Green Mountain, which pioneered and popularized single-serve coffee brewers, adopted a razor-and-blade business model after the company -- then called Green Mountain Coffee Roasters -- acquired single-serve brewer maker Keurig in 2006. Keurig was bought out in early 2016 by an investor group led by privately held JAB Holdings, so its stock is no longer publicly traded.

Keurig's single-serve coffee brewers (and other brewers and beverage makers) are the "razors," and its K-cup coffee pods (and other pods and portion packs of different sizes) are the "blades." Keurig's original pricing policy involved selling its brewers and other beverage makers at only a small markup over its costs in order to entice as many consumers and businesses to buy them; we can assume its current general policy probably remains similar. The company makes most of its money on the recurring revenue stream of consumable pods and other portion packs, which are sold at a higher profit margin.

Keurig provides a great example of both how razor-and-blade business models can be extremely lucrative and how they can eventually stumble. Soon after Green Mountain Coffee Roasters fully acquired Keurig in 2006, the company's business soared, along with its stock price. Consumers and businesses loved the convenience of Keurig machines and were locked into buying the company's proprietary K-cups. However, once certain key patents on Keurig's K-cups expired in 2012, competitors entered the market with less expensive coffee pods for the original Keurig brewers, and the company's fortunes ebbed and flowed after that time. 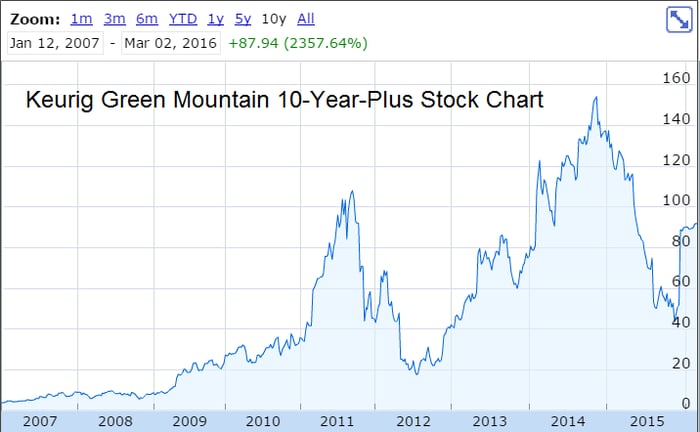 The market sent Keurig shares tumbling in 2011 and 2012 due to concerns about upcoming patent expirations and a couple other issues. Image source: Google Finance.

Keurig took steps to counter the challenges presented by the expiring patents. These included launching other brewers and beverage makers and equipping the Keurig 2.0 brewer with technology to lock out unauthorized coffee pods. These efforts were met with mixed success, however.

Both leading diversified 3D printing companies also have service businesses that do not use razor-and-blade strategies, so neither is a pure play. Moreover, some might not consider the business models they follow in their products businesses to be pure razor-and-blade models (which is why I used the term "razor-and-blade-like" above). A pure model of this type usually involves selling the "razor" at cost or just a little above cost, or even slightly below cost. 3D Systems and Stratasys price their 3D printers to make solid profits on them. However, they make considerably higher profit margins on the consumable print materials, which are proprietary.

The effectiveness of these business models is illustrated by the fact that, while the revenue 3D Systems generated from 3D printer sales declined 6% year over year in the third quarter, the revenue it took in from sales of print materials climbed 9%.

Razor-and-blade business models can be lucrative when they're working well, but they can stumble when competitors enter the market with a compelling "razor" that uses less-expensive "blades" -- or, as in Keurig's case, competitors launch "blades" that fit the company's "razor," as often occurs when patents expire.