But I believe I have found a diamond in the rough: a company worth less than $2.5 billion today that has the potential -- as well as leadership who has laid the groundwork -- to create enormous stock returns. That company is Axon Enterprise (NASDAQ:AXON), formerly known as Taser International. Axon is a vendor of police body cameras as well as a host of other services -- primarily in North America, with small but growing operations globally as well. 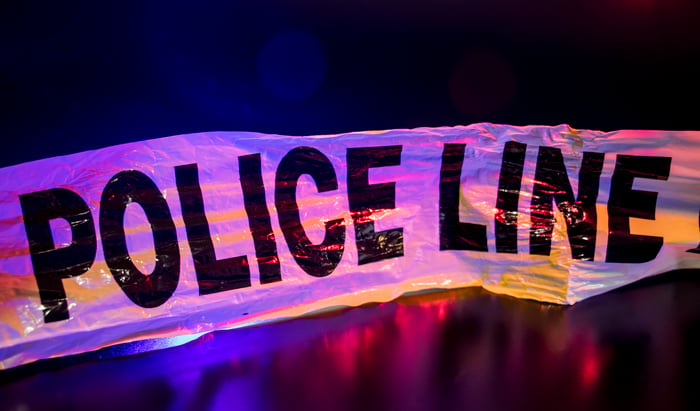 The enormous potential at Axon

Founded by current CEO Rick Smith in the 1990s, the company got its start with its eponymous Tasers. While the company had to wait until 1998 to market Tasers to law enforcement, they have exploded in popularity since. In 2017 alone, the company sold over 150,000 Tasers and 2.4 million cartridges.

But what has me really excited is the company's commitment to its overarching mission: "to protect life," as its mission statement attests. Internal studies by Axon show that Tasers specifically have likely been responsible for saving over 190,000 lives.

But last year's name change to Axon reflects a new focus in saving lives: using body cameras to develop the largest database of public safety footage in the world. Dubbed Evidence.com, the data platform not only helps hold officers and citizens accountable, but it also promises to use artificial intelligence (AI) to help get more cops out from behind the desk and onto the streets by eliminating hours of paperwork. The measurable effects of body cameras on police outcomes (compared to outcomes when cameras aren't used) have proven impressive, according to studies by Cambridge University with the Rialto Police Department in California. 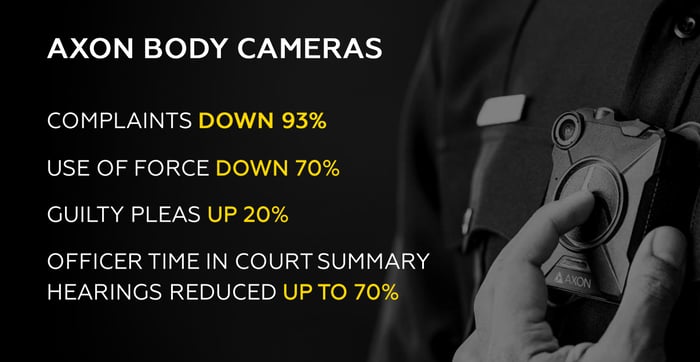 It's important to note that the Taser division is not only still important, but still growing. Last year, the weapons segment grew an astounding 68% and accounted for over two-thirds of revenue. That alone would make Axon an exciting investment.

But Axon isn't resting on its laurels. The sales of these weapons are helping finance the future. Smith understands that body cameras are low-margin products with no moats. That's why in early 2017 the company started giving them away for free to any U.S. or Canadian police department that wanted them, along with a one-year subscription to Evidence.com.

It's the subscription to the platform that is the growth hook. The company has been adding Evidence.com user licenses in droves. 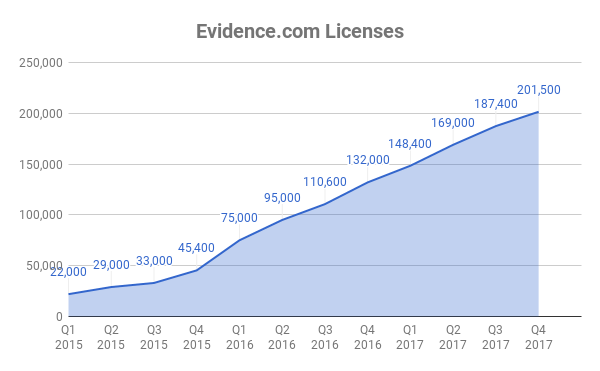 Each one of these licenses is worth either $180 (Evidence.com Basic) or $468 (Evidence.com Pro) annually. A number of the licenses are still on the one-year free trial, but we know that the platform alone brought in $58 million last year.

Once a police department has all its footage on Evidence.com, switching costs are very high. A police department would not only have to pay a fortune in hours and labor to migrate all its data to another provider, but it would also have to retrain entire workforces and risk losing vital legal data in the process. While I can't put an exact figure on how expensive such a migration would be, that's because Evidence.com is the first to provide such a service at such a scale. At the same time, any migration away from SaaS providers has proven to be costly and to keep the service sticky.

It's important to note, also, that Evidence.com is much more than just a storage solution. Axon started building out its AI capabilities last year with the acquisition of two AI start-ups, Dextro and Misfit (the latter acquired from Fossil Group.) The idea is that these deep-learning and computer-vision additions will make the entire database of film searchable in much the same way that we use Google on a daily basis. That's serious functionality that police departments can't find anywhere else right now.

Axon can pull this off only because it has excellent financials. The company hasn't carried any long-term debt since 2005. At the end of last year, it had $119 million in cash and -- despite all the camera giveaways -- was free-cash-flow positive to the tune of $8 million. Because body-camera competitors like VieVu -- which fiercely battled with Axon for New York City's contract -- and Digital Ally lack a weapons segment that can finance such investments, Axon has a clear lead.

There are multiple ways Axon can win

By investing in Axon, you are getting much more than just a Taser weapons division and the Evidence.com platform. You are getting exposure to a company with multiple futures. Smith has shown a knack for the very best type of growth: low-risk, potentially high-reward trial-and-error tinkering.

Smith has lots of other new products that have either recently been released or are on the docket -- for instance, dual-facing car cameras, and smart holsters, called Signal Sidearm, that start recording when a weapon is drawn. But none are more exciting than the company's records management system, Axon Records -- which promises to work in tandem with data from Evidence.com to free officers from paperwork. According to Axon, a 2017 study by Denver's police department showed that for every 1% reduction in time spent on administrative tasks, the department could put the equivalent of 15 more officers back onto the streets.

As with any investment, Axon isn't without its risks. Right now, the stock is trading for over 400 times trailing earnings -- a very expensive price tag. As the free trials come to an end and police departments start paying for their Evidence.com access, I expect this to change.

There's also the threat of data breaches, which would be an enormous problem if it ever occurred to Axon. The company already operates in a highly politicized environment, and losing data or having evidence compromised could represent a huge blow. Finally, because the law enforcement field itself is heavily regulated, there's always the threat of elected officials stepping in and enforcing stringent standards on the company's growth prospects.

Most of these are threats anyone investing in software-as-a-service companies has to deal with, but they're ones to keep in mind before allowing the company to become an outsize portion of your portfolio. That's why I don't plan on allowing Axon to become more than 10% of my holdings until it has proven it can gain traction with new offerings like records management.

For the time being, we can monitor how well Axon is doing by tracking the number of Evidence.com licenses. But because of the open-ended way Axon is approaching growth, the key metrics that we'll be monitoring will likely change over time. That's a very good thing.