Please ensure Javascript is enabled for purposes of website accessibility
Log In Help Join The Motley Fool
Free Article Join Over 1 Million Premium Members And Get More In-Depth Stock Guidance and Research
By Brian Stoffel – Apr 6, 2018 at 9:33AM

One produces guns and bullets. The other wants to make them obsolete. Which stock comes out ahead?

After a spate of recent school shootings, guns are in the headlines again. Perhaps that's what will make today's matchup interesting. One company -- Sturm, Ruger (RGR 1.50%) -- manufactures the weapons. The other -- Axon Enterprises (AXON 4.29%), formerly known as TASER International -- has a stated purpose to make the bullets obsolete.

It's an interesting dichotomy to investigate. But we'll go beyond moral posturing to look at the fundamentals of each company. We'll determine which is a better buy at today's prices by evaluating each through three different lenses. 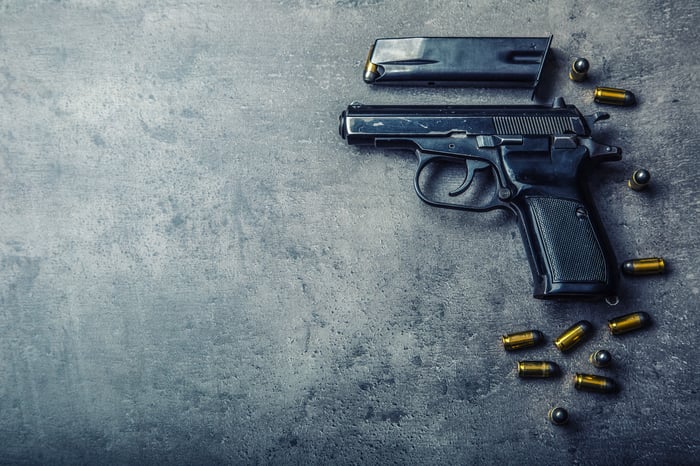 We'll start off with the easiest of the three to decipher: financial fortitude. The goal here is to figure out where a company falls on three different points of a continuum.

Crucially, an antifragile company can emerge stronger by buying back shares on the cheap, acquiring distressed rivals, or simply undercutting the competition on price. Keeping in mind that Axon is valued at over twice the size of Ruger, here's how the two stack up.

While both companies are buoyed by being debt-free, it might seem like Ruger has the upper hand: It has much stronger cash flow.

But I don't think that's necessarily the case. One of the reasons Axon's cash flow has been hampered is that the company is actively expanding into the police body-camera business -- which includes giving cameras away for free to any law enforcement officer who wants them. Before this effort began in earnest, free cash flow came in at over $40 million in 2015. While painful in the short-run, the move makes long-term sense: departments using Axon cameras will subscribe to the Evidence.com platform for storage and analytics, and they will have very high switching costs (more on that below).

The other aspect has to do with competition. Axon is competing against much smaller camera companies -- like VieVu. If an economic crisis hit, Axon would be in a strong position relative to competition.

In the end, I'm calling this a draw.

Next, we have a slightly murkier variable: valuation. While there's no single metric that can tell us how "cheap" or "expensive" a stock is, we can consult multiple data points to build out a more holistic picture.

On this facet there's no contest. High expectations are baked into Axon's price; Ruger is not only cheaper on every metric, but it also offers dividends to shareholders.

Finally, we have the most important -- and prosaic -- of the three criteria: sustainable competitive advantage, often referred to as a company's "moat." At its core, a moat is that special something that keeps customers coming back to one company, and shunning the competition, for decades.

Ruger's primary moat comes from the strength of its brand name. That's nothing to sneeze at, but it's also the very same moat that Axon has when it comes to its weapons segment. The company's stun guns -- Tasers -- have a ubiquitous presence in police forces around the world.

What gives Axon the edge? Departments that use Axon body cameras then store and sort their footage on the Evidence.com platform. Evidence.com not only stores footage, but uses AI to make the data searchable. The company will also be coming out with a records management system (RMS) this year which could save departments thousands of staff hours.

Both of these services -- Evidence.com and the upcoming RMS -- will be available on a subscription basis. That not only provides predictable recurring revenue, but creates high switching costs for departments that sign on. No one would want to risk losing evidence, or pay for data migration away from Evidence.com, unless there was a very strong incentive to do so.

That gives Axon the edge here.

So there you have it: a tie. Whenever this is the case, I always side with the company benefiting from the widest moat. In this case, that means Axon. I have my own skin in the game here, as well, as the company makes up 5% of my real-life holdings. I think if you're looking for a wide-moat play in law enforcement -- and have the stomach for volatility along the way -- Axon is definitely worth investigating.

Is This Red-Hot Growth Stock the Apple of Law Enforcement?

Why I Just Bought (More) Shares of Axon Enterprises