Kudos to Walmart (NYSE:WMT) CEO Doug McMillon for thinking outside the box.

The retailer's 4,800 stores peppered across the United States mean most of the country's consumers live within 10 minutes of a Walmart location. Using them to sell groceries and a variety of general merchandise is always going to be its core business, but Walmart's footprint could be monetized in a variety of other ways. And McMillon is exploring those opportunities.

Of all the ways the company could do more with its space, though, a few of McMillon's new ambitions sound like a lot of expensive and complicated work with no assurance of a substantial payoff. Indeed, even if the retailer does well with its new initiatives, they pose the risk of distracting Walmart from operations that matter much, much more, such as its rapidly expanding e-commerce arm. 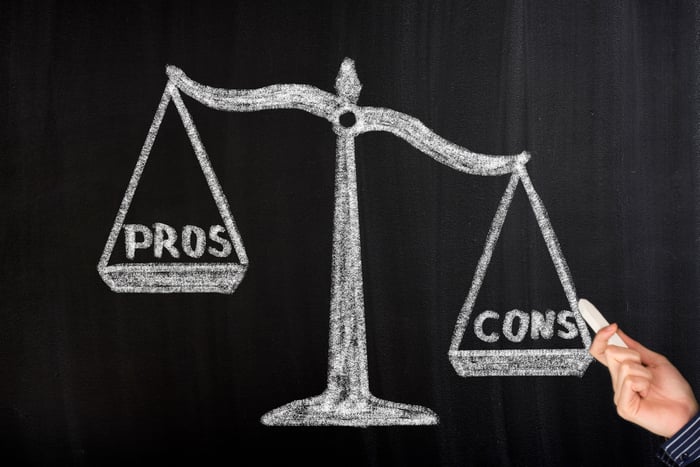 Walmart is kicking the tires of new business ventures

McMillon laid out the details of his plan at a recent corporate strategy meeting, explaining that the company could make better use of its geographic footprint. He presented several opportunities to his top brass.

One of those ventures is getting into the cellphone tower business by allowing wireless telecom service providers to install 5G antennas on its stores' roofs. In the same vein, Walmart's geographic diversity makes its stores well-suited to provide cloud computing solutions, inherently solving a problem Amazon.com (NASDAQ:AMZN) and other cloud companies constantly face: The lag time of sending and receiving digital information over great distances. McMillon is even toying with the idea of gathering and then selling shoppers' spending behavior data, ramping up its primary healthcare offerings, and allowing third parties selling through Walmart.com to utilize the retailers' warehouses and logistics platform.

The initiatives seem like a smart next step -- even intuitive. Consumers and corporations alike are less averse to buying services from organizations that operate completely unrelated businesses. Amazon is one of those names, though hardly the only one. There are other examples, like 3M making everything from Post-Its to auto-maintenance consumables to fire-suppression solutions. Another example is cable television service provider Comcast operating several amusement parks around the country. Organizations no longer have to operate in silos.

Those models don't make for an apples-to-apples comparison to Walmart's strategic intent, though, for one overarching reason: 3M, Comcast, and Amazon are already in those disparate businesses. They have been for a while. They're all fairly far down their learning curves and past the point where new costs are relatively high compared to the incremental revenue added to the top line. Walmart is starting from scratch, and doing so with no portion of the existing budget earmarked for these new businesses.

To be fair, not everything McMillon has planned will cost money, nor will it interfere with the retailer's current operation. Walmart only needs to grant telecom carriers access to its stores' roofs in order to erect 5G infrastructure. Data collection on its shoppers won't be a terribly big burden either, financially or operationally. Alibaba is one of a handful of companies that offers turn-key consumer monitoring solutions to retailers and their vendors.

However, setting up cloud computing servers somewhere in (presumably) most of its stores wouldn't be cheap or easy.

There's a reason public data centers are big, with owners operating as few of them as is feasibly possible while cramming those few with as many computer racks as possible. It's simply more cost-effective to do so. It doesn't cost twice as much to cool a room with 200 servers as it does to cool a room with 100 servers. To the extent that on-site personnel are needed, one individual can monitor and maintain 200 servers almost as efficiently as they can watch and care for 100 servers.

Walmart's plan is diametrically opposed to the premise, though. That is, the retailer is considering setting up a few thousand mini cloud computing/access sites to provide higher-speed 5G data transfers, which will help facilitate the so-called edge computing necessary for the world to fully realize the potential of the Internet of Things. It's the right idea, but the forward-looking view of 5G and the Internet of Things arena is still murky at best.

As for physically bringing third-party providers and sellers into the operation, that's perhaps the biggest unknown of all. How will they be managed, or selected as a partner in the first place? What else has to happen, and who else needs to be hired to make that ambition a reality? A lack of answers to those questions should concern investors.

Don't read too much into the message. What Walmart doesn't know about the cloud computing business it can hire out. The company has also built a pretty solid logistics platform. Bringing outsiders into the mix isn't exactly an impossible task.

Every nickel and dime matters in retail, though, and constant attention is required just to keep customers from shopping elsewhere -- one of the nuances of an industry where last quarter's 3.2% same-store sales growth was considered a smashing success, but a not-much-worse growth pace of less than 3% could have been deemed disastrous. Remember, it took a highly focused effort on just the mere basics of retailing for McMillion to get the company back on track when he took the helm in 2014, but "back on track" is just a matter of a few basis points' worth of improvement. One can't help but become concerned that all of these non-core plans -- especially in the aggregate -- could be just enough distraction and just enough of an additional expense to gradually steer Walmart away from what's been the right course for a while now.

In other words, Walmart shouldn't try to fix what isn't broken.