Please ensure Javascript is enabled for purposes of website accessibility
Log In Help Join The Motley Fool
Free Article Join Over 1 Million Premium Members And Get More In-Depth Stock Guidance and Research
By Daniel B. Kline - Updated Oct 8, 2019 at 1:00PM

Like rival Amazon, the retail giant is testing some employee programs that could someday evolve into offerings for the public.

Amazon (AMZN 0.14%) dipped another toe into the healthcare business last month, debuting a program for its employees called Amazon Care. The company hasn't spoken of any plans to expand it to the consumer market yet -- indeed, so far, only its Seattle employees and their families are eligible to sign up for the pilot program, which it describes as "a mobile application that allows you to access virtual and in-person healthcare service."

Nor it is part of Haven, Amazon's healthcare joint venture with Berkshire Hathaway and JPMorgan Chase. However, it's logical to assume that if the program proves successful within the company's walls, it will eventually be offered to the public.

Now, Walmart (WMT -0.32%) is following its retail rival into the healthcare market -- in a similarly small fashion -- by testing out some new healthcare options with some of its employees. It's a first step toward revamping its healthcare benefits and may eventually lead to a day when Walmart, too, connects its customers to the medical system. 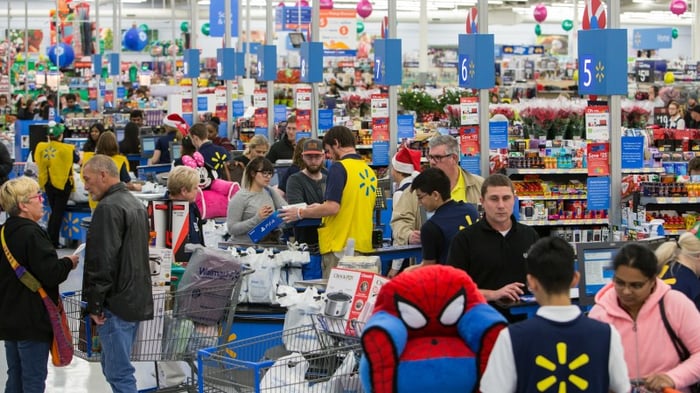 Walmart has a big opportunity

As the largest private employer in the United States, Walmart already provides healthcare coverage to more than 1 million employees and their family members. Lisa Woods, the company's senior director of U.S. benefits, is tasked with finding healthcare solutions for them.

She pioneered its pilot Centers of Excellence program, which connects participating employees with "top specialists for certain serious medical conditions and procedures, giving them easy access to the best, most appropriate care possible and helping avoid misdiagnoses," according to a press release.

Among the program's wins so far, it led to the discovery that among participating employees who had been told they required spinal surgery, more than half didn't actually need such an invasive treatment. As a result, they were steered toward different options, which led to faster recoveries at lower costs.

"Associates came back saying, 'I didn't know healthcare could look like this,'" Woods said. "They asked us to bring the same transparency, effectiveness, and quality of care to their communities."

Woods has been listening to her company's employees, and that has led to some new tests that will roll out during 2020. These include:

Both Walmart and Amazon seem to understand how daunting the healthcare system can be even for people who do have insurance. Their programs -- which are admittedly in their early stages -- may someday provide blueprints for consumer-facing efforts.

What's clear is that removing pain points and making it easier for people to get quality medical care are key goals of both companies. Telemedicine and technology can make it easier for consumers to access healthcare. Figuring out how to offer those services at scale -- first in-house, and then in a way that broadly appeals to customers -- remains something that companies needed to figure out. Both, however, are off to promising starts.

John Mackey, CEO of Whole Foods Market, an Amazon subsidiary, is a member of The Motley Fool’s board of directors. Daniel B. Kline has no position in any of the stocks mentioned. The Motley Fool owns shares of and recommends Amazon. The Motley Fool has a disclosure policy.