Please ensure Javascript is enabled for purposes of website accessibility
Log In Help Join The Motley Fool
Free Article Join Over 1 Million Premium Members And Get More In-Depth Stock Guidance and Research
By Rhian Hunt - Jan 28, 2020 at 7:32AM

Henrik Fisker is back with big plans and few details -- should Tesla sweat it?

The all-electric Model X SUV by Tesla (TSLA -0.48%), debuted in 2015, is still America's No. 1 seller when it comes to electric sport-utility vehicles.

However, the Model X may soon face a challenger. Henrik Fisker, an electric vehicle entrepreneur, is back with another project. The Fisker Ocean, an all-electric SUV, throws down a budget-friendly gauntlet to the Model X with a price tag half of the Tesla SUV's base price. It also boasts a slew of eco-sensitive features for drivers yearning to save the planet while enjoying a sweet new ride. Should Tesla -- and Tesla investors-- worry about the upcoming massive price undercut, or does Elon Musk still have a lockdown on the electric SUV market whatever Fisker offers?

On the surface, Fisker's newly unveiled Ocean SUV looks like a strong contender against the Model X. Touted as the "world's most sustainable vehicle," the Ocean features a solar panel roof that, the company claims, provides 1,000 miles' worth of charging annually. 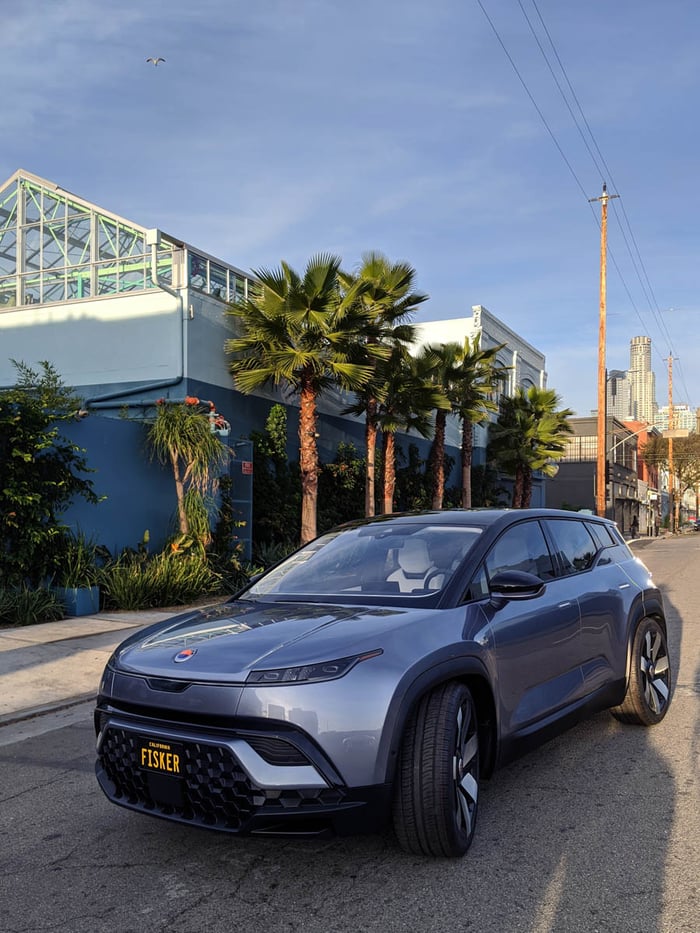 The company's recent press release about features also claims 200 miles of range on half an hour of charging. This puts it at a slight disadvantage to the Tesla Model X's claimed 115 miles of charge in 15 minutes (or 230 miles for half an hour), but possibly not enough to offset other advantages.

Other selling features designed to appeal to the eco-conscious include what Fisker calls a "vegan interior." The seat upholstery is soft "eco-suede" that's actually a polyester fiber made from recycled t-shirts, plastic garbage, and beverage bottles. The carpets come from recycled nylon fishing nets retrieved from the sea, and other surfaces are polycarbonate.

Of course, the biggest potential selling point is the Fisker Ocean's purported price tag. The company is currently claiming a $37,499 base price, which can allegedly be slashed to around $30,000 through Federal tax credits. This is less than half the Model X's 2019 $84,990 sticker price. Even the high-end, premium trim of the Ocean SUV will cost around $60,000, still less than the cheapest Model X.

With its aggressively low pricing, Fisker may be hoping to profit from the trend of people buying affordable vehicles rather than choosing a big brand name regardless of price. This generational change in market preferences appears clearly in the ongoing problems of Harley-Davidson (HOG 2.23%), while Ski-Doo maker BRP Inc. (DOOO 0.02%) offers diverse, budget-friendly powersports vehicles and motorcycles and enjoys robust growth. Similar factors are central to the good financial condition of Polaris (PII -2.09%), too. Fisker may be relying on this trend to give the Ocean a big edge over the Model X -- but the SUV market and the powersports market do not necessarily experience the same trends.

The Ocean SUV isn't Fisker's first rodeo in the all-electric vehicle market. Fisker's first try in 2007 saw the production of less than 3,000 Fisker Karma sedans by Fisker Automotive. The company eventually foundered due to battery problems, the destruction of many vehicles by Hurricane Sandy, and the exit of Fisker himself in 2013, ending in bankruptcy and acquisition by China's Wanxiang Group.

Now launching his second company, Henrik Fisker remains tight-lipped about the Ocean's production and financial backing. He claims to have backers with deep pockets, funding, and partner companies with production capacity that can manufacture 1 million Ocean SUVs over six years, from 2022 to 2027 -- all to be revealed at the March 2020 Geneva Auto Show. Perhaps pertinently, the original Fisker Automotive had more than $528 million in funding, which nevertheless didn't prevent its 2013 demise.

Tesla and Tesla investors can rest easy for now

On the surface, Fisker's Ocean SUV looks like a potential threat to Tesla's dominance in the American all-electric vehicle market. A highly affordable all-electric SUV that pushes some of the right "social issues" buttons (vegan, partly solar-powered, eco-friendly) for the young, trendsetting, but perhaps not affluent, demographic seems like it could be a formidable competitor for Tesla's high-cost SUV, in theory at least.

However, the obstacles before Fisker are perhaps even stronger than its much-hyped advantages. The market for electric and hybrid vehicles remains stubbornly small: according to Edmunds, just 2% of total vehicle sales in the U.S. during 2019. Tesla's sales of all models accounted for approximately 1.3% of U.S. vehicle sales in 2019, or 65% of the EV and hybrid market. Tesla is even more dominant if only all-electric vehicles are considered, coming in at around 80% of sales in 2018.

In effect, Tesla can rely on a massive "goodwill premium" among electric car buyers to equalize demand despite price. Even if Fisker manages to produce large numbers of Ocean SUVs at the promised low price, making a dent in Tesla's potent market superiority will probably prove impossible. People seem to want the Tesla name, style, and branding. While there's always a chance Fisker might pull off a surprise, Tesla's ongoing predominance seems assured, simply because it's Tesla. If you're investing in auto stocks and have an interest in all-electric vehicle makers, Tesla is in my opinion still a very good buy, both in the short and long terms.