Keeping up its recent story of success, BRP Inc. (NASDAQ:DOOO) managed to outdo the projections of leading analysts with very strong earnings-per-share growth and hard-charging sales. The powersports vehicle maker maintains its position as a worthy rival to Polaris (NYSE:PII), which also grew but at a far slower pace. BRP's nimble, diversified approach contrasts sharply with Harley-Davidson (NYSE:HOG), which continues to focus on a limited range of costly vehicles. In fact, recent news suggests BRP has its finger on the pulse of the future in both the international market and in the field of electric powersports.

Bringing its latest product ideas to the glitzy streets of Las Vegas, BRP showed off no less than six e-vehicle prototypes at a Sept. 10 demo. With interest in electric-powered vehicles continuing to charge up across the USA and the world, its "Club BRP 2020 Global Product Reveal" included a Sonic e-kart, a Sea-Doo personal watercraft, a basic scooter, a motorcycle, and two types of three-wheeler. The models currently remain in the testing and prototype phase, but they show BRP's determination to keep up with the eco-conscious e-vehicle trend.

The electric motorcycle and three-wheeler designs are potential sources of notably strong sales. The low-cost three-wheeled Ryker is already a big hit with people looking for inexpensive outdoor fun, strongly outpacing the sales of rival Polaris' Slingshot three-wheeler, which costs approximately 2.5 times more. This year, the Ryker three-wheeler provided a 21% revenue increase for Q2 2019, despite a wet spring and early summer, which usually damps down sector sales.  An electric Ryker could potentially profit from two overlapping markets at once -- fans of the affordable Ryker experience and people who prefer e-vehicles or who live in countries with stringent emissions laws. 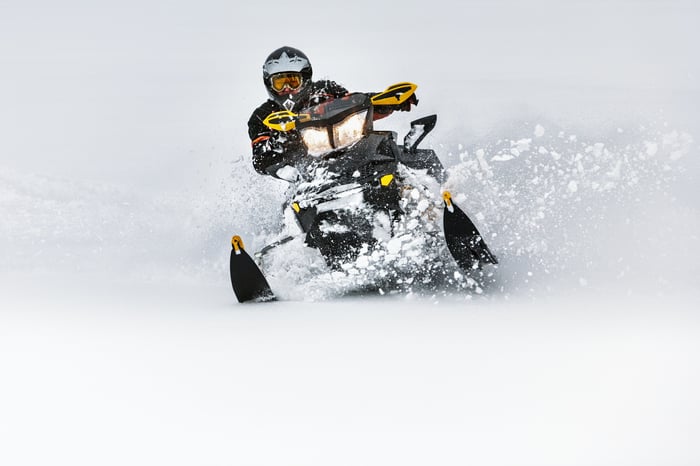 BRP's focus is the polar opposite of Harley-Davidson's approach, which consists of a narrow product range, high prices, and slow adoption of new technology. In fact, BRP bought up important assets of the cutting-edge Alta Motors e-motorcycle company in Feb. 2019, including patents, physical assets, and intellectual property, after Harley-Davidson dropped a brief partnership with the company in Aug. 2018, leaving the smaller company to crash and burn. Harley's decision to ditch the deal may have given BRP exactly what it needed to power ahead into a key emerging market, stealing yet another march on its lumbering competitor.

While BRP seems to be angling for affordable, fun e-vehicles of multiple types, its competitors have a more limited lineup. Harley-Davidson, true to form, recently launched a medium-sized e-motorcycle with a base price of approximately $30,000 before options. It offers no three-wheelers, thrifty urban mobility scooters, or other popular motorsports vehicles.

Polaris owns the GEM brand, manufacturer of small electric utility vehicles. Its CEO hinted at an electric Indian Motorcycle model and possibly an electric Slingshot three-wheeler during a 2017 interview, but concrete plans have thus far not materialized. Both the Slingshot and Indian Motorcycles share one of the modern powersports market weaknesses of Harley-Davidson -- high price -- which BRP deliberately avoids.

BRP remains on the right track

BRP's robust Q3 results exceeded analyst expectations with 12% earnings-per-share growth over forecast, supporting the idea that the company is still pursuing a winning strategy. Its $135.3 million net income, driven by a 24% rise in North American retail sales, boosted diluted earnings per share by 62%.

While operating expenses climbed by 17.1%, the majority of this spending went to investment in product development, the engine driving BRP's success. The company's net margin rose from 4.33% to 5.67% at the end of Q3 despite the expenditure. BRP's revised guidance for Q4 predicted a 19% to 23% year-over-year increase in normalized earnings per share (EPS).

Flexibility, diversification into a wide range of different products, forward-looking technology, and affordable vehicles are all necessary facets for a company to stay profitable in today's evolving powersports industry. Companies that stick to limited product ranges and high price tags, such as Harley-Davidson, face stagnation and even collapse. BRP seems determined to stay at the forefront of success with its aggressive but well-balanced push into low-cost vehicles and e-vehicles, making a worthwhile investment opportunity.