Please ensure Javascript is enabled for purposes of website accessibility
Log In Help Join The Motley Fool
Free Article Join Over 1 Million Premium Members And Get More In-Depth Stock Guidance and Research
By Rich Smith - Feb 2, 2020 at 7:13AM

Boeing's breakout XS-1 will never fly -- but several other spaceplanes and small rockets will.

It's been more than a half decade since we first told you about the XS-1 -- a project of the Defense Advanced Research Projects Agency, which aims to build an experimental spaceplane to cut the cost of satellite launch by approximately 10 times.

Ferrying medium-sized satellites to the very edge of space, XS-1 would then deploy rockets to blast the satellites the rest of the way into orbit. At a projected cost of $5 million per launch, XS-1 was supposed to offer access to orbit even cheaper than what SpaceX offers today...but now it never will. 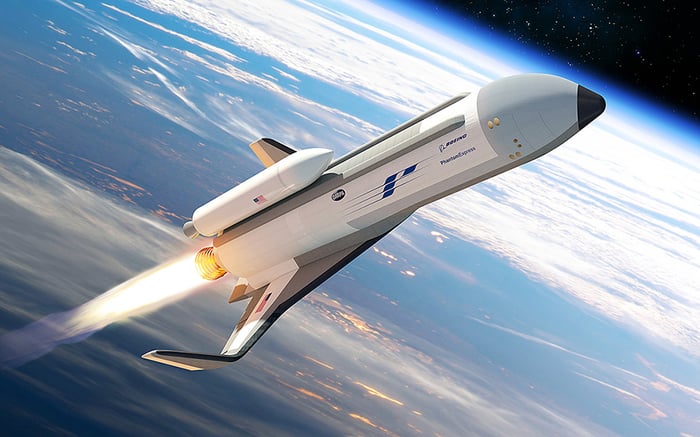 After examining phase 1 submissions from all three teams, though, DARPA was so impressed with Boeing's offering -- a spaceplane dubbed "Phantom Express" -- that it dumped Northrop's and Masten's teams from the competition. Going forward, contracts for both of the next two stages of development -- phases 2 and 3 -- would go to Boeing's team exclusively. (With one modification: Instead of partnering with Blue Origin, Boeing would equip its spaceplane with AR-22 engines developed by Aerojet Rocketdyne.)

DARPA ballyhooed the project, predicting Boeing's Phantom Express would become the "first of an entirely new class of hypersonic aircraft that would bolster national security by providing short-notice, low-cost access to space." Phase 2 work on the project was to wrap up by the end of 2019, and by now, we were supposed to be well into phase 3 -- flight testing of Phantom Express.

Except that it didn't, we aren't -- and now we never will.

...and then Boeing bows out

Last week, Boeing announced that it "is ending our role in the Experimental Spaceplane (XSP) program immediately."

It's unclear how much progress Boeing ultimately made on phase 2 of the XS-1 program (although its partner, Aerojet, apparently succeeded in demonstrating its AR-22 engine's suitability for reusable spaceflights). It's also unknown how much of the $146 million Boeing was to be paid for its work was actually earned.

What is clear is that Boeing's exit from XS-1 has doomed the project. As DARPA explained in a statement, Boeing's decision to cease work on the Phantom Express "effectively ends the XSP program."

So...end of story? Not quite. For one thing, while Boeing will no longer be moving forward in cooperation with DARPA on Phantom Express, the company said it still intends "to harvest the significant learnings from this effort and apply them as Boeing continues to seek ways to provide future responsive, reusable access to space." So even though abandoned, the XS-1 effort wasn't a total waste of time.

Nor is Boeing necessarily DARPA's only route to space, or its only means of driving down the cost of getting satellites into orbit. Indeed, it almost looks like events elsewhere have overtaken the XS-1 project.

As research into XS-1 was ongoing in the U.S., for example, over on the other side of the planet, New Zealand-based small-launch start-up Rocket Lab has been successfully firing off a series of small Electron rockets for more than a year. They carry small payloads to space for not much more than Phantom Express was supposed to cost -- about $6.5 million per mission. (In fact, Rocket Lab's 11th straight successful launch took place just Thursday.)

Over in the U.K., Sir Richard Branson, too, has been ramping up efforts to develop a reusable spaceplane, his "SpaceShipTwo," which will be used to fly tourists to space. He's also modified a Boeing (yes, there's some irony here) 747-400 dubbed "Cosmic Girl," which will be used to shoot satellites into space aboard LauncherOne rockets -- much like XS-1 was supposed to do.

Granted, LauncherOne will have a payload of only 500 kilograms, versus XS-1's targeted 1,360 kilogram payload, and its launch cost will probably be $10 million or so, not $5 million. Then again, LauncherOne looks like it will actually be built and operated, whereas Phantom Express...won't.

For that matter, even back here at home, Sierra Nevada is planning to begin running supply missions to the International Space Station sometime next year, utilizing its own Dream Chaser reusable spaceplane.

Long story short, the demise of DARPA's XS-1 project may seem like a disappointment today. But given all the other new options under development -- or even already in use -- within a few years, I suspect the now-abandoned Phantom Express will not be missed.