Designed to fly "10 times in 10 days," the unmanned XS-1 will rocket to the edge of space and then fire a different rocket to launch payloads into orbit -- never leaving the atmosphere itself, and never actually entering orbit. Instead, after delivering its cargo the XS-1 will return to land on Earth like an airplane. In contrast to the actual space shuttle, which famously cost about $1 billion a mission to fly, XS-1 aims to deliver up to 3,000 pounds of cargo to orbit for just $5 million per flight. 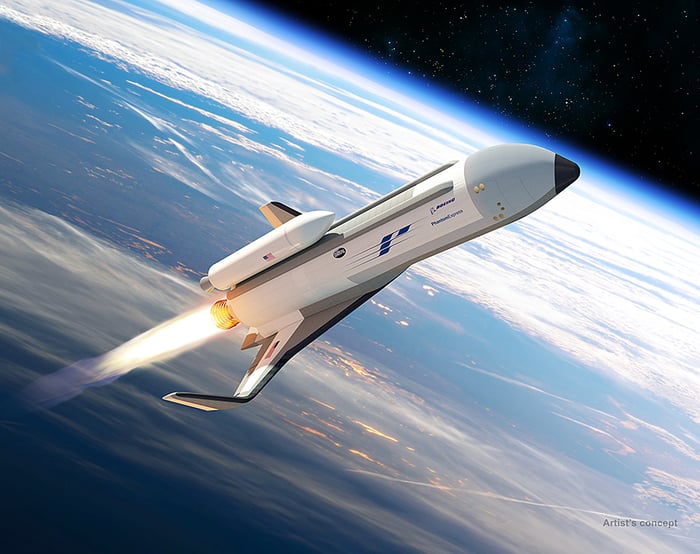 NASA has hired privately held Vector to build the second-stage "rocket" that will push payloads the last mile into orbit, using Vector's internally developed Vector-R rocket for this purpose. The question up till now, though, has been who would build the spaceplane itself. Would it be:

Now we know the answer: It's Boeing ... and Aerojet Rocketdyne (NYSE:AJRD).

Boeing wins the prize -- but not Blue Origin

On Wednesday, May 24, DARPA made its announcement: Boeing will "build and fly an experimental vehicle for aircraft-like access to space." Dubbed the Boeing Phantom Express, this will be the "first of an entirely new class of hypersonic aircraft that would bolster national security by providing short-notice, low-cost access to space." After Boeing successfully completed phase 1 of the XS-1 competition, DARPA has tapped the company to proceed through phases 2 and 3 as well -- fabrication and flight.

And yet, Boeing's victory seems to have left Blue Origin in the lurch. Somewhere between 2014, when Boeing entered this competition, and this week, when Boeing won it, Blue Origin appears to have fallen off the Boeing team, to be replaced by Blue Origin's rocket-building rival Aerojet Rocketdyne.

According to DARPA's press release, "the XS-1 technology demonstrator's propulsion system is an Aerojet Rocketdyne AR-22 engine, a version of the legacy Space Shuttle main engine (SSME)." In confirmation of this, Aerojet issued its own press release on Wednesday, stating that "Aerojet Rocketdyne is a member of the Boeing team" and that it has been "selected to provide the main propulsion for the Boeing and the U.S. Defense Advanced Research Projects Agency (DARPA) reusable Experimental Spaceplane (XS-1)."

So it's official now: DARPA will proceed with building its spaceplane, with Boeing and Aerojet Rocketdyne doing the work. So what happens now?

According to DARPA, Boeing and Aerojet Rocketdyne now move into phase 2 of the project, transforming XS-1 from concept into aircraft. This should be accomplished before the end of 2019, and will include at least 10 test-firings of the Phantom Express' engines over the course of 10 days.

This accomplished, the companies will proceed to phase 3 in 2020, running between 12 and 15 flight tests to prove the aircraft can actually fly 10 times in 10 days. Ultimately, DARPA will ask its contractors to demonstrate Phantom Express' ability to hit flight speeds of Mach 10, and launch a demonstration payload weighing between 900 and 3,000 pounds into low-earth orbit.

If they succeed in doing this, they'll prove the ability to put a pound of payload in orbit for as little as $1,700 -- and change the economics of spaceflight forever.