Please ensure Javascript is enabled for purposes of website accessibility
Log In Help Join The Motley Fool
Free Article Join Over 1 Million Premium Members And Get More In-Depth Stock Guidance and Research
By Rich Smith - Oct 8, 2016 at 8:13AM

A recent entrant into the space market, Vector Space Systems lands a pair of high-profile contracts from the U.S. government. 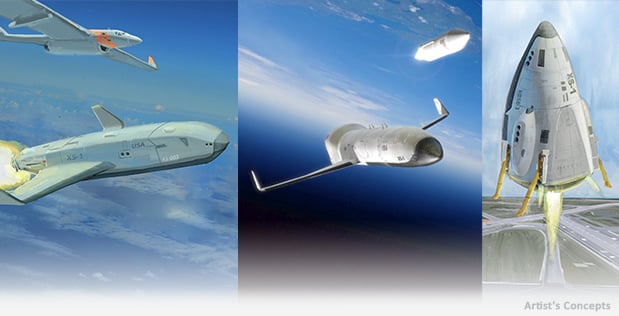 DARPA wants a new space shuttle. It's getting close to building one. And in fact, it just got a little bit closer.

Last month, in a little-noticed press release, privately held Vector Space Systems confirmed that it has won $2.5 million worth of contracts from the Defense Advanced Research Projects Agency (DARPA) and the National Aeronautics and Space Administration (NASA). Through these contracts, Vector -- which hasn't even begun operations yet, although it has begun collecting clients -- aims to play a major part in the designing of DARPA's XS-1 Experimental Spaceplane -- and potentially, in new NASA projects as well.

As Vector explains, the contracts break down as follows: First, Vector will tweak its first-stage "Vector-R" rocket for use as a second-stage rocket on DARPA's spaceplane. Second, Vector will develop a smaller "advanced prototype" Vector-R upper stage -- this time for NASA.

Success in both efforts should accelerate Vector's progress toward building "a fully functional two-stage flight test vehicle" for itself, as well as advancing DARPA's and NASA's respective objectives. Flight testing to prove is slated to begin late next year.

Back up a second. Remind me: What is a "spaceplane"?

NASA, as you'll recall, retired the space shuttle in 2011 -- partially because of concerns over the vessel's safety, but also over concerns for its cost. DARPA's XS-1 Spaceplane project aims to address both of these concerns by developing a new "drone" spacecraft that will fly to the verge of space under its own power and there launch a smaller onboard rocket to boost satellite payloads the last few miles into actual orbit. That accomplished, XS-1 will land back on Earth like an airplane (or space shuttle), refuel, reload, and be ready to launch a new payload within 24 hours.

In fact, DARPA is targeting turnaround times and consistency of operation that would permit XS-1 to launch "10 times in 10 days."

As an unmanned drone, XS-1 would allay concerns about the safety of live cargo. And with launches taking place daily, rather than just a few times a year, the cost of building XS-1 would be spread out among so many deliveries as to dramatically decrease the cost of space launch -- perhaps to as little as $5 million for a two-ton cargo.

So far, three industry teams have been hired to work on prototyping a spaceplane for DARPA: Boeing (BA -2.48%), working in collaboration with Jeff Bezos' Blue Origin; Northrop Grumman (NOC 1.16%), working with Sir Richard Branson's Virgin Galactic; and privately held Masten Space Systems, working with also-private XCOR Aerospace. (XCOR, however, appears to be in the process of shuttering its Lynx spaceplane project, and may be on its way out.)

Vector describes its new Vector-R launch vehicle as "the world's only launch vehicle dedicated to servicing the micro satellite market by providing a dedicated 50kg launch mass to orbit." Comprising a "carbon fiber airframe, lightweight pressurized propulsion systems and an agile modern avionics system," Vector-R targets the fast-growing market for launching very small satellites, rapidly and at low cost -- and leaves Boeing, Lockheed Martin, Airbus, and SpaceX to duke it out over the market for launching larger satellites.

In its final form as a "fully functional two-stage" rocket, Vector-R will be the vehicle Vector uses to launch microsatellites into space. In the meantime, in between time, Jim Cantrell, CEO of Vector Space, says Vector-R's first-stage engine will be designed "platform agnostic" for its role as the spaceplane's delivery rocket.

That is to say, regardless of whether DARPA ultimately chooses a prototype spaceplane from the Boeing team, from Northrop, or from Masten, Vector's rocket will launch equally well from any of them.

Experts estimate that by 2020, companies could be launching as many as 500 such "microsatellites" annually. At launch prices ranging from $250,000 per launch (CubeCab) to $1.5 million (Vector) to $10 million (Virgin Galactic), that implies an annual market size of up to $5 billion -- a market in which Vector is targeting a 12% share.

When you get right down to it, it doesn't really matter where the money is coming from. As long as the checks clear, Vector will take it.