Streaming video may soon go the way of cable TV, and Apple (NASDAQ:AAPL) isn't wasting any time building a bundle of channels. Apple TV+ subscribers can now add ViacomCBS's (NASDAQ:VIAC) CBS All Access and Showtime streaming services for an additional $9.99 per month. That price is less than subscribing to Showtime alone, which Apple sells as a Channel for $10.99 per month.

ViacomCBS has reportedly been in talks with Apple and other over-the-top distributors like Amazon (NASDAQ:AMZN) and Roku (NASDAQ:ROKU) since November. With the ViacomCBS deal in place, Apple might look to other small media companies to grow the bundle and make the Apple TV app consumers' primary streaming destination instead of Netflix or Amazon. 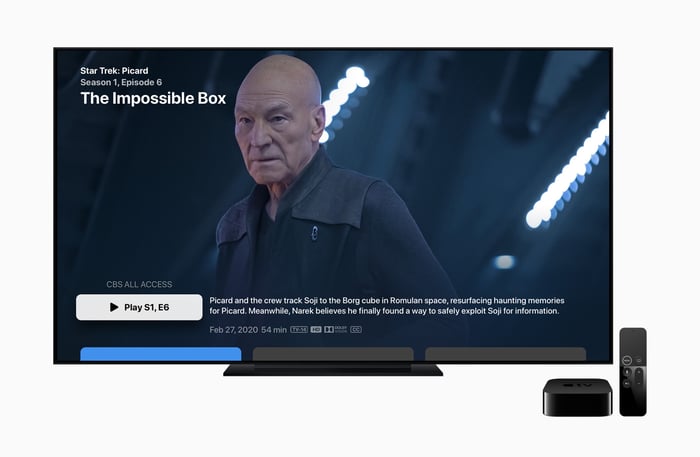 Even as more competitors enter the streaming arena, the market leaders are increasing their dominance. Netflix, Amazon, and Disney have been gaining viewing hours faster than the competition over the last six months.

For smaller competitors to stand out on their own, they need to spend a lot on marketing, technology, and content, and they simply can't compete with the industry giants. Establishing more robust partnerships with distributors, including offering new streaming services in bundles, will help draw an audience. Some smaller companies are already partnering with distributors -- both traditional pay-TV providers and connected-TV leaders like Amazon.

The challenge for Apple and others pursuing a bundling strategy is keeping the selection focused so streaming bundles don't suffer the same fate as cable bundles. Consumers have rejected subscribing to dozens of channels they never watch just to get the handful of channels they want. And with the a la carte nature of streaming services, finding that balance is essential. If the bundle becomes too expensive, consumers will drop the whole thing and only subscribe to the channels they really want.

ViacomCBS is in a good position as the first media company to partner with Apple to bundle its streaming services with Apple TV+. That entry could be a catalyst to spur other small media companies to offer bundle terms if they fear being left out of the game entirely.

Another way to fulfill the goal of Apple TV+

It's important to note that in order to get the special pricing for CBS All Access plus Showtime, consumers must also subscribe to Apple TV+. While practically all of Apple's current Apple TV+ subscribers are currently on free trials, many will see those trials end in November and December. The bundled offer could encourage some consumers to renew their service while Apple keeps working to establish a strong content library.

But the real goal of Apple TV+ was to get more consumers to use the Apple TV app and subscribe to Apple TV Channels. Apple TV Channels gives Apple more room to generate profits through wholesale agreements in which it can control the price instead of simply taking the standard 15% to 30% cut from in-app subscriptions. The distribution model also gives Apple more control over subscriber data and offers additional opportunities for Apple to sell new services through recommendations.

Tying the bundle to Apple TV+ and the Apple TV app reinforces the consumer behavior Apple is trying to foster. It should lead to greater subscription services revenue, better subscriber retention, and ultimately more device sales -- where Apple makes its real money.

It's no surprise that Amazon and Roku are interested in bundling services as well and that they're fighting hard to keep distribution rights to high-profile streaming services. They, along with Apple, have a lot to gain from increased customer loyalty.

ViacomCBS's deal with Apple is likely just the start of streaming video bundles.