Please ensure Javascript is enabled for purposes of website accessibility
Log In Help Join The Motley Fool
Free Article Join Over 1 Million Premium Members And Get More In-Depth Stock Guidance and Research
By Keith Noonan – Aug 28, 2020 at 6:30AM

These companies have huge growth potential and relatively little downside risk compared to most penny stocks.

Penny stocks are known for being volatile, having very low share prices, and for representing stakes in very small companies with highly speculative outlooks. The propensity for extreme volatility means that penny stocks sometimes deliver huge returns, but it's also true that the category has a terrible track record of burning investors.

If you're seeking explosive returns, focusing on slightly larger companies that have proven revenue streams and trade on major stock exchanges is a much better way to go. This superior approach still leaves investors plenty of room to embrace volatility and look for companies with discounted valuations and big growth potential. Within that mold, Impinj (PI -4.11%), Eros STX (ESGC), and Zuora (ZUO -4.48%) are three promising small-cap stocks that have seen substantial sell-offs this year.

Here's why you should consider adding them to your portfolio. 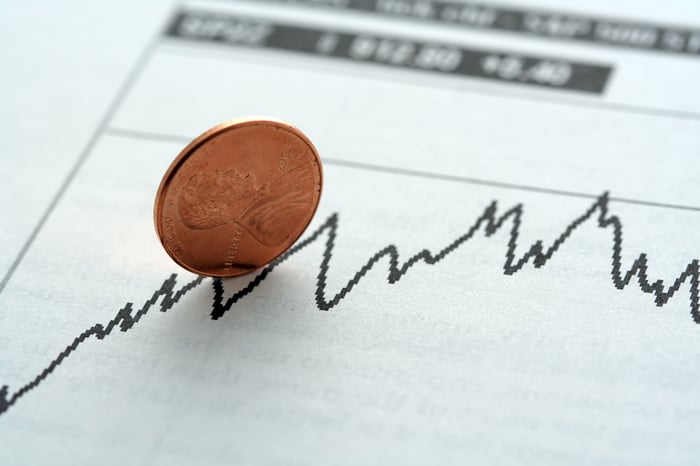 Impinj is a semiconductor specialist valued at roughly $530 million that specializes in radio frequency identification (RFID) technology. The company's share price is down roughly 10% year to date and 38% over the last year. Recent declines for the stock have stemmed from pressures that the coronavirus has put on retailers, which are currently the largest market for Impinj's products.

Impinj's RFID tags can transmit information to sensors without the need for a power source, allowing them to be discreetly attached to objects including clothing or packaging. The data picked up by sensors can then be used to take inventory, monitor consumer demand, and prevent theft and counterfeiting. Information stored on RFID chips can also be updated.

Investors willing to weather near-term headwinds in pursuit of big returns should consider treating the sell-offs spurred by weak retail demand as an opportunity to build a position in the company's stock. Retail should see a recovery as pressures from the virus ease, and Impinj has huge growth avenues in other market segments.

The company's products are already being used by airlines, manufacturers, and hospitals, and there will likely be a surge in new use cases for RFID tag and sensor technologies over the next decade. As just one example, vials for coronavirus vaccines could be outfitted with RFID tags in order to track supply and record where inventory was distributed and administered. Mapping demand for Impinj's products involves some speculation, but the stock has explosive potential.

Indian entertainment and streaming company Eros completed its merger with U.S.-based film and television production company STX at the end of July. The combined company is now operating under the name Eros STX, and its stock stands out as an appealing play on the growth of streaming video in India.

Eros STX has a massive collection of licenses for Indian films and has been the country's box-office leader over the last decade. The company also operates one of the country's top subscription streaming platforms, and it's ramping up content production to help build business in the Indian market and other territories.

Eros stock has been highly volatile, but it looks like a worthwhile play at current prices. The chart below tracks the company's share-price movement in 2020: 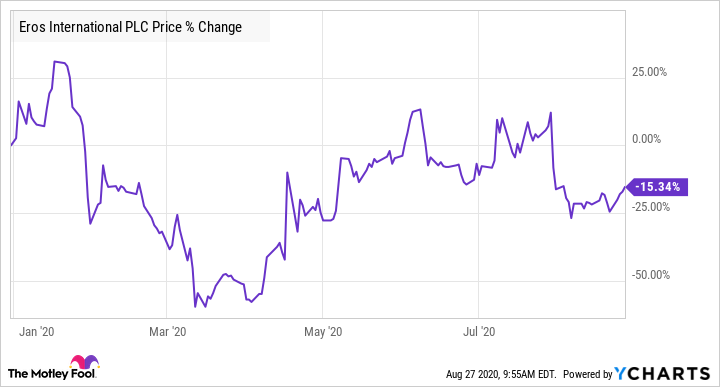 Adding some extra context, Eros shares have more than doubled over the last year but are down approximately 69% over the last three years. Eros STX has a market capitalization of roughly $540 million and will likely continue to see volatile trading. However, the company looks cheaply valued.

Management expects that growth for streaming subscriptions will allow the business to record revenue of $1 billion in 2022, and Eros STX is currently valued at around half that figure. Even if the video-streaming specialist falls short of that sales target, it wouldn't be surprising to see the stock surge over the next few years.

Zuora is a company that provides software that allows businesses to easily implement and automate subscription-based payment systems. The last decade has seen big growth for the adoption of subscription-based business models, but economic uncertainty created by the coronavirus pandemic has made it more challenging for Zuora to bring new companies on board its platform.

The stock is down roughly 10% year to date and nearly two-thirds from the all-time high it hit in July 2018. However, the long-term outlook for Zuora and the broader subscription economy remains strong.

The number of customers using subscription business models and requiring related support services will almost certainly see substantial growth over the next decade. Subscription business tends to be more predictable and profitable over the long term, and companies with businesses built around recurring revenue streams have also held up well in the coronavirus pandemic. While average revenue for companies in the S&P 500 index fell 2% year over year in the first quarter, companies in Zuora's subscription index saw their sales climb 9.5% in the same period.

Zuora is valued at roughly $1.3 billion and trades at approximately five times this year's expected sales -- an attractive multiple for a cloud-software company that's leading its niche and has a large and expanding addressable market ahead of it.

Got $3,000 to Invest? These 3 Digital Media Stocks Could Make You Rich