Please ensure Javascript is enabled for purposes of website accessibility
Log In Help Join The Motley Fool
Free Article Join Over 1 Million Premium Members And Get More In-Depth Stock Guidance and Research
By Billy Duberstein – Updated Sep 4, 2020 at 11:47AM

Be careful with these high-flying stocks -- they could come back down to Earth soon.

The technology sector has been on an absolute tear this year during the COVID-19 pandemic, with the Nasdaq composite up over 40% in 2020. Of course, after this miraculous run and during a recession, one or two market darlings may be on the verge of a pullback, or even something much worse. As we get into the second half of the year, investors should remember the phrase from Warren Buffett's teacher Ben Graham: "In the short run, the market is a voting machine, but in the long run, it is a weighing machine."

In that light, investors should be extremely cautious about the following three stocks that I don't think are quite heavy enough to justify their current valuations. 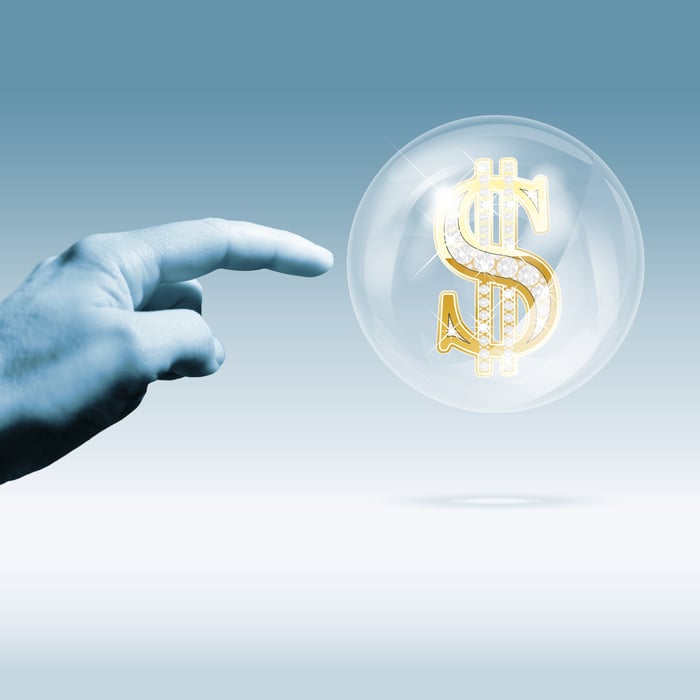 On May 1, Tesla (TSLA -4.06%) CEO Elon Musk tweeted, "Tesla stock price is too high imo." It's only logical that the stock has tripled since then, right? And oh, by the way, the company just filed to sell $5 billion worth of shares to the public in order to raise more money, despite having a comfortable $8.6 billion on its balance sheet at the end of last quarter.

There are lots of vocal Tesla bears out there, but I'm not necessarily one of them. I'm actually very impressed with the company and its execution under Elon Musk. However, the stock is up almost 500% on the year, and it appears this last leg higher has to do with the company's Aug. 11 announcement of a stock split rather than any sort of fundamental reason.  Stock splits don't add any value to a company whatsoever, but rather increase the number of shares and decrease the stock price by an equivalent amount. Some may suspect that a lower share price, which split from about $2,500 to roughly $500, could lure more retail investors to the stock. But with more online brokerages now offering purchases of fractional shares, I'm not sure the stock split will be that impactful -- and in any case, stock splits don't affect a company's intrinsic value at all.

Now that the stock is split, investors should focus on what Tesla must accomplish to justify its $400 billion-plus market capitalization. Over the past year, Tesla has made $25 billion in revenue and just $376 million in net income, but those profits were padded by $1 billion of regulatory credits.

Obviously, investors think Tesla is going to go on to dominate the nascent electric vehicle era. But think about this: The leading automaker by volume today is Volkswagen (VWAGY -2.87%), which sold 11 million cars last year. Its market cap is only $87 billion -- one-fifth that of Tesla!

Tesla's average selling price (ASP) per vehicle was about $52,271 last quarter, not including regulatory credits. As Tesla caters more and more to the mass market with its Model 3 and Model Y vehicles, its ASPs should trend down. If -- and it's a big "if" -- Tesla can eventually sell as many cars as Volkswagen at $45,000 per unit, it would make roughly $500 billion in revenue at some point. But most car companies only have single-digit margins. If Tesla makes a mass-market hit, it will likely only earn, let's say, a 6% net margin, which would be about $30 billion in net income.

At $400 billion, that's already about 13-14 times earnings, which is about in line with where leading car companies Volkswagen and Toyota (TM 0.03%) trade today. 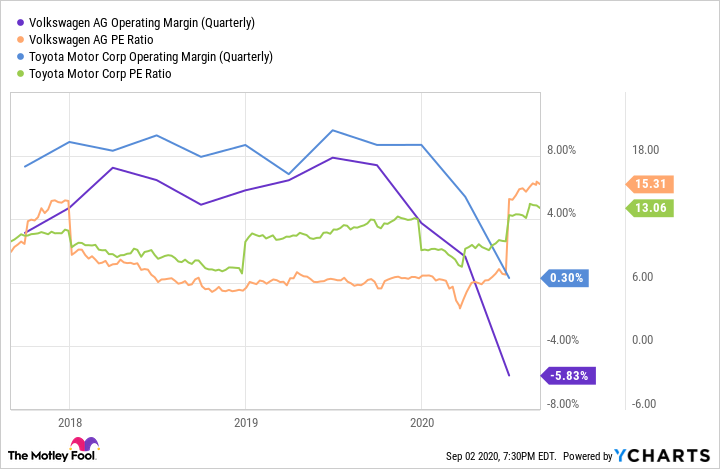 The only problem? Tesla will only deliver about 500,000 vehicles this year. It will also have to invest to grow production 20 times over to make that much money, and that takes a lot of capital. Tesla isn't like a software company that can grow a lot without much incremental investment. In order to get to the above numbers, Tesla will have to build new plants and run them at full volume. That will require more debt or shareholder dilution over a period of 10 years or more.

In addition, there is an onslaught of competition in EVs coming from both Volkswagen, Toyota, General Motors, and just about every other mature car company on earth. In addition, a slew of new Chinese EV start-ups, including Nio and Li Auto, have made a big splash in a short amount of time.

Basically, Tesla's shareholders are assuming the company will become the largest in the world at industry-leading margins. Should the company slip up at all over the next few years, there could be a big sell-off after this epic run. 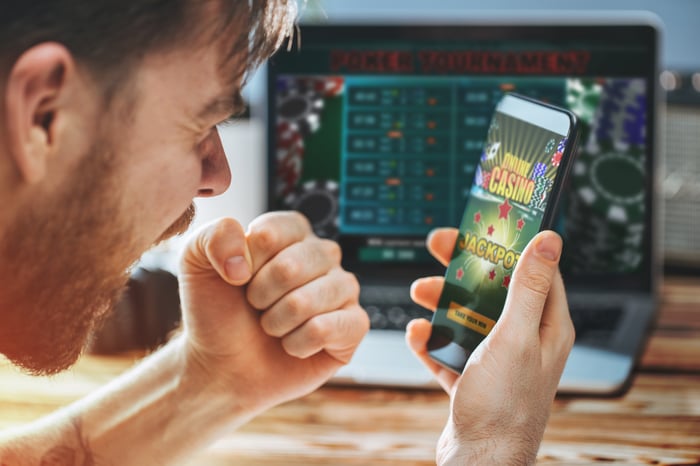 Shares of daily fantasy sports and online gambling company DraftKings (DKNG 3.55%) have almost quadrupled since April. That's when the company went public via a reverse merger, which is a way of going public without an IPO. The stock just keeps rising, as retail investors seem enthusiastic about the likelihood of more states legalizing sports betting in the near future. In addition, DraftKings stock shot up on news that basketball Hall of Famer Michael Jordan was joining the company as a special advisor, though he won't be involved in day-to-day management. For his creative input, Jordan will receive some stock as compensation.

But now that DraftKings' stock has nearly quadrupled, investors should be cautious. The company recently provided guidance of $500 million to $540 million in revenue this year, assuming all professional sports come back this fall except college football. Even in a pandemic-plagued year, revenue would be up an impressive 22% to 37%. However, with the company still bleeding cash and taking on hefty losses, and the stock now trading at over $14 billion market capitalization (roughly 28 times estimated 2020 sales), the market is pricing in all kinds of good news.

While DraftKings has certainly benefited as an online gaming pure play in the U.S., it's by no means without competition. The company has to contend with the likes of Fanduel parent Flutter Entertainment. Brick-and mortar casino operators are also getting into the game; Penn Gaming, for example, took a large stake in digital sports site Barstool Sports in early 2020 and will use its brand for online gaming. This year has also seen internet business operator IAC/Interactive take a 12% stake in MGM Resorts, which has a proprietary online sports gambling platform called BetMGM. I'm not sure DraftKings' name recognition is any kind of moat against these big brands all coming for a piece of the pie.

Aside from ample competition and seemingly low barriers to entry, DraftKings also has to contend with regulation. It's not like the entire country is opening up to online gambling. Nineteen states are now live, and four more have passed legislation. But 12 states, including populous ones like California and Florida, recently rejected online gambling bills. The market thus might not grow as fast as bulls think. In addition, I can definitely see a scenario in which online gambling companies face further regulatory scrutiny or higher taxes, especially for headline risks related to gambling problems during an economic recession. 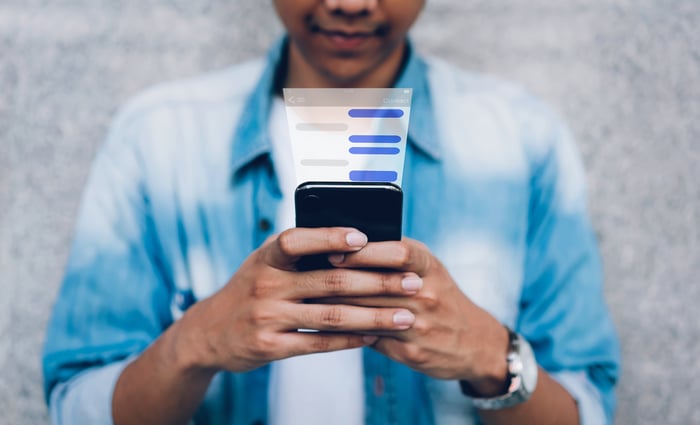 I know, I know. Twilio (TWLO -1.64%) is a Fool favorite. I've even written favorably on the stock before -- though that was when Twilio was trading at less than half its current price. At the current $38 billion market cap, the company is trading at 26 times sales. There are other software-as-a-service companies that trade at similarly high valuations, but most of those have higher gross margins than Twilio, which logged just a 52.2% gross margin last quarter. Several SaaS peers have either maintained or accelerated their growth during the pandemic, like Zoom Video or Shopify.

While Twilio logged a solid-looking 46% organic growth last quarter, that was a small deceleration from the first quarter's 48%, and management guided to just between 36% and 38% growth next quarter. The company's gross margins actually declined year over year during the last quarter as well, from 54.5% in 2019 to 52.2% in 2020.

I expected better from Twilio, given that businesses are likely scrambling to reach customers through digital messaging, which is the company's bread and butter. Given the deceleration in revenue and gross margin pressure, I wonder if there may be some competitive headwinds afoot, or if the addressable market is smaller than management has let on. In any case, the results to me don't seem to justify the stock's 178% appreciation year to date.

Management might also be aware of this. Shortly after its second-quarter earnings release, Twilio sold about $1.25 billion in stock at levels close to today's price, despite already having more than $1.9 billion in cash on the balance sheet.

As with Tesla, Twilio's competitive threats may be underestimated, and I'm unsure that the company can actually make the margins investors hope to see down the road. With management selling shares at these prices even with ample cash on the balance sheet, I'd be wary of buying.