Please ensure Javascript is enabled for purposes of website accessibility
Log In Help Join The Motley Fool
Free Article Join Over 1 Million Premium Members And Get More In-Depth Stock Guidance and Research
By Alex Dumortier, CFA - Updated Aug 31, 2020 at 8:01AM

Did Tesla alter its accounting for its major profit engine?

"It has long been an axiom of mine that the little things are infinitely the most important." -Sir Arthur Conan Doyle, The Adventures of Sherlock Holmes

Earlier this year, electric car manufacturer Tesla (TSLA -0.15%) made what might seem like a minor change to its first quarter report. Many shareholders may not have noticed that an obscure sentence vanished from the notes to the consolidated financial statements, but it may interest them to know that billions of dollars could be riding on that single sentence, for Tesla chief executive Elon Musk, personally, and for the company.

There's one principle you should always remember when examining a company in depth:

There are no haphazard changes to company reports.

During the preparation of these reports, all changes are mooted, reviewed, and approved by multiple professionals, especially when they relate to a vital aspect of the company's business. Though it may not always be obvious, there is an explanation beyond whim for every change that is made. In many cases, the nature of the change is straightforward or inconsequential for investors, but it's important to identify and understand any changes that are consequential and opaque. 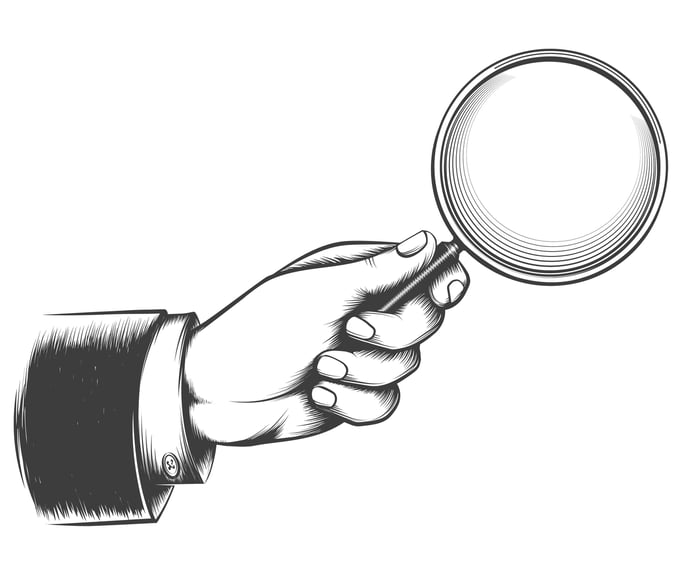 You may be surprised to learn that part of Tesla's automotive revenue  doesn't come from selling automobiles at all. Here's how that works:

By virtue of selling electric vehicles, Tesla receives   automotive regulatory credits. Because it's an all-electric auto manufacturer, Tesla receives a surplus of such credits relative to the minimum required to meet government emissions standards and other regulatory requirements. Tesla sells those surplus credits to traditional automakers, whose limited electric vehicle production means they wouldn't otherwise achieve compliance with regulatory standards.

Regulatory credit sales don't get the attention they deserve, perhaps because they represent a small percentage of Tesla's total revenue. However, credit sales contribute an outsized proportion Tesla's profits (on those occasions when Tesla is profitable) because every dollar in regulatory credit revenue contributes a dollar in gross profit, compared to just $0.20 in gross profit for every other dollar of automotive revenue.

Over the trailing 12 months to June 30, Tesla has booked over $1 billion in regulatory credit revenue. While that number accounts for less than 5% of Tesla's total revenue over that period, it contributed a whopping 85% of operating profits.

Revving up the regulatory credit engine

In the first quarter, regulatory credit revenue ramped up faster than a Chinese Gigafactory (see graph below). In fact, regulatory credits were responsible for a tidy 125% of Tesla's operating profits in the March quarter, what with the auto manufacturing business continuing to lose money. 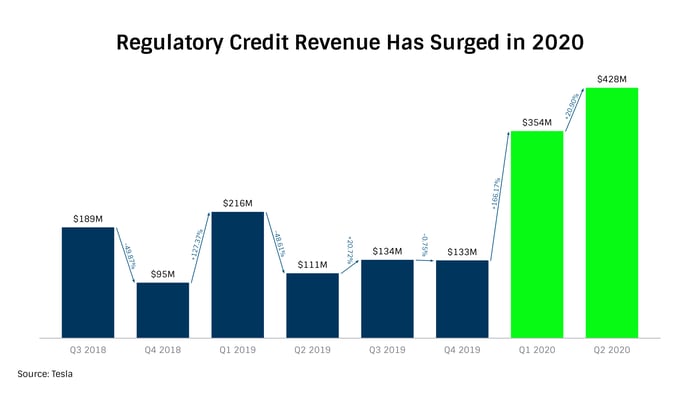 In plain terms: Regulatory credit sales are the only thing lifting Tesla's head above water, in terms of profitability. So having established that regulatory credit revenues are vital to Tesla's financial results, how did the financial reporting change?

The vanishing sentence that could be worth billions

This is the first time since it became a public company that Tesla has failed to include in a quarterly or annual report language describing its revenue recognition policy for regulatory credit sales, either specifically, or under the banner of automotive revenues (barring the reports spanning the first three quarters of 2017, where the company invoked an update in accounting standards for the treatment of customer contracts that it was in the process of evaluating).

Then, as quickly as it had vanished, the language reappeared in the latest report for the quarter to June 30. Why was the first quarter different? What happened during this period? It's worth making a few observations regarding the timing of the omission.

Running on regulatory credits, Tesla drives up to the S&P 500

In the first quarter, regulatory credit revenue surged to $354 million, nearly triple the figure in the previous quarter, enabling Tesla to eke out a tiny $16 million GAAP profit. GAAP, or Generally Accepted Accounting Principles, is the body of rules that dictate the way in which companies must perform their financial reporting.

In the second quarter, regulatory credit revenue spiked another 21% to $428 million and Tesla recorded another GAAP profit of $104 million. This marked a first in the company's history: Four consecutive profitable quarters.

That milestone isn't just good for gloating, it has significant financial implications, as it fulfills an eligibility criterion for inclusion in the S&P 500 Index, which requires four consecutive quarters with a positive cumulative profit; this was Tesla's only outstanding eligibility criterion.

(Meeting the criteria ensures eligibility only, not admission to this select club, which is at the discretion of S&P Dow Jones Indices' U.S. Index Committee.)

A new, significant, and stable source of demand for Tesla shares

Beyond the prestige associated with being part of the benchmark index for U.S. stocks, being added to the index creates a new, significant, and stable source of demand for a stock: Index funds must buy shares in order to reflect the new component. The huge run-up in Tesla shares this year may be partially attributable to speculators getting in ahead of this demand.

A back-of-the-envelope calculation is useful to put these speculators' rationale in context. At the close on Tuesday, August 25, Tesla had a float-adjusted market capitalization of just over $300 billion, which would equate to a weight of roughly 1.1% in the S&P 500. According to S&P Dow Jones Indices, approximately $4.6 trillion in assets are indexed on the S&P 500  ; as such, index funds, collectively, would need to buy nearly $50 billion worth of Tesla shares to fully reflect that 1.1% weight, or 16% of the shares outstanding currently available for trading.

Now that we've got some idea of the stakes associated with inclusion in the S&P 500, let's nail down how Tesla came to be on the cusp of this prize. At June 30, Tesla's cumulative GAAP profit for the trailing four quarters was $356 million (excluding discontinued operations and exceptional items). To put that number in perspective, it's roughly the same as the $354 million in profits Tesla booked from regulatory credit sales in the first quarter alone. 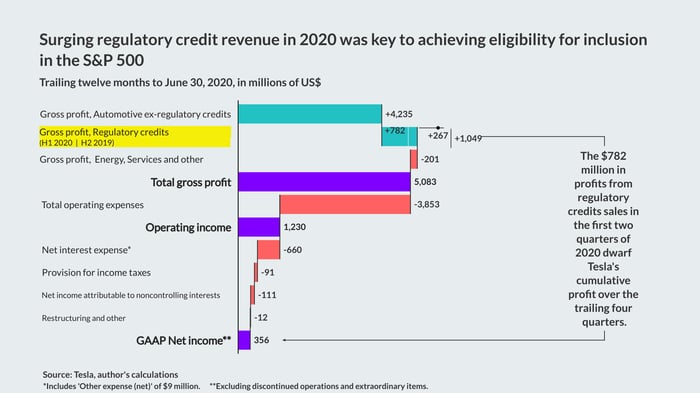 Let there be no ambiguity about it: Without the sharp increase in profits from regulatory credits that began in the first quarter, the notion of adding Tesla to the S&P 500 wouldn't be getting so much as a once-over by the folks on the U.S. Index Committee at S&P Dow Jones Indices.

The increase in regulatory credit revenue was also vital to the pursuit of another important milestone, one that is very dear to Tesla chief executive Elon Musk's pocketbook.

In 2018, the automaker instituted a new compensation plan for Mr. Musk, the "CEO Performance Award." Explaining its full mechanics -- and problems -- would require a separate article, but the massive award vests in 12 tranches based on $50 billion increments in Tesla's market capitalization, starting at $100 billion.

To unlock each tranche, the corresponding market capitalization milestone must be paired with one of 16 operational milestones, eight of which are based on revenue and the other eight on profitability, as measured by Adjusted EBITDA (earnings before interest, taxes, depreciation and amortization). Crucially, each operational milestone sets a level of annualized revenue (or annualized adjusted EBITDA) the company must attain in each of four consecutive quarters.

The Adjusted EBITDA milestones are where regulatory credit revenue really get the opportunity to shine, thanks to their outsized impact on operating profits (they boast a 100% profit margin, you'll recall).

By the numbers: In the first quarter, regulatory credit revenue contributed 37% of the $951 million in adjusted EBITDA (see graph below), up from just 11% in the previous quarter. 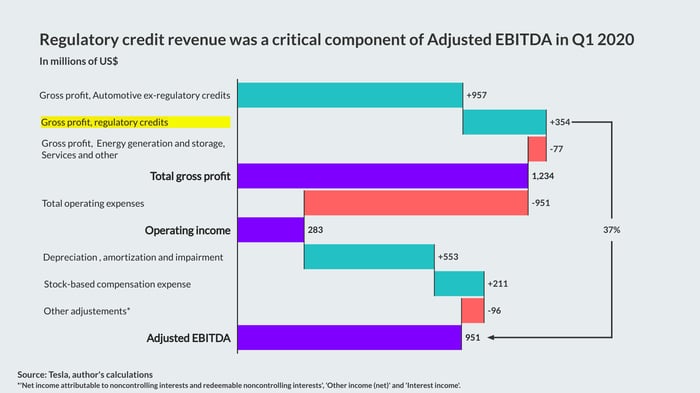 Ordering up an extra tranche of Award cake

That performance kept Tesla on track to achieve the second Annualized Adjusted EBITDA milestone of $3 billion, which had already been met in the third and fourth quarters of 2019. Remember, the milestone must be met in four consecutive quarters, so if Tesla had failed to meet the mark in the first quarter, that would have "reset the clock," delaying the completion of this Adjusted EBITDA milestone -- and the vesting of the corresponding tranche -- for at least another nine months.

The company now expects the third tranche of the CEO Performance Award to vest in the current quarter based on Tesla's current stock price, and the $3 billion Adjusted EBITDA milestone, which it completed with the second quarter's results (regulatory credits again contributed over a third of adjusted EBITDA).

Let's sum up what we've learned:

These observations don't prove that Tesla manipulated the accounting of its regulatory credit sales, but they raise some questions regarding incentive, means, and opportunity.

The author contacted multiple representatives of Tesla's Communications and Investor Relations department by email for comment, but received no reply as of the time of publication.