While investing in young, unproven growth stocks entails some risk, the potential for absolutely massive gains makes the journey worthwhile. After all, the huge payoff from finding just one long-term winner like an Amazon.com (NASDAQ:AMZN) or Netflix (NASDAQ:NFLX) in its early days can make up for several investments that don't work out.

How does one go about looking for monster stocks in the making? While finding the next Amazon or Netflix isn't easy, the monster stocks of the future are likely to have several attributes in common:

Often, these stocks come to market at expensive valuations and can thus be volatile from quarter to quarter. However, if held for the long term, these seemingly expensive stocks can pay off big, as long as these factors are present.

Here are three such stocks with monster potential that you can buy today. 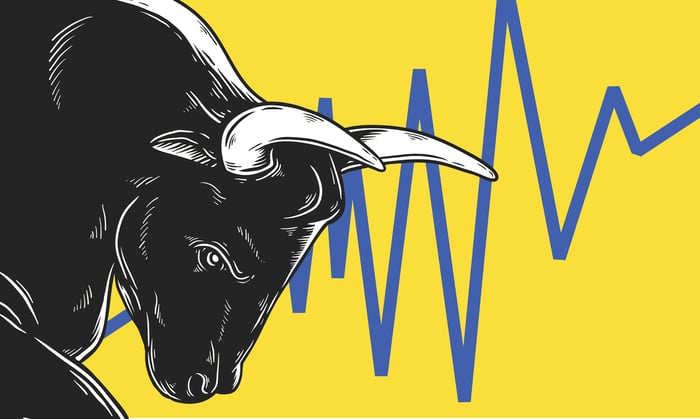 All-star tech breakout Twilio (NYSE:TWLO) has actually cooled off over the past few months, but that could be an opportunity for investors. Twilio is a disruptor in cloud-based communications, which enterprises use to communicate internally, as well as with their customers in a seamless and secure fashion. The company's February acquisition of secure email company SendGrid rounded out Twilio's communications portfolio, making it a one-stop shop for voice, text, video, SMS two-factor authentication, "smart" call centers, or email communications.

Under the stewardship of co-founder and CEO Jeff Lawson, Twilio has soared since its June 2016 IPO at a mere $15 per share. Three-and-a-half years later, Twilio's stock currently sits at a whopping $99 per share, over six times its IPO price.

Despite its meteoric rise, Twilio still has loads of potential. IT research firm Gartner predicts that global enterprise spending on commuications will increase to nearly $1.39 trillion in 2020. That compares with Twilio's trailing-12-month revenue of just $1 billion. Last quarter, Twilio grew revenue by nearly 75%, or 47% excluding the effect of the Sendgrid acquisition.

Clearly, customers are finding a lot of usefulness in Twilio's platform, yet the stock is actually down about 33% from its all-time highs, as even this breakneck growth slightly underwhelmed expectations last quarter. A billing issue with one of Twilio's internal systems also caused a $5 million hit to revenue, leading to a further sell-off. Long-term investors may thus want to pounce on the newly discounted shares.

Carvana (NYSE:CVNA), like Twilio, has absolutely trounced the market since its initial public offering in April of 2017. Also like Twilio, the company debuted on the market at $15 per share. Though the online used-car dealer's stock initially fell following its IPO, Carvana's breakneck growth eventually turned sentiment around, and the stock has skyrocketed to $97 as of this writing.

Founded by CEO Ernest Garcia III, Carvana began as a subsidiary of Garcia's father's used-car dealership DriveTime in 2012, before being spun off into its own company. Carvana offers a completely online, hassle-free used-car buying experience that doesn't require customers to walk into a dealership and haggle with salespeople. The value proposition is highly attractive to a modern consumer who finds car salesmen untrustworthy and are used to exploring deep online inventory on other e-commerce platforms.

Carvana grabbed a leadership position in online used-car buying early and is investing heavily to solidify that lead. The company is on track to sell some 175,000 cars this year, up from just 2,105 in 2014, and has grown its nationwide inventory to 25,000 available cars. The company has posted a remarkable 23 straight quarters of triple-digit growth, which justifies its continued net losses amid its heavy investments and geographical expansion. That's because, despite Carvana's outstanding growth to date, its opportunity remains massive.

Carvana still only covers markets encompassing 66.9% of the U.S. population, and management thinks that it can reach 90% penetration over time. Yet even in the company's biggest market of Atlanta, it only has 1.9% of the local market. Overall, Carvana's total market share in the U.S. used-car market is only 0.4%. This market remains highly fragmented, with the top 100 used-car retailers only making up 7% of used-car sales nationwide.

That means Carvana's best growth days could still be ahead of it. This is why it could still be a monster stock in the making, even though it's already run so far to date.

Finally, for those willing to take a bit more risk, an obscure company from across the Pacific Ocean just sold American Depositary Shares (ADS) on December 13 that may warrant your attention. China's OneConnect (NYSE:OCFT) is a financial-technology platform that was developed by insurance giant Ping An. Its 12 software modules use the latest artificial intelligence (AI) and blockchain technologies to help financial institutions digitize their sales and marketing, product development, risk management, regulatory compliance, customer service, asset-liability matching, and other infrastructure services.

OneConnect sold about 31.2 million ADS at $10 per share, or about 9% of the company, at a valuation of just $3.7 billion. But that's actually a far cry from the $7.5 billion valuation the company received in a funding round earlier in the year and below the company's initial IPO target of $12-$14 per share.

Investors appear to be more skittish over high-growth, money-losing companies than they were earlier in the year, and Oneconnect is still burning through cash like there's no tomorrow. While revenue grew an impressive 72% in the first nine months of the year, net losses fell by an even wider amount (81.2%), as the company continues to invest heavily in new technology and services for its clients, and many of them don't pay much or anything to OneConnect initially.

However, there's reason to think OneConnect could eventually turn profitable in the years ahead. The company counts 99% of Chinese banks and 46% of insurance companies as clients, and that's despite the fact that OneConnect is a subsidiary of Ping An, which itself is a large competitor insurer and bank. OneConnect continues to rack-up customers at a fast pace, with its customer count growing from 1,600 in 2016 to 3,500 at the end of 2018, with premium customers -- or those that spend over 100,000 Chinese renminbi per year -- increasing from just 40 in 2017 to 221 in 2018.

What investors may be missing is that OneConnect has been deliberate in monetizing its customer base to date, with many of its customers paying little or no money to start using its services. That makes it easy for clients to get hooked on OneConnect's products, which greatly improve efficiency and profitability. Once customers do start paying, services are mostly tied to usage. Therefore, the more successful their customers become, OneConnect's revenues and profits should follow.

OneConnect's employees are also heavily incentivized in its success, as several key employees own a large portion of shares, with a large pool of shares set aside for employee compensation that's already part of the diluted share count.

As is the case with the previous stocks mentioned, OneConnect's addressable market is huge. Financial-technology spending in China is forecast to grow by over 20% over the next five years, as China's financial-services sector isn't yet mature, with many institutions still dependent on manual processes. In addition, OneConnect has quickly expanded outside China all over southeast Asia in just the past two years and has already racked up many prominent customer wins with large banks and governments.

Digital transformation will be key to any Asian bank or insurer's success going forward, and that likely means the usage of OneConnect's services. That's why, for all the pessimism, OneConenct remains a potential monster stock in the making.