A mixed day for stocks didn't stop the S&P 500 Index (SNPINDEX:^GSPC) from moving 18 points higher on Sept. 15, with the massive tech sector leading the way. The Technology Select Sector SPDR (NYSEMKT:XLK), which tracks the tech stocks in the S&P 500, was up more than 1% today.

The tech sector makes up almost 30% of the index's total value, giving it an outsize impact on the S&P 500's daily movements, particularly the tech behemoths at the top of the market cap stack. For instance, one of today's best-performing tech stocks was Adobe Systems (NASDAQ:ADBE), with shares gaining 2.4% after the company reported its third fiscal quarter results. 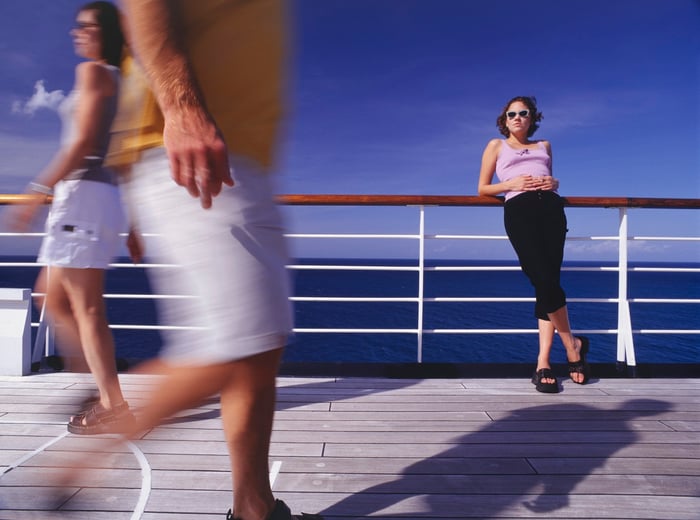 On the downside today, Carnival (NYSE:CCL) shares fell almost 11% when the company released preliminary fiscal third quarter results that sorely disappointed investors who were expecting a big loss, but not a billion-dollar stock offering.

In other notable news, Apple (NASDAQ:AAPL) got consumers excited when it announced a spate of new products and services, while Kraft Heinz (NASDAQ:KHC) announced a $3 billion deal to offload most of its cheese business.

Carnival cashing in, shareholders getting out

Carnival's preliminary results were largely expected, with the company announcing it lost $2.9 billion in its fiscal third quarter as the industry still remains largely unable to return to the seas. Carnival has started some limited voyages with its Costa and AIDA lines, but barring a combination of fast, accurate, and cheap testing, better treatments, and widespread vaccines, the coronavirus pandemic will keep the industry stuck at port.

Possibly the biggest reason Carnival shares fell sharply today was the news that the company would sell another $1 billion in stock to raise more cash, watering down investors who've bought on the hopes the company already had enough cash to ride out a prolonged downturn.

The giant of all tech giants unveiled a number of new gadgets today, including adding to its lineup of Apple Watch products. The Series 6 models will add a blood oxygen sensor, while the addition of the sub-$300 Apple Watch SE will likely pull more consumers into the Apple Watch ecosystem.

The Cupertino giant unveiled Apple Fitness+, a service built specifically around the Apple Watch. For $9.99 per month, users will have access to a wide selection of exercise content, including videos, designed to engage and support a healthy lifestyle. The company also rolled out a series of bundles of various Apple services, something that should attract some customers to add new content at a lower price prior to the bundling offerings.

Apple also announced updates to the iPad line, now in its 8th generation, including faster and more capable processors, and a completely redesigned iPad Air.

Looking for an update on the new 5G iPhone? You'll have to wait a little longer. The company plans to hold an iPhone event later this year.

In exchange for $3.2 billion, the packaged food giant maybe best-known by Americans for its Mac & Cheese is indeed selling a large portion of its cheese business to Groupe Lactalis. The deal includes some recognized Kraft brands including Cheez Whiz (which one can argue isn't even cheese) and international production of Velveeta, but other brands including Cracker Barrel, Knudsen, and Breakstone's that aren't as identified as part of the bigger brand.

The sale looks to be largely about addressing the Kraft Heinz balance sheet, with is bloated with $29 billion in debt that continues to weigh on the company. Management said it would use the proceeds from the deal, which is expected to close in 2021, to pay down debt.