The company will keep a few cheese brands, but most will go to Lactalis.

Just hours after announcing a new, upbeat outlook and active strategic plan, Kraft Heinz (KHC -0.99%) made public a $3.2 billion deal to sell off many of its major cheese brands to Groupe Lactalis. The move is apparently part of Kraft Heinz's strategic streamlining of its business, with CEO Miguel Patricio saying in a statement the sale "is a great example of agile portfolio management at work."

The $3.2 billion Groupe Lactalis is forking over to acquire the food giant's "Natural, Grated, Cultured and Specialty cheese businesses" is nearly double the $1.8 billion the cheese brands added to Kraft Heinz's coffers over the past 12 months, according to the press release. The brands involved include the international branch of Cheez Whiz, along with the American branches of Cracker Barrel, Polly-O, Hoffman's, Athenos, Knudsen, and Breakstone's. There will also be a perpetual license for international production of Velveeta cheese. 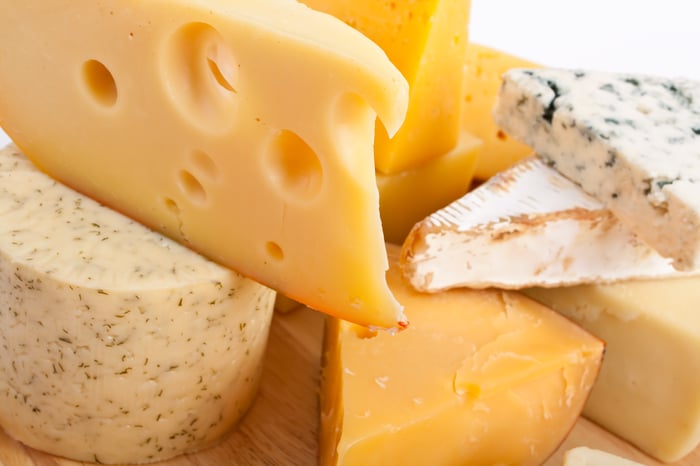 Lactalis is also taking over four production and/or distribution facilities in the United States. The facilities are slated to continue operating as normal and will keep the same workforce, simply with a different employer, according to Kraft Heinz. Kraft Heinz, for its part, is retaining a handful of cream cheese, processed cheese, and cheese sauce brands.

The company says it has earmarked its $3.2 billion cash infusion to pay down its debt. In its morning guidance report, Kraft Heinz stated it plans to reduce its net leverage to under 4 times by year-end, though at that time it only mentioned efficiency gains and reinvestment of conserved money into growth opportunities as the means to achieve that goal.

The Lactalis cheese deal will close in the first part of 2021, assuming it receives regulatory approval.